“…the confusion between the real and the marvelous… is the essence of enchantment.”–Jean-Louis Bory on Peau d’âne

PLOT: The Blue King lives happily in a fairy tale castle with his beautiful wife, his beautiful daughter, and his magic donkey who shits treasure. When the Queen dies, she makes the King swear that he will only marry a woman more beautiful than she is; unfortunately, the only woman meeting that description is his daughter. Seeking to escape a coerced marriage to her father, the Princess consults her fairy godmother, who advises her to put on the donkey’s skin and flee the kingdom to live as a scullery maid. 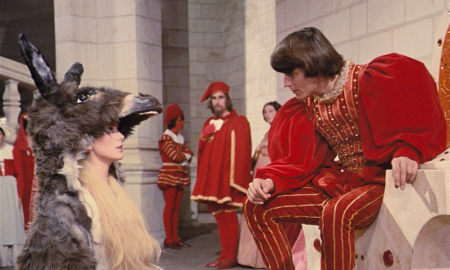 WHAT MAKES IT WEIRD: Picking a fairy tale to adapt into an all-ages musical, Demy goes for the one with the incest-based plot.

Trailer for restoration of Peau d’âne (Donkey Skin) (in French)

COMMENTS: The musical was not a major force in French cinema END_OF_DOCUMENT_TOKEN_TO_BE_REPLACED

Eugene Vasiliev provides 366 Weird Movies with his own translation/adaptation of his original article, which appeared in Russian here.

PLOT: Two lustful maids (and sisters) turn tricks in the attic, until caught red-handed by their housemistress. They ignore her remonstrances and calls to virtue. In fact, the two “guilty” servants thrash their mistress and her daughter to death after gouging out their eyes.

WHAT IT’S ABOUT: Domestic workers’ struggle for equal rights is sometimes an uphill battle.

Murderous Maids is based on a real case that shocked France in 1933, when the Papin sisters brutally murdered their employers. The film shows us how things went so bad in a very long and tedious way up until the denouement. The ruthless exploitation of the poor orphans, fated to live their lives at someone’s beck and call in a noble house, stirs up indignation in the viewer’s heart. Throughout the movie the unfortunate “feminists” are forced to iron clothes or scrub toilets.

Amazingly, the unholy acts that “the midnight maidens” do look innocent at first. They just relax for a moment in a bizarre position after vacuuming. Then something goes wrong. What we’ve got here is failure to communicate. They wish for the ground to swallow them up, but it doesn’t. The sisters then try to wipe out reality,  press the “DELETE” button, by gouging out the eyes of their mistress.

There was a trial, a society scandal, and a dungeon. In 1941 the younger sister–Lea Papin—was set free. She died at the age of 89, outliving her employers by almost 70 years.

PLOT: After serving 14 years behind bars for the murder of a promiscuous woman, a Greek man suddenly realizes that he was deeply wrong. He comes to believe true virtue isn’t found in fasting and praying, but in incest, sodomy, and other types of taboo love.

WHAT IT’S ABOUT: Cinema is an art of illusion.

The great French film theorist Jean Epstein noted in his book “Bonjour, Cinema” back in 1921: “The close-up alters drama through the impression of proximity. Pain is within reach. If I extend my arm, I touch your intimacy… I count the eyelashes of this suffering.”[efn_note](Epstein, “Bonjour Cinema,” p. 104).[/efn_note].

Extreme close-ups, zoom-ins and creepy music transform your perception of reality. Art can justify any sin, make black into white and END_OF_DOCUMENT_TOKEN_TO_BE_REPLACED

PLOT: The father of a bourgeois family brings home a white lab rat as a pet; taboos break and hilarity ensues as the rat has psychic (?) encounters with one family member after another. WHY IT SHOULD MAKE THE LIST: I asked my Magic 8-Ball about the List prospects of this Metamorphosis-as-a-French-comedy-of-manners with spontaneous homosexual awareness, paraplegia-onset sadomasochism, a mysterious pet rat, and a steady stream of patrician epigrams: “Signs point to ‘Yes’.”

COMMENTS: The spirit of Luis Buñuel lives on with François Ozon’s ultra-French take on the family comedy, Sitcom. All the Buñuel boxes (or, “boîtes”, if I may) are checked down the line: upper-middle class family, domestic setting, the crumbling of norms. Playing like its titular genre, Sitcom relies heavily on its capacity for clever silliness, while subverting that self-same genre’s cliched “Family meets Challenge to finish with a Happy Ending.” The family here, however, careens immediately over the edge, the challenge comes in the form of a possibly paranormal rat, and the happy ending is ripped straight from Kafka‘s long-forgotten “whimsical” period.

The unnamed father (François Marthouret) returns home one afternoon with a lab rat, adding a pet to his already very nuclear family. That evening a dinner party brings together the father, the mother (Évelyne Dandry), their son Nicolas (Adrien de Van), their daughter Sophie (Marina de Van), their Spanish maid María, and María’s Cameroonian husband, Abdu. Immediately beforehand, Nicolas has a moment alone with the rat, and at table he is restless until he announces out of the blue that he is homosexual. The mother recruits Abdu—a physical education teacher with experience counseling teenagers—to talk to her boy. As Abdu tries to work out his approach, he sees the rat, gets bitten by it, and then proceeds to help the son confirm his homosexuality in an altogether hands-on kind of way. In turn, each household member has his or her life-changing encounter with the rat.

While Sitcom is an ensemble piece, with each family member’s collapse and growth explored, the focus ends up, almost through omission, on the father. During his son’s discovery and embrace of homosexuality, his daughter’s failed suicide that turns her into both a paraplegic and a dyspeptic dominatrix, and his wife’s eventual seduction of the son, he remains impressively unflappable. When Sophie asks him if he knows about what happened between his wife and son, he remarks, “Of course”, adding, “I don’t think incest will solve the problems of Western Civilization, but your mother is an exceptional woman.” However, Sophie’s hopes of seducing her father are soon quashed when he admits he does not find her attractive. Having only aphoristic rejoinders to scandalous revelations, the father figure remains something of a cypher.

One hint is given during the opening dinner scene. The father delivers a monologue about the Ancient Greeks, musing, “Homosexuality was an institution with no shame.” Here’s a man who is quite probably gay himself, but he retreats into the trappings of bourgeois convention. And Ozon somehow litters other contemplative and tender moments throughout the zany norm-breaking silliness. Maria comforts Sophie’s much put-upon boyfriend in an NC-17+ kind of way in one scene, and things are kept impressively platonic as Nicolas washes his sister’s hair while talking about his encounter with their mother, both naked in the tub together. And so it goes. I’m not certain on the particulars of how I stumbled across this movie during college, but I saw it around the same time as Visitor Q. That’s appropriate, as I cannot think of two more feel-good family comedies.

“Francois Ozon’s absurd, outre “Sitcom” rips a page straight from the Luis Bunuel handbook of bourgeois contempt and writes a novella of relentless sociosexual ludicrousness brought to a Guignol head by the lab rat who’s moved in with the suburban family under siege… Ozon is seemingly attracted to our pop garbage, jamming a few sticks of Acme TNT in the structural silliness of our sitcoms and watching it go ‘boom.'” –Wesley Morris, San Francisco Examiner (contemporaneous)

“…after I saw Twin Peaks—Fire Walk With Me at Cannes, David Lynch has disappeared so far up his own ass that I have no desire to see another David Lynch movie until I hear something different. And you know, I loved him. I loved him.”–Quentin Tarantino

PLOT: The first thirty minutes cover the FBI investigation of the murder of Teresa Banks (an event referred to in the first season of “Twin Peaks”). The action then moves to the town of Twin Peaks, focusing on high school senior Laura Palmer, the beautiful homecoming queen who has a secret life as a cocaine addict and upscale prostitute. As her father begins acting strange and tensions inside her home grow, Laura goes to a “party” at a cabin in the woods, where tragedy strikes.

INDELIBLE IMAGE: The angel in the Red Room (although the curtains suddenly turn purple for this scene). It’s one of those tender moments Lynch likes to put in to remind his viewers that, no matter how much evil and perversion he throws onto the screen, he still unironically believes in the ultimate power of goodness, love, and salvation.

WHAT MAKES IT WEIRD: “Twin Peaks” is an uneven franchise, ranging over a landscape that covers everything from soap opera to surrealism and quirky comedy to rustic perversion, and so it may be appropriate that Fire Walk With Me is an uneven movie. The feature film continuation of the story is packed with dream sequences, unexpected cameos, mystical characters, and bizarre symbolism (an Arm eating creamed corn?). It was a financial and critical flop whose unremittingly dark and obscuritan tone turned off both casual series fans and mainstream critics, but for better or worse, David Lynch defiantly tears his own way through the universe he dearly loves.

Original trailer for Twin Peaks: Fire Walk With Me

COMMENTS: Early on in Fire Walk with Me, a woman in a red fright END_OF_DOCUMENT_TOKEN_TO_BE_REPLACED

“I have heard this insensible and necrophilous oath, ‘¡Viva la Muerte!’, and I, having spent my life writing paradoxes that have provoked the ire of those who do not understand what I have written, and being an expert in this matter, find this ridiculous paradox repellent.”–Miguel de Unamuno

PLOT: Fando is a boy growing up in Spain in the early days of the Franco regime, raised by his mother, about whom he has sexual fantasies. One day he discovers that his mother turned his father in to the authorities because of his “dangerous progressive” political views. In between fantasies, Fando decides to go searching for his father, but his quest is interrupted when he contracts tuberculosis.

INDELIBLE IMAGE: Fando’s papa, buried in the sand with only his head showing, and a quartet of riders fast approaching.

WHAT MAKES IT WEIRD: A howl of protest at the horrors of the Franco regime, as well as an autobiographical attempt to exorcise some serious mommy issues, Viva la Muerte uses surreal vignettes as a savage expression of personal outrage.