“I wanted to create a new world that was the equivalent of the birth of the Titans after Uranus and Gaia mated. The sky and the Earth. That’s where it comes from. The idea was to create a new humanity that is strong because it’s monstrous — and not the other way around. Monstrosity, for me, is always positive.”–Julia Ducournau

PLOT: After having a metal plate inserted into her skull following a car accident, young Alexia develops an empathic relationship with cars. She grows up to inhabit two careers—modeling at car shows and murder—and ends up impregnated after a one-night stand with a muscle car, and on the run from authorities who suspect her in a series of killings. Alexia assumes the identity of Adrien, the long-missing son of fire chief Vincent, and forms a relationship with him. 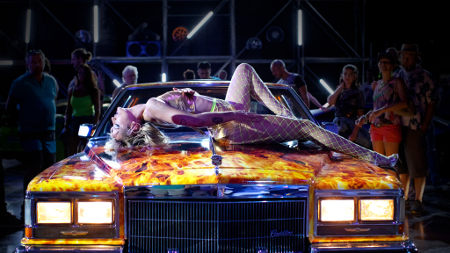 INDELIBLE IMAGE: Pregnancy can wreak havoc on a woman’s body, but the changes Alexia undergoes are especially acute. The rips in her skin revealing a metallic womb are quite unnerving, but nothing quite exemplifies Titane’s particular brand of maternal body horror as when she finds herself expressing motor oil through her breasts. Writhing in pain and oozing engine lubricant, her transformation is both disturbing and completely logical.

WHAT MAKES IT WEIRD: For its first half-hour, Titane is a perfectly unsettling account of a serial killer who has sex with cars. This would be game-set-match for many films hoping to earn a spot on our List, but the movie soon transforms into a meditation on gender identity, faith, and the ineffable pull of family. The sheer intensity of the characters’ pain and emotional burden is overwhelming, and Ducournau’s choice to filter these themes through outrageous story beats lends the film an operatic quality that heightens the entire tale.

COMMENTS: For Vincent, the mere idea of a DNA test is absurd. “You think I won’t know my own son?” Evidently he would not, since he brings home a young person who doesn’t really resemble his son in any meaningful respect. His co-workers are skeptical, and even his ex-wife immediately sees through the façade of her ersatz offspring. But Vincent never wavers, and soon makes clear that he is far from fooled, but rather enveloped in the grace of someone wanting to be his son. That power stands above all else, which means that he is the litmus test for Titane as a whole. He has seen all that has come before, and he remains steadfast in support of those he loves. Who among us can say the same?

How interesting that Alexia, under the guise of Adrien, is the one who comes into Vincent’s life. For Titane’s first third, we see the life of a woman who feels connected to no one. Her father’s disinterest leads to the car crash that disfigures her. Her utter lack of empathy causes her to hurt others without realizing it, and her inability to cope with the confusion and rejection seems in part responsible for her tendency to kill the people who force their way into her life. It’s why Alexia is such an amusingly bad killer: clumsy, lacking smoothness and savvy, not even cognizant of the presence of potential witnesses. She is incapable of seeing the world even five minutes ahead, so naturally she can’t even relate to people when she’s killing them. Her solution of stealing the identity of a 10-years-lost adolescent is perfectly on point, as she has no attachment to her own self and bears no regard (or possibly understanding) for the feelings of others. What she cannot fathom is that anyone will react to her with passion and need. She hasn’t reckoned on Vincent.

Both of these characters are operating at such a high level of intensity and disconnect from the expectations of polite society that it’s hardly surprising writer/director Ducournau had to go outside perceived ideas of normality to find the inciting event that brings them together: namely, Alexia getting knocked up by a souped-up Detroit hot-rod. Even as a child, we see that she is at pains to make connections outside of those she feels for automobiles, and the only times she feels empowered to express herself are when she is dancing atop vehicles. For her, gender lines are as blurry as those between man and machine. We love what we love.

More than one critic has described Titane as “body horror,” and while there is no shortage of cringe-worthy visuals, it’s really important to take a step back and ask what it is we’re finding so horrifying. Because much of what seems so awful falls under the category of “being a woman.” We have a hard enough time coping with breasts expressing milk or panties spotted with blood; swap in 10W-40 and we completely lose our cool. Alexia’s suggestive dances clock as aggressively forward and even inappropriate, but the unchecked dirty talk of a group of ruffians on a bus feels far more invasive and threatening. The shock is real, but the context thumbs its nose at notions of propriety. If this is indecent, Titane seems to say, your idea of decency is seriously flawed.

Even in a world where there are other movies about the romantic entanglements of young women and machines (must be something in the Seine), and even as part of a body of work that is centered on women and their complicated relationships with their bodies (see also her first short film, “Junior“), Titane manages to stand as an original. Its blend of gross-out visuals, unpredictable plot twists, and pure sincerity about its damaged characters provides power and credibility that set it apart. It is, most definitely, a custom job.

“Building a nightmarish dreamscape that Davids Lynch and Cronenberg would love, Ducournau puts Alexia on an increasingly weird journey… ‘Titane’ is so self-consciously transgressive and weird, that it’s difficult to discern who it’s for, besides fetishists, freak-flag fliers and fans of auteurism at its most hermetic and solipsistic.”–Ann Hornaday, The Washington Post (contemporaneous)

“Ducornau has real gifts as a story-teller but she has less clarity of purpose, at least so far. It’s a fabulously weird and original tale. Two fine lead performances carry us through the sometimes misty forests of meaning, to a finale that defies description. Seriously, OMG!”–Paul Byrnes, The Sydney Morning Herald (contemporaneous)

“Under Her Skin”, Vulture, October 5, 2021 – Julia Ducournau discusses her inspirations and writing process while reacting to works at the Museum of Modern Art in New York. (She discusses her ideas further in a separate Vulture interview.)

“Their Film Is One of the Weirdest Prize Winners of the Year. Deal With It.” – A twin profile of Ducournau and Rouselle from the October 1, 2021 New York Times (subscription required)

“The Current Debate: The Transgressiveness of Julia Ducournau’s ‘Titane’,” MUBI, October 7, 2021 – Leonardo Goi digests the film world’s discussion over whether Titane is meant to challenge or merely shock audiences.

Neon released Titane on Blu-ray (only) in January, 2022 (buy). The only extras on the disc are the trailer and a 23-minute Q&A with Ducournau, Rouselle, and Lindon, recorded at the New York Film Festival.

Where to watch Titane