PLOT: Mike Pinkney is an aspiring director living in East Hollywood, where he dreams of making his passion project: a remake of Carrie featuring an all-cat cast. No one is interested in his work, so he makes ends meet by working as a dog groomer, where he meets a beautiful woman who improbably agrees to go out on a date with him. Unfortunately, his run-down rental house suffers from a rat infestation that threatens to ruin his big chance with his dream girl. 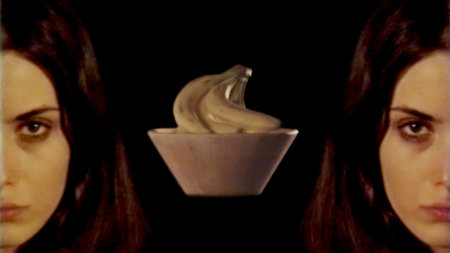 INDELIBLE IMAGE: Take your pick from two briefly glimpsed images from the climactic montage: a naked woman holding a bowl of rotting bananas while rats crawl over her, or a naked woman whose upper half is a banana. We’ll accept either answer. (If you’re looking for a non-nude pick, Sonja Kinski posing seductively with a DVD of Congo is your go to).

WHAT MAKES IT WEIRD: In She’s Allergic to Cats, dog groomer Mike Pinkney bashfully confesses to “making weird video art that nobody wants to watch.” He’s wrong. Somebody wants to watch this portrait of a pathetic artist struggling to make an all-cat version of Carrie while dealing with a rat infestation and an internal video monologue that consists of glitchy nightmares run through a circa 1989 public access AV board. That somebody is you.

COMMENTS: The old writer’s cliche is to “write what you know.” The danger of this advice, of course, is that, if every aspiring writer faithfully followed it, massive deforestation would result as slush piles overflowed with autobiographical novels about struggling novelists struggling to write their first novel, and autobiographical scripts about struggling filmmakers struggling to make their first film. The self-indulgent navel-gazing opus is a tricky proposition for established writers; for first-timers without an established navel to gaze at, it looks like a trap. And yet, sometimes, despite these dangers, the ploy can work, and work beautifully. Michael Reich’s She’s Allergic to Cats successfully navigates the minefield of self-reflexive works about the self-doubting artist, not so much avoiding cliches as tramping down hard on them, relishing the beautiful chaos of the resulting explosion.

There are a couple of elements that make Cats succeed where other experiments of its type might come off as insufferably self-indulgent. One is the movie’s embrace of absurdity, its ability to laugh at itself. There could hardly be a more ridiculous (yet plausible) day job for an aspiring artist than dog groomer. The opening montage features Mike Pinkney’s boss instructing his protegee, in velvety tones, on the art of grooming—“slowly and sensually, yes,” he croons seductively—as blurry slow-motion hands soap up a pooch and oh-so carefully snip the hair around its anus. The scene is simultaneously ominous—because of the low-frequency rumble mixed with canine woofs and whines on the soundtrack—and hilarious, because the groomer takes his vocation with an impossible degree of seriousness. It sets a mixed tone that the movie stays faithful to, mixing nightmarish mundanity with puckish mockery. In the movie, Pinkney is so consumed with doubt he can’t confront his landlord about the rat infestation without apologizing for bothering him. He’s so unlucky that he falls face-first into dog shit, which amuses a passing tow-truck driver to no end. The indignities he suffers are amplified by his producer and only friend Sebastian (played with broad Teutonic comedy by Flula Borg), an externalized voice of self-doubt who constantly reprimands the artist (“I say this because I am your friend… you are just a giant, sad, dirty man-baby.”) Pinkney’s social abasement is so grand and melodramatic that it’s a parody of artistic self-pity rather than a wallow in it. It’s hard for us to think of a man who dreams of a feline remake of Carrie as a great, misunderstood artist. Reich pokes fun at his own archetype; but at the same time, a sense of surreal danger constantly lurks in Cats‘ shadows. It’s an absurd, nightmarishly funny evocation of the life of a creative schlub trying to grind out a living in an indifferent L.A, and the comic scenes are like catching a spastic case of the giggles just as a panic attack is coming on.

Besides the humor, the second element that elevates Cats is Reich’s interjection of his own “weird” video art into the story. Greatly reminiscent of the retro-VHS aesthetics of fellow Los Angeles kitsch artists Everything is Terrible!, these lightning-paced montages are full of static, distortion, purposeful artifacting, superimposed images, and oversaturated and solarized colors spanning the low-tech VGA palette. Parts put me in mind of the then-avant-garde techniques used in 1982’s Liquid Sky. These moments show us Pinkney’s life work, but they also comprise his nightmares, his internal monologues, and, in the 12-minute climax, they serve as the movie’s final, in-your-face statement of artistic purpose. A movie about someone who makes “weird video art” should rightfully be full of examples of “weird video art”; and here, they aren’t just curious exhibits designed to amuse us for a brief moment, but integral components a larger narrative, and illustrations of the movie’s theme of cluttered creativity and its celebration of outsider aesthetics.

Cats teems with a rich vein of imagery, revolving around animals, eroticism, and art. Cats are right there in the title. The main character is a dog groomer. Felines and canines are conventionally opposed, and also traditionally represent the feminine and the masculine dichotomy. We also see rats, symbols of disorder and disease; and Cora somehow manages to associate ducklings with death. Then there’s a lost dog named Karma, and a man whose DVD collection consists entirely of talking animal films. The movie also makes major use of bananas, an obvious phallic symbol, which here are limp and rotten and nibbled on by rats. Art and sex are linked as the two great creative impulses. Cora may be more symbolic muse than flesh and blood woman. When she first meets Michael, the cmaera keeps Kinski out of focus or shows her only in silhouette, reinforcing our impression of her as someone unreal, perhaps even imaginary. (Beautiful women don’t come on to their dog groomers every day; and particularly not when he’s visibly nervous and making her pet’s nails bleed while cutting them.) All of the imagery Reich builds comes together at the climax, in a sprawling “weird video art” montage with torrents of blood, rotting bananas, flaming pet carriers, ghost cats, rats crawling over naked women, mutant woman/banana hybrids… The film randomly tosses you all the pieces to build your own allegory about the artistic process, without providing a strict blueprint to follow. The consistency of the imagery gives Cats coherence and personality, while the controlled delirium thrills us with an intoxicating sense of freedom.

The end result of all this is a surprising level of authenticity amidst the absurdity. The unglamorous East Hollywood locations, peopled by genuine eccentrics like the brash Sebastian and shifty-eyed hippie landlord Honey Davis—characters who somehow exist in the same milieu as Kiniski’s outwardly radiant but internally damaged dream woman—add to this effect. Hollywood is a weird place, especially when you’re an outsider dreaming of being an insider, but instead stuck clipping the hair of stars’ pets. Reich’s surrealist spin on this crazy milieu is much more interesting than a straightforward story about an aspiring indie director could ever be. More importantly, the technique penetrates deeper into the heart of its subject: the insecurities and travails of the unestablished artist.

“This is a strange and off-putting movie, but it’s a movie — and one that some lucky weirdos are likely to watch many times.”–John DeFore, The Hollywood Reporter (contemporaneous)

HOME VIDEO INFO: At this time, She’s Allergic to Cats is only available for video-on-demand purchase or rental (buy or rent on demand

). We’ll let you know if that changes.