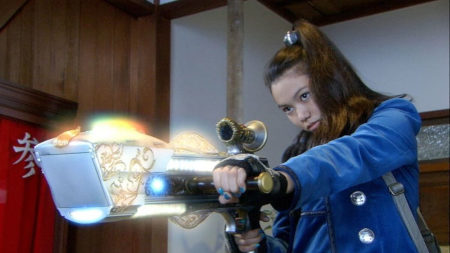 COMMENTS: In 2011, Shunichiro Miki released a short trailer for what appeared to be a sequel to the surreal cult film Funky Forest. In it, a cute Japanese girl points a baroque carbine at the screen; after much buildup as the machine warms up, it releases a dribble of jizz from a tiny penis hidden in a compartment inside the gun. Knowledgeable viewers recognized these scenes as expansion of Miki’s effects-based bits from Funky Forest; random viewers who somehow encountered the teaser in their YouTube feeds were nonplussed, intrigued, and/or weirded-out. The teaser was simultaneously dirty, hilarious, and inexplicably strange, and in certain disreputable corners of the Internet, anticipation ran high for the movie. Funky fans eagerly awaited Warped‘s imminent release…. and waited…. and waited… and waited for ten years, with no additional news forthcoming. The Warped Forest seemed to have disappeared, like a wispy wet dream.

A decade later, The Warped Forest finally shows up on Blu-ray—and it has been well worth the wait. The movie is every bit as warped as the trailer promised. Most Funky Forest viewers feel that Miki’s segments were that film’s highlights, a fact reinforced by the popularity of the still from his “Wanna go for a drink?”—you know, the one with the schoolgirl hooked by her navel to a monitor housing a mysterious orifice, operated by a man in short pants and a bow tie assisted by a mutant Big Bird. Although Funky Forest was a true collaboration, if fans had been polled as to which of its three directors should make a followup in the same style, my suspicion is that Miki would have won in a landslide.

Miki’s work is unique due to his practical effects, realistic-looking monstrosities that are partly organic, often erotic, and—no matter how grotesque—always more amusing than frightening. Beyond the trailer’s sperm-rifle, The Warped Forest provides a cornucopia of such inventions: green and yellow fruits that come in multiple varieties, sometimes bearing one nipple-like bulb and sometimes two, sometimes with an orifice. Branches grow from the breasts of nude dryads, and ripening fruit hangs between their legs. A fuzzy creature sucks human nipples, stretching the skin several inches away from the chest. A shuffling pink monster is filled with amniotic sacs that contain furry hats. Besides all of this prop-based madness, there’s the fact some of the Forest’s inhabitants are tiny, only a foot tall (illusions accomplished via a combination of split screen, green screen, and meticulously miniaturized sets). There is a minor amount of CGI used for the monoliths (which also come in various flavors), but for the most part, the effects are practical: real things made out of silicone and rubber and fur, tangible items inhabiting this world’s uncanny reality.

Miki plops the viewer into The Warped Forest with no preparation, and things get strange fast. What is the triangular monolith floating above the forest like a moon? Why do The Warped Forest‘s youngsters pull nuts from their navels? What is the function of the large green pods seen in everyone’s homes? For what purpose does one woman collect river water in a beaker? For the patient viewer, all of these questions will be answered: there is a rigorous dream logic to every element. The Warped Forest is a self-contained universe with its own consistent ecology, economy, and sociology. There are three trios of main characters, all of whom are also seen in the black and white prologue set in the real world: three middle aged men, three young men, and three sisters of various ages. Although in the real world many are strangers to each other, in the Forest they have their own sets of relationships, including unrequited crushes, infidelities, and blackmail schemes. They are united by their desires—within what we viewers perceive as the “dream world,” mind you—to improve their lives and escape by manipulating their dreams. Inside the colorful world of the Forest, they dream happy dreams in black and white, implying, in a perverse inversion of the Wizard of Oz, that our “real world” is a wish-fulfillment fantasy of the Forest’s inhabitants. As befits the film’s inherently comic nature, everyone gets a happy ending.

Compared to Funky Forest, The Warped Forest is more unified and cohesive. Rather than a series of unconnected sketches, it’s a genuine narrative—if one that takes some work to sort out, and one that leaves a few unanswered questions. It is, on balance, a better overall work than Funky Forest. In the supplemental material included on the Blu-ray, Miki explains that the film never saw a general release for several reasons. Firstly, he had some mental health issues soon after the film was completed that interfered with his ability to promote it. Secondly, the film was completely noncommercial, even by Japanese standards (which tend to be more forgiving towards the weird and grotesque). And thirdly, after completing the film, working entirely with his own money and beholden to no producers or financiers, he was satisfied simply to have brought the visions inside his head to fruition. He had little motivation to do the grunt work necessary to bring it to the wider world. That task was left to others, who recognized the work’s cult potential (even if only attached as a rider to a Funky Forest release) and tracked the film and its creator down. Miki appears genuinely grateful that there is now a small (and hopefully growing), appreciative audience for his labor of love. We should be even more grateful to him for gifting the world with this unique achievement in unreality. It’s a shame that circumstance and temperament make it unlikely that this director will ever make another feature film, but the fact that Miki is happy with his Warped Forest should make us happy, too.

“…instead of the out and out surreality of the low-key alien encounter fantasy ‘The Funky Forest,’ Miki goes for domestic comic situations that are just a little bit bizarre and often bittersweet.”–Charles Webb, MTV (festival screening)

“…a truly brilliant realization of a completely bizarre world… The Warped Forest is a comedy at heart, so it’s easy to just laugh it off when things get really weird….  At only 82 minutes, its short enough that the weirdness doesn’t overstay its welcome and long enough to feel like there never needs to be another one.”–Alec Kubas-Meyer, Flixist (festival screening)

Short Cuts! – The Warped Forest – The programmer for NYC’s Japan Film Society describes the film in a unique video promo

The Warped Forest is only available on a dual release with Funky Forest: The First Contact (see that review for details of the Funky Forest review, “home video info” section). In the UK and Europe, the set was released in a region-free edition by Third Window Films (buy). It should play fine on most North American machines. Although the disc begins with an apology for the poor video quality of some of the supplements, the feature itself looks and sounds pristine. Extras include a short introduction from Shunichiro Miki, a 20-minute interview from the same personage, the trailer, a behind-the-scenes/making of featurette, and “Wonderful Dwellers of Funky Forest,” another featurette devoted entirely to Miki’s creations from the first movie. Miki also supplies a commentary track which explains every aspect of the film in detail, revealing Warped secrets which would be difficult, if not impossible, to divine otherwise.

In the U.S. a slightly different limited edition set (which sold out quickly) came courtesy of Error 4444. If you can find an (expensive) used copy of that release, you’ll get all the features on the Third Window disk plus new artwork, two booklets, a collectible “art card,” stickers, and a “mystery disc” (spoiler: it’s the Funky Forest soundtrack, which is highly sought after in some quarters).

The Warped Forest is not currently available for streaming in the U.S., but can be rented via Vimeo in the U.K. (and possibly other territories).