“The world of the heterosexual is a sick and boring life.”–Aunt Ida, Female Trouble

PLOT:  Baltimore rebel Dawn Davenport runs away from home, gets knocked up by a rapist, and turns to a life of crime to help pay for the daughter she hates. After a brief and disastrous marriage, Dawn is scarred for life after her ex-husband’s Aunt Ida throws acid in her face. Transformed into a freak celebrity by a salon-owning couple, Dawn embarks upon a murder spree before an inevitable trip to the electric chair. 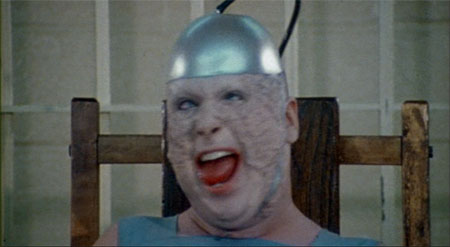 INDELIBLE IMAGE: Dawn jumping up and down on a trampoline, wearing a mohawk and a sparkly pantsuit, at her big performance art showcase.

WHAT MAKES IT WEIRD: An expressionistic nightmare set in the hell of East Coast suburbia highlighting the rise and fall of a 300 pound transvestite mass murderer, Female Trouble reaches its first climax of lunacy when Dawn chops off Aunt Ida’s hand, locks her up in an oversized birdcage, and goes Joan Crawford on her daughter for joining the Hare Krishnas. A second bouncing-off-the-wall climax follows when Dawn murders audience members as performance art before going down in a blaze-of-glory finale that could compete with Cody Jarrett blowing himself up or Tony Montana rat-a-tat-tatting away after being riddled with bullets. Accompanying all that is a beauty myth from the bowels of a white trash hell that would send Naomi Wolf screaming for sanctuary. Female Trouble is even more subversive than Pink Flamingos.

COMMENTS: On the surface, Female Trouble may appear to be an anarchic vision of a world separated from normal society, but it’s a brutally authentic slice of Americana that is as unflinching and nonjudgmental as the prose of Flannery O’Connor or Hubert Selby, Jr.  Everyone is equally implicated; suburbanites can be just as given to avarice, just as heartless, just as guided by hate as the billionaire down the street. Although the portrait of Dawn Davenport is an undeniably indigenous one, Waters’ iconoclastic iconography is ripped from the pages of Jean Genet. It is the aesthetics of crime, filtered through Waters’ focus on piss, vomit, semen, puke, and stained mattresses that tellingly offends. Mass murder? Acceptable, as long as you’re a sharp dresser. Skid marks on a pair of Haines? Now, you’ve crossed boundaries. However, as Waters’ astutely wrote in his memoir “Shock Value”, “to understand bad taste one must have very good taste.” Waters is as shrewd an artist as Andy Warhol. His list of influences range from Busby Berkeley to Kenneth Anger, from Doris Wishman and Russ Meyer to Jean Genet, from Herschell Gordon Lewis to Francois Truffaut. His reflexes instinctively take in culture we are prone to flippantly dismiss. If, like Luis Buñuel, Waters has lived long enough to see himself become something of an icon, it is because he is just so goddamned good at what he does that his celluloid iconoclasm has forged a Baltimore altar in his name. Waters is so honest he reveals himself as among the most moralistic of filmmakers.

Probably Water’s most seamlessly written film, Female Trouble benefits from a tableaux of Tod Browning-like virtuoso performances: Divine as Dawn Davenport, Edith Massey as the obsessively perverse Aunt Ida, and Mink Stole as “retarded” Taffy. David Lochary and Mary Vivian Pearce, as the Dashers, leave a trail of slime for the droll cast to follow. Massey and Stole almost steal the film, which is no simple accomplishment with diva Divine personifying a transvestite Charles Foster Kane rising from out of the armpit of middle-class Baltimore.

The iris of Female Trouble opens on a Baltimore high school, introducing us to high school trash tramp Dawn Davenport. Dawn’s unbridled rage begins when she’s denied a pair of “cha-cha” heels for Christmas. Much of her suffering is sex-related. She is told to “go f— herself” by the father of her illegitimate daughter, and since she played both the father (out of drag) and the mother (in drag), that’s exactly what she did. Next, hippy hubby Gator penetrates her with a pair of pliers.

With all this sex and crime, Dawn has nowhere to go but up, evolving into a camp caricature of operatic heights, with the trampoline serving as her hymnal. Dawn is egged on to new heights of crime by the Dashers, catalysts who, as asexual business owners only brave enough for voyeurism, are the legitimate antagonists. In Pink Flamingos, Edith Massey’s Egg Lady imprinted herself on our cult radar. Here, Massey’s Aunt Ida becomes an overloaded soft-boiled egg, squeezed (barely) into latex S&M attire. It’s no wonder that bad seed and eternal victim Taffy bonds with Ida: “If you get tired of being a Hare Krishna, you can come live with me and be a lesbian,” Ida says from the birdcage, waving her hook.

Dawn has her own lament for Taffy: “I’ve done everything a mother can do,” she practically sings. “I’ve locked her in her room, I’ve beat her with the car aerial. Nothing changes her. It’s hard being a loving mother.” Mildred Pierce never had it so rough, which leaves Dawn with no option but to transform into Mommie Dearest herself, performing a post-natal abortion.

Comprised of both Divine and Glenn (Glenn Milstead, the man behind the drag persona), Dawn Davenport is the best of both worlds, and both sexes. Female Trouble explodes in a “show must go on” mass murder finale, with Dawn replacing James Cagney in the electric chair. It takes finding the Cagney inside of her to slaughter an audience. It works.

G. Smalley adds: Female Trouble marks a tremendous step forward from Pink Flamingos. In Flamingos Waters used his shock technique merely to draw eyeballs, figuring out how far he could go without being arrested or driven into exile. Here, he’s more comfortable with his success, and not so desperate to draw an audience. That means he can focus more on his satire of the middle class, and his wit is able to shine through, resulting in a film that is more legitimately and purposefully shocking. In typically gross Waters fashion we get psuedo-rape, child abuse, absurd makeup, a woman imprisoned in a birdcage, beehive hairdos, mainlining eyeliner, Divine as a go-go dancer, implied pedophilia, puke, murder, and Edith Massey’s saggy naked breasts, all badly acted, edited and photographed—by design. Waters holds up a distorted lens to the stylistic and moral ugliness of the 1970s and creates a uniquely nightmarish world. He playfully inverts the sacred values of the American bourgeoisie: heterosexuality is perversion, crime is beauty, fat is sexy. Even the wallpaper in Female Trouble makes a satirical statement. This is the apex of Waters’ trash aesthetic, the highest point on the dungheap, a peak from which we can look out and survey the junkyard of America, circa 1974.

“Where do these people come from? Where do they go when the sun goes down? Isn’t there a law or something? This compost heap is even dedicated to a member of the Charles Manson gang!”–Rex Reed (contemporaneous)

“…regional camp of very limited appeal, a movie that celebrates tackiness in a way that was revolutionary and sometimes very funny in the sixties when Andy Warhol and Paul Morrissey did it.”–uncredited review, The New York Times (contemporaneous)

– The screenplay, along with bonus scripts for Hairspray and Multiple Maniacs

– A serious academic consideration of the film

DVD INFO: Female Trouble was released on DVD by New Line Features in 2005, with a commentary track from Waters (buy

). The same edition is available as part of a couple of different collections: on a double-feature disc with Pink Flamingos (buy

). Unfortunately, all of these releases are out-of-print and a bit pricey.

Female Trouble‘s presence on home video isn’t what it should be: partisans of the Blu-ray format are totally out of luck. But hopefully, with Multiple Maniacs receiving the Criterion Collection treatment in 2017, all of Waters’ films will soon be re-released in superior versions. Fortunately, the movie can be seen, and even downloaded, cheaply on video-on-demand (rent or buy on-demand