DIRECTED BY: BC Fourteen

PLOT: 2000 years in the future, the alien Illuminati have taken over Earth, and the key to defeating them lies in the DNA of an imprisoned sociopathic clown super-criminal. 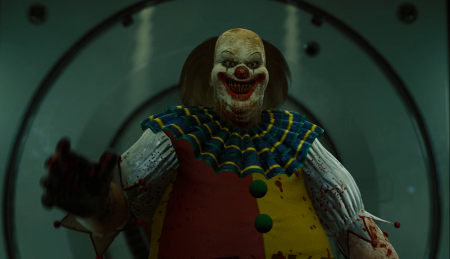 COMMENTS: Tickles the Clown is notable simply because, by all rational criteria, it shouldn’t exist. A spoofy science fiction saga mocking conspiracy theories done in the style of an extremely cheap video game, it appears to come solely from the obsessive mind of one “B.C. Fourteen,” a prolific (111 writing credits) director/screenwriter who also produces work under the names “B.C. Furtney” and “Christopher Maitland.” It’s the latest installment in a four-movie-and-counting series that includes Bigfoot vs. the Illuminati, Trump vs the Illuminati, and Bigfoot vs Megalodon.

Besides the unaccountable fact that there were three previous movies in the series, two things stand out about Tickles. The first is the animation, which appears to use some video game engine modeling technology like Unreal Engine together with a stock library of motion captures. It’s clearly not hand animated; characters’ faces never change expression (for that reason, several of them are almost always depicted in helmeted spacesuits), and backgrounds are completely static. In place of expressive movements, characters sway slightly or gesticulate at random, like video game avatars awaiting entry into conversation with a player. The effect is slightly uncanny, but, at feature length, mostly tedious. One of the movie’s biggest shocks come in the credits, when you discover it took a team of eleven individuals to create this animation.

The second notable feature is the movie’s insane world-building (much of which we gather from the explanation on the back of the DVD, along with a lengthy exposition drop or two). The series is set two millennia in the future, and the Illuminati antagonists are stereotypical “grey” aliens led by a clone of Aleister Crowley, who is building some kind of Death Star and also has black magick rituals up his sleeve. Meanwhile, Big Foot—a jive-talkin’ Big Foot, no less—has joined the Rebel Alliance; a conversation with a werewolf who appears on his spaceship’s viewscreen divulges some backstory that is likely familiar to longtime viewers of the series (aw, who am I kidding?)

As for the movie… it’s mostly dull and talky, but every now and then it sparkles with some demented absurdity. The main plot has heroine Princess Kali repeatedly returning to criminal mastermind Tickles’ maximum security cell to try to convince or bribe him into giving up a blood sample (for ludicrously contrived reasons, they can’t get the genetic markers they need if the blood is taken involuntarily). Thus, most of the movie is just a drawn-out conversation between Kali and the recalcitrant-but-horny Tickles, who taunts her with his super-genius insights into her character and background (and tries to get her to show him her boobs). In other words, it’s a Silence of the Lambs rip-off plot in a Star Wars rip-off setting. But those odd touches! It starts off with a quote from Nietzsche, which is not a promising opening for an indie comedy. Every now and then, a bit of live-action stock footage—a mushroom cloud, a cup of tea, an elephant penis (!)—appears to punctuate the script’s point. There’s the relative star power of Bill Oberst, Jr., who injects a surprising malevolent life force into the perpetually grinning Tickles, laughing maniacally and generally playing the role like a potty-mouthed Saturday morning cartoon villain hopped up on too much sugary cereal. Big Foot is cringily voiced as an African American (he even says “word!” at one point). There are numerous plot holes, including the fact that Tickles’ big escape from a maximum security galactic jail is completely unexplained in-movie (the box cover clarifies the situation, albeit with a typo, although to be fair it also describes a completely different plot than the one in the movie).

Tickles the Clown is intended as a comedy, although it’s not very funny. It often plays as a comedy of errors, though one not funny enough for the so-bad-it’s-good crowd. By all accounts, it’s not any better or worse than the previous three entries in the series. Even as cheaply produced as these movies are, given the spotty distribution—Tickles is only available on DVD, one of the previous three movies is on Amazon Prime, but not the rest— it’s hard to believe they are making enough money to justify hiring Bill Oberst for voiceover.  Forget the question of whether the psychopathic clown and the alien Aleister Crowley clone will team up to defeat Big Foot and the generic space rebels, the big mystery posed by the Illuminati series is: how are these obscure movies continuing to get made, in the face of the world’s utter indifference?

“The series is pretty wild for the most part but what could be something very fun and memorable has been a tough chore to finish…  It’s one of the most difficult films [in the series] to watch and I was not a fan. Skip it.”–“Blacktooth,” Horror Society (contemporaneous)

PLOT: A man ties up his methamphetamine-addicted friend in a cabin in hopes he will kick his drug habit, but strange things start to happen.

WHY IT SHOULD MAKE THE LIST: In this tense micro-budget thriller, a young man tries to bring his friend back to reality, only to find that “reality” is not just open to interpretation, but malleable and ever-changing. In fact, the pair’s reality might not even be their own. A genre bender and a puzzler all in one film, this indie thriller combines horror, mystery, drama, and psychological suspense elements with a novel premise and twist and turns to deliver a uniquely weird viewing experience.

COMMENTS: In spite of some worn clichés—mysterious found footage, missing researchers, and a mystic medicine cabin obligatorily set on an Indian reservation—with Resolution, independent writer/director Justin Benson brings us a breath of fresh air. The film is technically adept on its small budget, and presents a real genre-bender of a plot. Resolution builds slowly as a crime drama, becomes psychological suspense, then morphs into a puzzler riddled with paradoxes. It releases in a brief climax of occult horror.

In the story, yuppie Michael (Peter Cilella) travels to a remote squatters’ shack, where his addict friend Chris (Vinny Curran), bristling with firearms and contraband, has holed up, resolved to kill himself with drugs. Michael restrains Chris, and forces him to withdraw “cold-turkey” over the course of a week.

A progression of weirdos make the scene. Chris’s low-life cohorts (Kurt David Anderson and Kyler Meacham) drop in, demanding drugs. A tightly-wired Native American property owner (Zahn McClarnon) and his menacing gang show up to evict the occupants. A scheming real estate developer (Josh Higgins) creeps in, mistaking Michael and Chris for the deed-holders, and a doomsday religious cult is engaging in shenanigans a little too nearby for comfort.

Michael strives to maintain control over the situation to buy enough time to get Chris straightened out, and back to civilization and rehab. Despite the threat posed by oddball interlopers, the real tension is yet to come.

Someone…or some THING is watching and recording everything Michael and Chris do. But how? The surveillance indicates a presence that looms closer and closer, yet Michael can’t detect the observer.

Looking for clues, Micheal discovers strange footage shot by a missing anthropology team, then locates a laconic neighbor, Bryon (Bill Oberst Jr.), with an uncomfortably unorthodox existential philosophy. From here the story plunges into perplexing paradoxes. Chris’s sleazy drug buddies and the landowner converge for a showdown. Mind-bending events knock Mike and Chris away from objective reality and any sense of control over their destinies.

Resolution is talky, but intriguing. The long-winded plot is better suited for an hour short. Aside from establishing an initial setting and circumstances, the first half of the film doesn’t bear vital relation to the engaging concepts of the second. It’s still pretty good. Unsettling developments keep us watching. Plot twists reveal a honeycomb of passages down which to venture. Rather than choose one of them and proceed, the filmmakers offer a twisted experience based on the fact that these alternate routes exist.

Part of the fun of Resolution is thinking about the various possibilities and what they mean. In our minds, we pursue them, trying to predict the outcome, but just when we think we know what’s going to happen, Resolution throws us a new twist. Throughout it all ripples a nerve-jarring undercurrent of menace, indeterminate and incipient. Mike and Chris’s safe return to the outside world is increasingly unfeasible.

Subtle cinematic artistry reinforces the exposition. In the scene in which Michael is conversing with Byron, Byron discusses his views about narrative and story. As he explains his views, he holds a mirror. At first, the mirror is angled so that Micheal’s reflection blends with Byron’s face. The effect is to project Byron and Micheal as melded together, depicting a dual entity. But Michael cannot see it. Only we can see it.

Resolution was filmed in a half-completed lodge under construction, illuminated by hook lamps, and without background music. Intimate camerawork increases a sense of realism, almost like seeing a documentary. The technique is effective because Resolution turns out to be all about deconstruction and the plastic nature of reality. By the time we realize this, we’ve accepted the actuality of what’s transpired, only to have the drop sheet yanked out from under our feet.