PLOT: Justin uses a spell book to summon the infernal spirit Lo to help him see his dead girlfriend once again, but the demon uses every trick possible to avoid fulfilling the command. 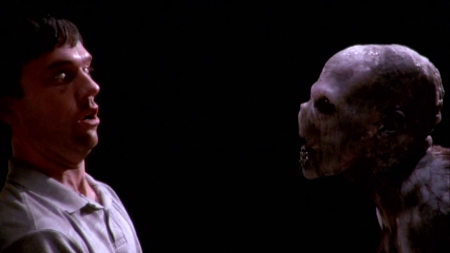 COMMENTS: There have been many movies about demonic possession, but few about demonic summoning… and no other, that I can think of, where almost the entire movie plays out from inside the safety of a pentagram. (Lo‘s closest competition for time spent inside a thaumaturgic circle might be Viy.) For the first five minutes we watch Justin, in a pitch black room lit solely by candles, painstakingly (if clumsily) construct this magical barrier, following the instructions etched on the yellowed parchment of an ancient grimoire, christening the ritual with his own blood. He then speaks the magic incantation and successfully summons the demon Lo, a pathetic yet powerful devil with a partly exposed brain and useless crushed legs which force him to painfully drag himself from out of the inky blackness towards his summoner, angry and defiant but unable to cross the enchanted barrier and devour Justin’s soul. The spell Justin cast compels a boon from this creature. You see, he saw a demon drag his girlfriend off to Hell, and now he wants her back—or at least to see her one last time. And Lo must meet Justin’s demand—although, in classic Mephistophelian fashion, the spirit isn’t above resorting to temptations, tricks, half-truths, and twisting Justin’s requests in any way he can.

The way Lo achieves its aesthetic aims on a minimal budget is nothing less than magical. Darkness is an ally; the set is a essentially black box, props are minimal, and only the demon costumes consume a significant amount of dollars. The flashbacks that supply the backstory are told through reenactments on a stage Lo conjures in Justin’s darkened apartment. There are red curtains, applause, visible stagehands, and comedy and tragedy masks that react to the proceedings. For additional color, Lo also summons a fuzzy green demon rat, a lizard-headed Nazi demon, a pair of damned silhouettes who press against a saran wrap wall as they describe the torments of Hell, and a couple of (mediocre, but welcome) musical numbers.

The story advances almost entirely through the antagonistic dialogues of the demon and his summoner. Chances are good that you will guess the twist ending early on; but it’s such a perfect construct that it doesn’t detract from the poignancy of the reveal. Who can’t relate to falling in love with the wrong person, a love that might be mutual and true, but which fate and circumstance dictates must be temporary? And who can’t relate to the compulsion to understand the true reasons behind a disappearance, however horrible the answer might be? As breakup movies go, Lo supplies a real, mythic catharsis.

With all that it has going for it, I would love to nominate Lo for our supplemental Apocryphally Weird list. Is it ingenious? Definitely. Engaging? Undoubtedly. Passionate? Sincerely. Recommended? You know it. Weird? Ah, here is where the favorable adjectives falter. Lo is well off the beaten path of the average filmgoer—the one who doesn’t frequent this site. What we see in Lo, though, isn’t so much weird as offbeat, rare, counter-Hollywood: unusual in its approach, by necessity, but not so far out-there that it makes us question our notions of reality, or if what a film can and should be. So, despite the fact that we give Lo a high rating, we won’t be adding it to our List. That doesn’t mean we’re giving you a pass to skip it.

“…a peculiar and experimental horror film about love gained, love lost, and the demons that can stand in your way. ‘Lo’ is an odd twist on Faust, and an entertaining indie film that impresses with its bare essential filmmaking.”–Felix Vaquez, Cinema Crazed (DVD)

(This movie was nominated for review by Kat, who argued “I’m a little surprised not to see Travis Betz’s Lo (2009) on the suggestion list. Like Ink, its imitations and inspirations are pretty obvious– but I personally think it outstrips Ink in a few key areas, never over-stepping its budget. I found it a little more bizarre, too, in the way it takes a simple trope of a premise and reels continually between drama and dark comedy.” Suggest a weird movie of your own here.)