PLOT: A large group of teenagers gather together at a restaurant for an assembly to determine their future. 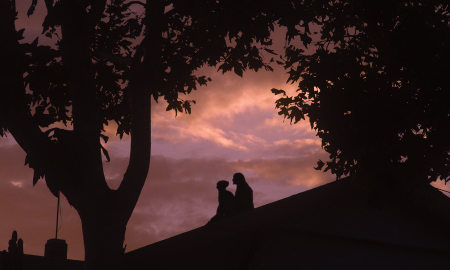 WHY IT MIGHT JOIN THE APOCRYPHA: Ham on Rye is essentially a “coming of age” drama, but the fact that it never reveals what exactly is going on makes this uncomfortable viewing for many, and deliciously odd for those who have a stomach for ambiguity.

COMMENTS: Tyler Taormina kicks off Ham on Rye with a simple visual hook: a cigarette lighter refusing to ignite. For minutes. Until it does, and the tension is released as it lights up a firework. Throughout, there are shots of birthday party attendees waiting for the release. The sun shines brightly, the gifts are stacked high, and we wait, and wait, and wait. While we do get the satisfying resolve of the party pyrotechnics, in the narrative itself there is no resolution to speak of; at least, not for most of the characters—and certainly not for us.

Ham on Rye‘s first half shows us a little bit about everyone as they head to “Monty’s,” a diner which we are informed “recently painted the hand on their sign green.” As the teenagers, all dressed to the nines (in a sartorially inept high school kind of way), enter the restaurant, they each in turn press their hand against the painted hand on the window, and brace themselves for their fate. After a meal, they awkwardly dance along to songs playing on the jukebox. Then, when “Tonight I’m Gonna Fall in Love Again” cues up, they immediately snap to attention and a bizarre ritual begins. Some are lucky, partner up, and then disappear from the film; the rest are left to an ambiguous doom.

Taormina plays the premise straight, and only reveals modest details through snatches of conversations. Something important is going to happen to these young adults: after the tension-lighter introduction there follows an extensive montage of the youths getting dressed and ready, followed by dropped hints about impending risk and efforts by each group to pump themselves up. When a father sees off his boy in a carpool heading to Monty’s, he begins all gratitude and reminiscence, but as the car pulls away, he incongruously shouts after it, “DON’T MESS IT UP! DON’T MESS IT UP!” until he’s out of earshot. What shouldn’t be “messed up”? It is never made entirely clear.

Ham on Rye‘s second half follows the leftovers from the ritual. Night has fallen on the city, and aimless depression has sunken in. One kid, who works at Monty’s, is reassured, as it were, by a friend, “Look, man, it sucks, right? And you can let it suck… or not let it suck. Or something.” We see the world they’re in no differently. Humdrum suburban life. Backyard barbecues. Drinking. Games of Uno. But the lucky ones have disappeared. So are they living a fate worse than death? Taormina refuses to tell us. He discourages us from even trying to understand. At a post-Monty’s party, one of the lads who didn’t get lucky remarks (about something, also left unspecificied), “You can’t see it. But if you get a really good microscope and look really hard… You still can’t see it.” This movie will confound anyone seeking narrative clarity, but its absence is exactly what makes Ham on Rye such an appetizing enigma.

“At first glance, Tyler Taormina’s ‘Ham on Rye’ plays like ‘Dazed and Confused’ with more poetry and less connective tissue, or ‘Eighth Grade’ with benevolence in place of cruelty. Then things get weird…  a work of gentle, genuine American surrealism…”–Ty Burr, The Boston Globe (contemporaneous)

(This movie was nominated for review by Russ Joyner, who called it “an utterly unique film — come for the American Graffiti-through-a-Lynchian-lens aesthetic, stay for the surrealistic soul-crushing aftermath of snuffed out dreams — but with the faintest whiff of optimism.” Suggest a weird movie of your own here.)