PLOT: A group of four people act as stand-ins for deceased loved ones to help families with the grieving process. 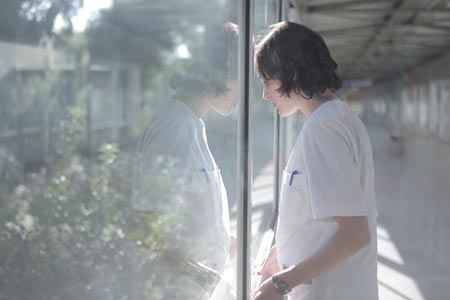 WHY IT WON’T MAKE THE LIST: Alps feels like a faint echo of director Lanthimos‘ surprise (and Certified Weird) hit debut, Dogtooth. It has weaknesses typical of a sophomore effort: stylistically, it doesn’t distinguish itself from its predecessor, and conceptually it seems second tier, like an idea that was passed over and saved for later.

COMMENTS: There is a plot to Alps, but it’s secondary. This movie is more of a mood. The mood is muted anguish. If you were to watch Alps without reading the one-sentence synopsis, you would go through the early stages of the film baffled by the odd and strained relationships of the characters to each other; even armed with knowledge of the premise, there are moments in the story when you will question what’s “reality” and what’s an act. The slow-developing narrative concerns people who serve as emotional prostitutes for the bereaved, and (predictably) the strange and intense job (or hobby, since the actors’ motivations are never made clear) eventually takes a psychic toll on the chief protagonist. The story doesn’t develop in a particularly interesting way, however; Lanthimos’ interest is more in creating an alienated mise-en-scene than in telling a story about the emotional toll of being a stand-in for deceased loved ones. Alps features flat-affect characters who respond to tragedy with mundane conversation about coffee mugs and lamp taxonomies, awkward hugs and gawky lovemaking, framing that’s deliberately off, with chopped off heads and characters speaking from off-screen, out of focus backgrounds, bilious lighting, and other unnerving effects that, piled on top of each other one after another, create a growing sense of existential nausea. Almost all conversations are clipped and nearly emotionless, but often interrupted by odd behavior—as when the nurse tries to play tennis with a nearly comatose patient or the gymnast suddenly strips topless and stretches her leg above her head while talking to her coach. Aggeliki Papoulia alone of the cast allowed to show any real emotion, and then only pain and desperate despair at the very end. Every character has a perpetual look of buried sadness, and the surrogate loved ones, who perform their substitutions like amateur robots, can hardly supply any comfort to the bereaved when they have no warmth or passion in their own lives. Alps presents us with a depressing, autistic world, where the possibility of a human connection is a bitter joke. But… how does all this social anomie among the living connect back to the movie’s ostensible theme of grief? Is this movie about the way the living remember the dead, or is it about the living dead? In Dogtooth, the isolated children had a reason for acting relentlessly odd, and that movie had a metaphorical conceit that gave it form. Alps radiates a shapeless pessimism that is especially nasty because it has no cause or focus. Where Dogtooth was like a smack in the molar with a brick, Alps is like a throbbing toothache that won’t go away.

If you want to know what it’s like to feel suicidal in Eastern Europe today, try watching a triple feature of the New Weird Greek canon: start with Dogtooth, follow up with Attenberg (starring Labed as an alienated, asexual woman with a dying dad), and use this one as the final nail in the coffin.

“Lanthimos delivers another heady dose of weirdness. Loopier than a frog sandwich but rather wonderful.”–Simon Crook, Empire (contemporaneous)