CREATED BY: Jeffrey Addiss, Will Matthews

PLOT: For over 1,000 trine the Skeksis have ruled over Thra, and its Crystal of Truth, corrupting them both in their quest for immortality; Aughra, the guardian and incarnation of Thra’s spirit, emerges from a cosmic slumber when she hears the planet crying out, and goes about her way to save her world. 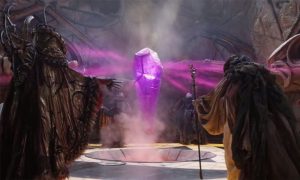 WHY IT WON’T MAKE THE LIST: Though Thra is teeming with bizarre creatures, wondrous magic, and sinister devices, this is an epic fantasy, and we expect those sorts of things. That said, the creativity and scope here are nothing short of monumental.

COMMENTS: Pity the poor Skeksis: all they ever wanted was to live forever. That’s about as much empathy as I can muster for them having watched (decades ago) the original Dark Crystal and (days ago) the Netflix series, Dark Crystal: the Age of Resistance. Thinking myself on a deadline that proved to be non-existent, I binged all ten hours over the course of a day without interruption. That alone, I feel, speaks to its quality. It appears that the prequel is at least partly based on print material made since the original movie. Still, it was fresh to me, but not entirely unfamiliar. Working with puppets, as Henson & Co. did for the first go-around, The Age of Resistance maintains the timeless feel of that movie I watched over and over as a child.

Cramming ten hours of epic fantasy plot into one paragraph is beyond my ability; suffice it to say, The Age of Resistance brings the modern viewer as much of the Skeksis, Aughra, and Gelflings as one could ever want. After opening narration hinting at the Skeksis’ origins and explaining the socio-ecological history of the planet Thra, it dives into some (very well executed) fantasy character-introduction, follows that up with some (very well executed) quests and side stories, before finishing with a (very well executed) climax and final confrontation between the Gelfling heroes and the Skeksis overlords. Of course, how “final” the confrontation is, to anyone familiar with the broader story, is doubtful; judging from the show’s byline and the beginning of The Dark Crystal movie, this series finishes at what I shall dub “peak Gelfling”. The story’s coda sets things up for the staggeringly dark chapter in Thra’s history that is (hopefully) doubtless to come.

But the show! My word, I had forgotten how impressive things could be when the Henson name is slapped thereupon. Thra’s ecosystem bubbles over (sometimes literally) with all manner of exotic creatures: woodland faeries that fly and spin along air currents, deadly carnivorous plant tendrils called “gobblers”, paper-eating library imps, and of course the landstriders and “fizzgigs“. The humanoid characters fill out the perquisites for fantasy adventuring yarns: the troubled soldier, the bookish princess, the knight-errant with humble origins. Obviously there are technical limits to emoting when we’re talking puppets (particularly, it seems, when talking Gelfling puppets), but the combination of voice acting (Mark Hamill and Simon Pegg are a real treat) and the puppeteers—each responsible for their own character (my apologies to those under-credited virtuosos)—made the whole world, at least by a few hours in, seem real, in its own special way.

My main criticism with a lot of fantasy I’ve seen and read (including that which I’ve thoroughly enjoyed) is the conflict seems to boil down to “infinite skill” (the good guys) versus “infinite resources” (the bad guys). Dark Crystal: the Age of Resistance does not suffer from this distillation. The Skeksis are pure sociopathic evil doused in cunning (they’ve been running the show for a millennia); the Gelfling (and their various allies) have passion, surely, and some have skill. But it never comes across as a close fight. Indeed, there was a pall over the whole affair as I knew what was coming. The Age of Resistance‘s narrative arc stops before that dark period, so things  end on a hopeful note. But for those in the know, the Gelflings have much more to fear than any “winter” coming; their story is primed for genocide, and you can’t say that about many PG adventure shows.

“…quite simply, one of the all-time great fantasy epics, as well as the masterwork of puppetry most closely aligned with Jim Henson’s humanistic philosophy… Despite being rated TV-PG, ‘Age of Resistance’ never flinches when tackling the harrowing aspects of its subject matter. It is chockfull of nightmarish imagery guaranteed to frighten some young viewers and fascinate many others. Part of what appealed to those who grew up with The Dark Crystal was its sense of danger and conspicuous lack of sentimentality, giving kids the sense that they were embarking on territory more adult than the reassuring fairy tales of Disney.” –Matt Fagerholm, RogerEbert.com (contemporaneous)

With the release of The Witch and It  Follows, 2015 was an exceptional year for the horror genre. The Witch, Robert Egger’s directorial debut  proved to be the more provocative of the two; not surprising, given that Puritan oppression as horror strikes close to home. Even more predictable is the expansive hatred for such an original film by formula horror fans. They’re a tribe of Neanderthals, too obtuse to recognize one of the ballsiest film of the last decade.

The Witch‘s subtitle tells us it’s “A New-England Folktale,” set in the mid-seventeenth century. It opens with family patriarch William (Ralph Ineson) banished from this Puritan paradise for unclear reasons. Like Adam and Eve, William and his wife Katherine (Kate Dickie) are forced to flee to the wilderness, a forest setting that recalls numerous fairy tales. With them are their children, Thomasin (Anya Taylor-Joy), Mercy (Ellie Grainger), Jonas (Lucas Dawson),  Caleb (Harvey Scrimshaw), and the infant Samuel.

Like most evangelical sects, William’s religion practices a type of anti-ritualism (setting them apart from liturgical competitors); but, as we see from his dialogue with Caleb, a ritualistic anti-ritualism ritualism sets in. Caleb is a willing subscriber.

Along with the rituals comes Puritan oppression, and a superstitious anti-superstition soon rears its horrific head. Thomasin, left in charge of Samuel, entertains him with a game of peekaboo, but on the fourth uncovering of her eyes, Samuel has vanished. Did a scarlet witch abduct Samuel? Or, is Thomasin guilty of witchcraft herself? Initially, each family member professes guilt over the disappearance of Samuel, but true to the tenets of Puritanism, the antagonists—or imagined antagonists—take feminine forms.

In sharp contrast, Caleb, the male child, is his father’s candidate for godly martyrdom. The proof is in the pudding when Caleb’s holy innocence is tested, aroused by Thomasin’s cleavage. Taylor-Joy and Scrimshaw lead a cast that gives stunning performance, restoring our faith in acting.

The film is replete with beautifully horrifying imagery, including a blood-spurting black goat and one of the most unnerving finales in recent memory; straight from bowels of a Goya canvas. Eggers’ sense of period detail, as impressive as it is, is topped by his finding the pulse of the Puritan mindset. The eye of his hurricane is Taylor-Joy who, abandoned by God and family, spans a range in a single film that most actors can’t accomplish in an entire body of work.

It Follows is the second feature effort from director David Robert Mitchell, who impressed with his debut film, The Myth of the American Sleepover (2011). Teen Jay (Maika Monroe) has sex in the back seat of her car with current beau. Since the setting is the horror genre, we all know from the much-quoted Scream (1996) that this means certain death. Sort of.

Many commentators have honed in on the sex and death equation and see It Follows as a parable about STDS. Sort of.  Cool and kinetic, It Follows revels in its paradoxes. When Jay’s boy toy copulates with her, he passes on a stalking demon that can take any form. It’s slow but lethal, and the only way to rid oneself of this shape-shifting ogre is to copulate with someone else before it turns you into beached leg of lamb. Sort of. There’s a catch, of course. If your victim doesn’t pass it on, It will return to Follow you.

John Wayne and Howard Hawks were mightily offended by Carl Foreman’s script for High Noon (1952), which depicted a narcissistic community refusing to help their neighbors. In response they made Rio Bravo in 1959, then remade it twice. It Follows has it both ways. To prevent her own demise, Jay has to play the narcissist, but she does so reluctantly, and depends on her community of friends for help (parents are out of the question, as it should be). Mitchell chooses his predators smartly, ranging from a child to a naked old man perched on a roof. He clearly has fun pulling from a bag of personality types, embracing the genre tropes, and playing with them like silly putty. References to Val Lewton and Jacques Tourneur‘s Cat People (1942) abound, along with John Carpenter (including Rich Vreeland’s score) but, like Lewton, Mitchell is not content to merely repeat the past. He’s too progressive for that, and for conservative horror geeks.