Created by Steve Ditko, Doctor Strange was an authentically odd character in the Marvel universe of the 1960s. Aptly, he debuted in the “Strange Tales” comic. The character almost perfectly encapsulated Ditko’s idiosyncratic, surreal pencil work, even more so than his better known co-creation, Spiderman. Complementing Ditko’s art, Stan Lee scripted the character as a hybrid mixture of Jungian archetypes with a theosophist cocktail of Eastern mysticism and Egyptian mythology. When other artists took over Doctor Strange after Ditko’s departure, it never had quite the same texture, and quickly became bland before descending into parody as the good doctor could be found in superhero team-ups with the likes of Hulk and Spiderman (!)

A pulp mystic, the character hardly seemed like a viable nominee for big screen treatment, and when Doctor Strange (2016) was announced as the next Marvel movie, the prospects didn’t look hopeful, considering director Scott Derrickson’s execrable resume.  Surprisingly,  Derrickson and his co-writers went straight to Ditko and Lee’s original source material, delivering an entertainingly psychedelic production, which is helped by actor Benedict Cumberbatch in the title role, Rachel McAdams, the ever reliable Mads Mikkelsen, and Tilda Swinton. 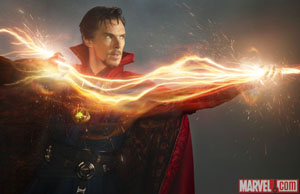 As much as Robert Downey, Jr. embodies Iron Man, Cumberbatch does the same for this surgeon with the Trump-sized ego. However, an accident leaves Doc’s precious surgical hands mutilated, prompting him to seek enlightenment via the Ancient One (Tilda Swinton, filling in for David Carradine), Mordo (Chiwetel Ejiofor) and Wong (Benedict Wong). Before you can say Expecto Patronum, Strange sees the light and transforms into Chandu the Magician heading to the next Hare Krishna meeting. Despite the here-we-go-again St. Paul conversion myth, it plays out much more uniquely, viscerally, and tongue-in-cheek than one might expect.  As Strange perfects his new metaphysical trade, the CGI actually enhances the narrative, as opposed to distracting us from it—and, yes, see it in 3D, because that’s the best route for trippy 60s symbolism. Derrickson and company faithfully recreate and expand upon Ditko’s peculiar brand of surrealism and the havoc they wreak with illusionary imagery from the mirror universe is refreshingly off-kilter.

In a rarity for something churned out by Marvel, the director and team have been given room to play outside of conveyor-belt dictates. The fun they have is contagious, but such a subject can only be as good as its villain. Fortunately, they have one in the outlaw mystic Kaecilius (Mikkelsen) who engages in a phantasmagoric battle with Strange on the streets of New York (aided considerably by Michael Giacchino’s galvanizing score). Mikkelsen’s Kaecilius could very well be his astral, Dark Dimension, bony version of Hannibal Lecter (and shame on those who missed that late series, which rendered the Anthony Hopkins/Jonathan Demme version obsolete), delivering his hocus-pocus dialogue with such aridity, he scares the hell out of you just by speaking. Mikkelsen is cast well (although underused) against Cumberbatch’s in-the-know remote wit. Likewise, McAdams is smartly cast as Strange’s ex-girlfriend who literally assists in his physical and metaphysical healing. The actors, coupled with visuals blatantly inspired by MC Escher, give Doctor Strange an all too uncommon individuality. This is not the Avengers taking turns pounding away at big shiny black, metallic thingamajigs. Rather, the good doctor, with his cloak of levitation, takes his battles to the realm of pop nightmares, which makes the late hint to an inevitable Avengers tie-in all the more disappointing. Is it weird? Nah, but it’s an empyrean burlesque and, for this studio, that is a surprising treat.

Tom McCarthy’s Spotlight (2015) is now playing in select theaters. It opened in half a dozen cities nationwide, was critically well-received, and did brisk business. It was only after that promising start start the studio seemed to have any faith in it, which is unfortunate. It is not only a well-made film, but also an important one. Thankfully, it does not take the attitude of being Important, and commendably refrains from on-the-sleeve melodramatics, which is a rarity in films with potentially explosive themes.

The image of Bing Crosby’s congenial Irish Father O’ Malley has gone the way of the dinosaur. That is apt, because even the velvet-voiced actor behind the collar was reportedly an abusive father (one son wrote a “daddy dearest” tell all; two additional offspring committed suicide). The Church itself was the cause of its own bad press, and most of the world became privy to its dirty laundry when the Boston Globe published a series of articles in 2002 exposing pedophilia in the ranks of Catholic clergy.

Actually, cracks were beginning to show elsewhere before that infamous exposé. A few years prior, the Indianapolis Star ousted sixteen pedophile priests in the ranks of the Lafayette diocese. Still, that does not compare to the Boston Globe revelation of (approximately) 90 priests who were serial pedophile abusers in the diocese of Cardinal Bernard Francis Law. This is the topic of Tom McCarthy’s Spotlight.

When new editor Marty Baron (Liev Schreiber) arrives at the Boston Globe, he inquires about a follow-up to a recent column about a lone pedophile priest. In a meeting with Walter Robinson (Michael Keaton), Baron speculates that this may not be an isolated incident and deserves further investigation. That’s how things happen; like a silent wind blowing with no indication where it came from or where it is going. 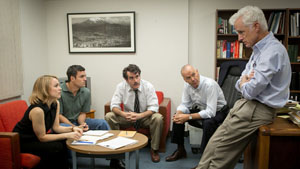 Robinson assembles a crack team, which includes Mike Rezendes (Mark Ruffalo), Sacha Pfeiffer (Rachel McAdams) and Matty Carroll (Brian D’ Arcy James). With barely a journalistic scratch, the number jumps from one pedophile priest to six, then to possibly thirteen. Perhaps the most unnerving scene in the film follows. A disembodied voice, belonging to an insider, calls the “Spotlight” team.

“Do you think thirteen pedophile priests is an accurate number?” the caller is asked. “Oh no,” he answers. “Too high?” “Too low. It’s probably closer to 90.” His reply is so nonchalant, it makes the hairs on the nape of the neck stand on end and gives credence to an attorney’s previous observation: “If it takes a village to raise a child, it also takes a village to abuse one.”

There is no dimly lit John Huston figure or a Deep Throat informant hiding in the shadows of a subterranean parking garage. McCarthy END_OF_DOCUMENT_TOKEN_TO_BE_REPLACED

De Palma, perhaps the most shrewdly experimental mainstream filmmaker of the last half century, is also one of the most polarizing. The conventional critical breakdown of his oeuvre goes: 1968-1972, early, blatantly avant-garde films (Greetings, The Wedding Party, Hi, Mom, Get To Know Your Rabbit) followed by 1973-1974’s narrative experimentations (Sisters, Phantom of the Paradise). 1976-1984: his sell-out to tinsel town (coupled with his Hitchcockian obsessions—Obsession, Dressed To Kill, Blowout, Body Double). 1983-1998: gangster dramas (Scarface, The Untouchables, Carlito’s Way), overlapping with self-parody (1992’s Raising Cain, 1998’s Snake Eyes), and, finally, post-2000 fatigue (Mission To Mars, Black Dahlia).

Such a summary is a slipshod reckoning; gleaning an artist’s body of work through a brisk glance in a catalog, missing his edgy diversity, color, and gradual development.

Whittling down De Palma’s diving board to Hitchcock is also woefully inadequate. When an art critic listed 90 of Picasso’s influences, the artist wrote back: “You forgot Gauguin.” Sergei Eisenstein, Jean-Luc Godard, Andy Warhol, Orson Welles, Michelangleo Antonioni, Dario Argento,  Sam Peckinpah, Francis Ford Coppola, Irvin Kirshner, Martin Scorsese and Robert Flaherty have all informed De Palma’s work and are filtered through his pre-existing sensibilities, which include a background in mathematics and avant-garde narrative. This diversity renders De Palma far more eclectic than any of his predecessors or peers. 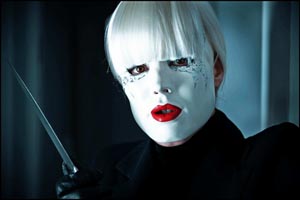 Passion giddily enjoys being a movie for the sake of movies. A few bourgeoisie critics have complained that De Palma is simply stuck on repeat mode, but if you are willing to entertain his inviting disregard for neorealist trends, you may discover a deepening of his art and be transported into a celluloid Canaan.