PLOT: Young Mateo is diagnosed with cancer, much to the maternal delight of his uncommonly protective mother, Libertad. 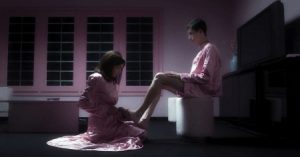 COMMENTS: Nestled between the Venn diagram data sets for “Sledgehammer” and “Soft” lies La Pietà, Eduardo Casanova’s sophomore feature. If you’ll permit the flowery language, as the film’s leads would, there is, verily, a great deal of “nestling” here in general. The title card’s image, the climax’s mise en scene—and regularly throughout, one character is seen in the arms of another, especially young Mateo embraced by his suffocatingly loving mother. Libertad, for ’tis her name, loves her son to a degree so monumental it risks crushing him under the weight.

Within the confines of a sepulchral home wrought of soft-black marble and pink curtains, Mateo lives under the protective wing of the omnipresent Libertad. They dine together, watch television together, and occasionally sleep together. On the occasions they leave the home they (both) attend rehearsals for Libertad’s dance ensemble; later, when it is revealed one or both of them suffers a malady, they (both) spend time at hospital. Libertad is forever fretful her dear boy may wander off if he is not at her heels. Meanwhile, dear boy does often hear the siren’s call Outside That Door; a foray there triggers his downfall into complete dependency.

A parallel story concerns the family of a military official attempting to flee North Korea (the film is set just prior to the passing of Kim Jong-il), adding further to this obvious treatise on dictatorial behavior and the reliance cultivated in the subjected. Mother grills Mateo about the quality of his bowel movement over dinner; she offers to help him bathe, and insists on trimming his toenails (which becomes an unlikely plot point); and, when the lad is weakened by chemotherapy, Libertad finds his helplessness far too alluring. Mateo is vaguely aware of how this behavior is damaging him. As he navigates his world of soft-black stone and pink fabric, he has augurs and guides: his estranged father (who has mommy issues of his own), his therapist (trying to pry apart the symbiotic pair), and Consuelo, a mysterious hospital patient who desires her own freedom.

Nestled in the heavy-handedness (of both the mother and the director) are those subtleties I mentioned. Beneath the situational cringe humor lies a subtler vein of comedy. Libertad’s conversation with a hospital receptionist about pink ribbons for breast cancer is an honest-to-goodness chuckler (“There’s no color for brain cancer?”) Casanova references his debut, Skins, with a brief shot of “Poopie Loops”, whose box features the ass-faced woman. Mateo’s pregnant step mother’s insistence (yes, there is a lot of maternity going on) that she is not smoking when she demonstrably is makes for a bleakly amusing counterpoint to Libertad’s obsessive need for control.

Her control, in turn, reflects the director’s control of his sets, costumes, scenes, and choreography. La Pietà kicks off with a baroque dance number, which ticks along perfectly right until the singer collapses in a fit of helpless tears. But even in his overblown metaphors, Eduardo Casanova softens the edges with chiffony, pastel-pink.

Read our interview with Eduardo Casanova.

Chicly sprawled over a chair or two, film director Eduardo Casanova kindly answered our questions about his latest (and most personal) film, La Pietà [review], with the able assistance of his translator, Marta Calderon. Join 366 as we discover the influences on his visual style, his favorite hometown place to eat (of course),and just how great Giles’ mustache is.

(Keep an eye and ear out for a cameo by Madison Brek, Fantasia Press Relations Representative extraordinaire!)

You can listen to the interview’s raw audio here.

366: ..and I guess that explains itself. My name is Giles Edwards and I am sitting here with Eduardo Casanova, and I managed to see La Pieta in the press screening the other day, and was very pleased with what I saw. So I am hoping to ask just a little about that in the brief time we have.

366: Yes, it’s a partial inspiration for it. I like to be as distinguished-looking as possible.

EC: I am obsessed with the [panalack?]. I really like aesthetics dictatorship regimes, like the Soviet Union and communist dictatorships, where the buildings are all looking the same. I think in the countries that have totalitarian regimes, everything around you is really big and makes you feel that you are small, and… part of something. I remember when walking through Berlin through Karl-Max Avenue, how small I felt walking amongst those buildings.

Giles is back: tell a friend. 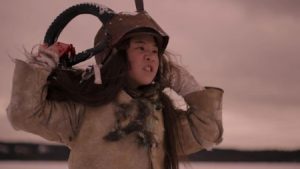 Polaris works more than it doesn’t, and why it doesn’t work for me is hard to pinpoint. Perhaps it is too bright? (But no, that’s an appropriate choice for a film set so far north and with so much snow.) Maybe the ferality of the people is off? (Eh, so long after societal collapse, that makes sense.) That green goo found throughout is a bit “much”? (Again, as a catch-all symbol for Earth’s empoisonment, it is up to the task.) Carthew crafts moments of powerful emotion, genuine wonderment, and striking brutality, making this an interesting choice to kick off our return to “normal”; worthy of another look by a different eye than mine.

There was something about sitting in a darkened theater full of people, witnessing a middle-closeup of an emission on screen, that felt, I dunno—”cosmopolitan.” In one way I was not surprised by the string of erotically-charged (and in a few cases, outright explicit) short films being so up front, but in another way I can’t shake the feeling that the organizer for these various Cavalcades (there are two more to come, so to speak) would be happy to tilt the festival more towards poetical pornography.

But the films: there were nine in total, and while each could suffice with its own writeup, we’re on a byte budget. “Aspirational Slut”, “Pretty Pickle,” and “SOS Extase” all showed sex can be fun and funny, as well as be gen-yoo-ine film films, with “SOS” proving that absurdism, sex, and cinematography fit hand in (leather) glove. The last also wasn’t above some visual word play, giving literal manifestation to the term “leather fetish.” It wasn’t all fun and games, though. “Creature” was proof-in-celluloid that a women-loving-women cinema can be eye-droopingly boring while crushing you underfoot with a melodramatic bombast that, if pushed half a notch further, would have landed squarely in parody. The men-loving-men-eroticism of “Exalted Mars” (featuring that big-screen emission I mentioned) stood neck-and-neck with the yawn-inducement of “Creature”—but at least was more tranquil about it.

Top prize for most unabashed fun (and gayness and sex and &c.) goes END_OF_DOCUMENT_TOKEN_TO_BE_REPLACED

While the film revels in its disorienting nature, filmmaker Mitchell Stafiej and co-leads Travis Cannon and James Watts provide clarity about the inspiration, process, and production of The Diabetic. Traveling all the way from Montréal to a different section of Montréal, this gang of storytellers and comedians exuded an affability that their film’s anti-hero would do well to learn from, as well as providing restaurant recommendations North of the Border.

“[W]e needed to get into Alec’s mind because otherwise he was just like this huge loser, and that’s all he was.”—Mitchell Stafiej

For those of you who enjoy James Watts’ on-screen shenanigans, we hope you can check out his film Death Trip, a mumble-gore comedy he co-wrote with his partner, Kelly Kay Hurcomb.

All Jacked up and Full of Worms is currently available for VOD rental or purchase.

PLOT: Roscoe and Benny meet randomly one afternoon and then paint the town red whilst all jacked up and full worms; the bacchanal’s fallout isn’t pretty. 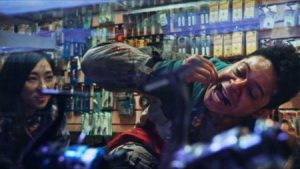 WHY IT SHOULD MAKE THE LIST: There’s lots of manic energy, lots of worms, and though there is only one of them, there’s still too much of filmdom’s creepiest baby doll. All Jacked Up and Full of Worms eschews most logic as its characters careen from mundane life into exhilarating highs, then crash into a third act full of death, violence, fluids—and the ubiquitous worms.

COMMENTS: “There’s only one wrong way to do worms,” Benny proclaims boisterously to a stranger whose motel room he’s just barged into. But the stranger, knowing what’s what, what’s cool, and what it’s all about, casually replies, “Not do worms?”

Bingo. Whatever madness this rundown Chicago milieu has seen, it hasn’t seen nothin’ until these ranks of riffraff find the ultimate high. The riffraff roster: Roscoe, unflappable motel janitor dabbling (also) in New Age-y energy transference; Samantha, girlfriend of Roscoe and insufferable hippie; Jared, interested third-party in Roscoe and Samantha’s relationship, also seen carrying a bucket of his own blood; a pair of possibly homeless worm-junkies, one of whom is never without clown makeup; Benny, a delivery man (?) with a big beard and great need to manifest a baby of his own (name tag reads: Call Me: DADDY); and Henrietta, a kindly prostitute and known addict whom Benny fails to fornicate with. Looming in the background television is a sometime pagan, now born-again Christian, whose soul seems somehow tied to an überworm with the mantra, “You must unlearn your shapes”.

All Jacked Up and Full of Worms unabashedly revels in its body horror roots, drawing much of its inspiration from Cronenberg‘s Naked Lunch. The hook here is worms (if you’ll pardon the bon mot). The film begins like an ensemble comedy, but proceeds mostly along the lines of absurdist-grossout-nightmare. The director introduces each cast member (including the worms) with their own vignette. The entire first act plays like a dingy madcap romp, its joyful madness peaking as Roscoe and Benny ride through a worm-fueled trip (and a concurrent literal one) on a motor scooter.

But as with a worm’s natural orientation, things go sideways, and Alex Phillips reveals his hand. Buried in the dirt of his character’s strange lives is a steadfast streak of seriousness. Roscoe is forced to come to terms with the reactive nature of his existence; and Benny’s trials with his new baby sex-doll (this… was disturbing) elicit far more empathy than perhaps even Todd Solondz could have thought possible. The exuberance morphs into viscera(l) tension, and amidst all the illogical craziness of the double ending, we find peace on one side, and rebirth on the other. And isn’t that what worms are really all about?

“Watching this while actually on something is likely to lead to psychedelic crisis, while its wilfully wacky weirdness – all the unnerving body horror and basic worm puppetry – will leave the straights at best bewildered and at worst bored.”–Anton Bitel, Proijected Figures (festival screening)