Paul Wegener’s The Golem (1920) is not as broadly known today as its German Expressionist peers, Nosferatu (1922) and Cabinet of Dr. Caligari (1920), despite having been a considerable influence on James Whale‘s Frankenstein (1931). The reasons are apparent. Wegener’s later propaganda films for the Nazis certainly hurt the reputation of both director and film. And the Golem itself, with his oversized fright wig, looks more comically surreal than horrific; it was undeniably surpassed by Frankenstein.

Still, The Golem deserves to be better known. It was Wegener’s third “Golem” film[efn_note]The previous two films, The Golem (1915) and The Golem and the Dancing Girl (1917),  are lost, although fragments of the 1915 version survive.[/efn_note] based on the story by Gustav Meyrink, itself based on Jewish folklore. Wegener stars, co-wrote (with Henrik Galeen), and co-directed (here with Carl Boese) each of them. The cinematography by Karl Freund and set design by Hans Poelzig[efn_note]Yes, that’s where Ulmer later got the name for his Satanist antagonist in 1934’s The Black Cat[/efn_note] and his assistant Edgar G. Ulmer considerably enhance its stunning visuals. 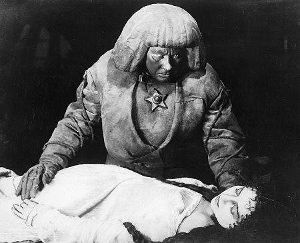 The Golem opens in a 16th century Jewish ghetto in Prague with Rabbi Loew (Albert Steinruck) foretelling disaster for the Jewish community. Shortly after that bit of soothsaying, the Kaiser (Otto Gebuhr) orders the Jews banned. Loew creates a stone figure, the Golem, to protect his people, investing life into it through the demon Astaroth. The scene is impressively shot, with the rabbi encircling the Golem with fire (influenced by the “Magic Fire” of Richard Wagner’s “Die Walkure”), climaxing with a smoky demonic face issuing forth a scroll. Taking the now-animated Golem to the court of the Kaiser, Loew impresses when his creation saves the assembly from a falling roof in a epically staged scene that must have made quite an impression to 1920 audiences. It certainly impresses (or, rather frightens) the Kaiser enough to get the deportation order reversed. Astaroth possesses the Golem shortly afterwards, however, and like  the monster in Mary Shelly’s “Frankenstein,” the Golem runs amok, destroying all in its path. It even turns on his creator, setting fire to Loew’s home and carting off his daughter, Miriam (played by Wegener’s wife, Lyda Salmanova). The scenes of the monster rampaging through the city, with its angular sets and idiosyncratic cinematography, is a testament to the work of both Poelzig and Freund. Anyone who has seen Frankenstein will immediately recognize much of its source. As accomplished as Wegener is as a writer and director, he is even better as an actor, giving an expressive, animated performance and eliciting empathy with his eyes.

The film ends with a group of blonde Aryan girls saving the day, which may be one of the reasons the film wasn’t destroyed by the END_OF_DOCUMENT_TOKEN_TO_BE_REPLACED

Journey’s End (1930) marked several firsts. It was the first film directed by James Whale, and it was the screen debut for actors Colin Clive and David Manners (actually Manners did have one previous credit, albeit uncredited). Journey’s End is a World War I film based on a popular play by R.C. Sherriff. Whale had previously directed the stage play, also starring Clive. The film version for Universal  is a typical example of early sound film that’s overly stage-bound. However, the literate adaptation, bleak ending, Clive’s canny, ulcerous performance, Benjamin Kline’s cinematography, and Whale’s own wartime experiences (as an officer in the trenches) gave a feeling of authenticity to studio heads and 1930 audiences. Luckily for all concerned, it was a tremendous success.

Whale followed with a second, superior war drama, Waterloo Bridge (1931). Starring Mae Clark (possibly in the best role of her career) the film was based on Robert E. Sherwood’s play. Clark’s portrayal of a prostitute in war torn London offended the Catholic Legion of Decency (who voiced no objections to the depiction of war and mass killing). This resulted in the film being unavailable for years. Legion of Decency condemnation or no, Whale’s film was a critical and box office hit upon its release, far superior to both the play itself and the watered down 1940 MGM remake. In the little space of a year, Whale’s style improved dramatically. Gone are all the stagey vestiges of his theater origins. Whale injects a feeling of authenticity and empathy with an outcast character, which led to his securing the prestigious assignment to adapt Frankenstein (1931). It is Frankenstein, not Dracula (1931) which is considered the grandfather of the American horror film, even if Tod Browning‘s take on Bram Stoker’s vampire is somewhat undervalued today in critical reassessment (which erroneously prefers George Melford’s Spanish version). Regardless, Frankenstein is undeniably a superior film to both versions of Dracula, primarily because of Whale’s first-class sense of cinematic lucidity. Another reason is Boris Karloff, who gives a pantomime performance worthy of Chaplin or Chaney. Bill Condon‘s fictionalized Whale biopic, Gods and Monsters (1998), is condescending and unfair in regards to the relationship between Whale and Karloff. By all accounts the two worked very well together, resulting in a collaboration which reaped artistic riches. Colin Clive’s lugubrious portrayal of Dr. Frankenstein is as iconic as Karloff’s monster. Mae Clark, Edward van Sloan and Dwight Frye round off Whale’s Gothic misfit family. Jack Pierce’s makeup and Kenneth Strickfaden’s sets became much imitated. Whale’s handling of crowd scenes is remarkable, as if he personally directed every individual. Most likely this was due to Whale’s military training. Later Universal films helmed by lesser directors show sharp contrast with their mechanical, assembly-line mobs of villagers.

Whale followed his mega-hit with an odd choice: The Impatient Maiden (1932). It was originally titled “The Impatient Virgin,” but predictably that was END_OF_DOCUMENT_TOKEN_TO_BE_REPLACED

Tod Browning’s Dracula is often compared to Murnau’s unauthorized Nosferatu. It is an unfair comparison:the two are very different films, which merely happen to share the same literary inspiration.  (Neither are mere adaptations.  The only film to fairly compare to Murnau’s would be Herzog’s remake with Kinski and, indeed, it compares very favorably).  The vampire of Murnau and Schreck is an accursed, repulsive animal, the carrier of a dreaded plague and the beast fights fiercely to sustain its life, like a rodent in its death throes.  The Dracula of Browning and Lugosi is an outsider, a mesmerizing and intensely austere intruder, who comes to nourish on the aristocratic London Society, who he, paradoxically, yearns to to join (fittingly, for a genuine outsider, it is to no avail of course; he makes rather pronounced overtures and goes to extraordinary lengths to fulfill his ambition there).

Dwight Frye’s pre-bitten Renfield is nearly as strange an outcast as he is after his transformation, albeit in a far

different light. Renfield is a bizarre, urban effeminate in an old meat, potatoes and superstition land. The villagers are outcasts too, but among them, Renfield is the doomed jester, misguidedly blinded by his foolhardy feeling of superiority over them and stubbornly oblivious to the peasants’ warnings.

The introduction to the inhabitants of Castle Dracula is among the most discussed in the annuls of Universal Horror and, to many viewers, it is also most perplexing. This is quintessential Browning. The static silence is punctuated with genuine dread, surreal humor, and the unnerving whimpers of a opossum. Karl Freund’s camera pans over a decidedly unreal set. The vampire brides slowly emerge as a bee scampers out of its little coffin. An opossum seems to be ducking for cover in its dilapidated coffin and its cries are the only living sounds we hear as we are introduced to Lugosi’s Count staring directly at the camera.

Renfield’s journey to Castle Dracula perfectly captures the sensory view of a crepuscular world. Indeed, no other Universal horror film would convey it as vividly and attempts to do so in later films proved pale imitations.

Renfield’s arrival to the castle, and state of confusion, is juxtaposed against the awkward but pertinacious emergence of Dracula. Lugosi’s emergence seems to partake of a genuine struggle and this echoes the delivery of his greeting which follows. This emergence sharply contrasts with the startling and confused appearance of armadillos scurrying in the ruins below, which also heightens Renfield’s confused state.

Critics have unfavorably compared this scene to Melford’s much more fluid shot of Villar’s Count appearance atop the stairwell in Dracula (The Spanish Version). END_OF_DOCUMENT_TOKEN_TO_BE_REPLACED