PLOT: The Pointed Village is going about its business, as it has for as long as anyone can remember, with pointed people making pointed buildings and pointed goods, until Oblio, a round-headed boy, is born. 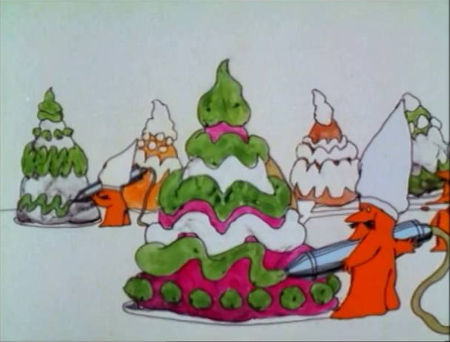 COMMENTS: I can tell you from experience that The Point is a good way to get on the path toward discovering, discussing, and dissecting weird movies. During my formative years, I watched it again and again (though at the time, I must admit that I was frightened by one of the sequences, therefore using the fast forward button regularly). As with so much of what 366 reviews, in my less aware moments I’d regard this Nilssonian flight of fancy as “normal,” but it is in actuality a strange combination of children’s cartoon and beatnik daydream.

In fine musical style, we are introduced to the “Land of Point”: more specifically, the Pointed Village, the town where everbody’s got ’em (and couldn’t do without ’em). Couched in the framing story of a father (voiced by Ringo Starr at his most paternal) reading to his son (Mike Lookinland), The Point concerns Oblio (also Lookinland), a boy born without a pointed head. Oblio makes the mistake of making a fool of the Count’s bully son in a game of Triangle Toss. When the defeated youth complains to his powerful father, a sham trial results in Oblio’s banishment to the “Pointless Forest.” Oblio’s adventures (with his trusty dog Arrow by his side) bring him in contact with a magical assortment of guides—beatnik Rock Man, capitalist-extraordinaire Leaf Man, the bouncing Jelly Women, among others—and he learns that nothing is without a point.

Nilsson’s concept album is primarily a vehicle for his catchy and charming songs concerning love, life, and death. Fred Wolf’s movie alternates between straight-up story (marked by Starr’s narration) and song animations. This coexistence is impressively seamless, as the tunes bring Oblio’s contemplations to life. Some of them are heady things for a small boy—one of the things that kept me coming to this, aside from my limited video menu at the time, was that it didn’t speak down to me—and in its post-psychedelic way, everything has a fresh, oddball feel to it. Watching it again for the first time in decades, I also noticed the many odd things the filmmakers got up to: drug culture (the Rock Man character, both as a whole, and particularly with the line, “us stone[d] folks are everywhere”), anti-capitalism (the ridiculousness of the “leaf manufacturing” Leaf Man), right down to the strangely vulvic foliage where the fat, naked, jolly Jelly Women cavort mischievously.

With its minimalist-but-quirky animation (and gloriously pointo-gothic-brutalist architecture), mental digressions (contemplating a tear’s life cycle through an ancient whale), and moments of Shakespearean grandeur (the villainous Count could be Iago’s closest friend), The Point hits a lot of great notes, particularly for a primetime-broadcast, made-for-TV cartoon. That such a quirky little movie like this slipped past the watchful eye of the normality police makes it all the more laudable.

Previously available on DVD, MVD Rewind released The Point on Blu-ray in 2020. Although full of extra features and billed as “The Ultimate Edition,” many hardcore fans were disappointed that it lacks the original Dustin Hoffman broadcast narration (Hoffman’s contract was for a one-time performance, and subsequent broadcasts and home video releases used different narrators).

“Whether Wolf, best known for his work on The Flintstones, took inspiration from Dr. Seuss, I couldn’t say, but there’s a similar sensibility at work in terms of the quasi-surrealistic look of the thing… It’s that unique combination of the expectedly childlike, the surprisingly adult, and the just-plain weird that makes The Point! work as well for me now as it did in grade school when I’d play the album over and over again, flipping the pages of the illustrated booklet all the while.” -Kathy Fennessy, Seattle Film Blog

(This movie was nominated for review by Jeffery, who commented “My favorite scene in it is the one with the fat ladies.” Suggest a weird movie of your own here.)