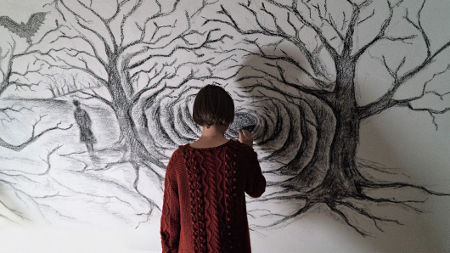 WHY IT WON’T MAKE THE LIST: Sicilian Ghost Story has drawn comparisons to Pan’s Labyrinth for its young protagonist using imagination to cope with harsh reality. It can’t live up to that (perhaps unfair) comparison, however.

COMMENTS: The sense of being in an ancient land where myth and magic, though gone fallow, might spring into life again at any time is an animating spirit of Sicilian Ghost Story. An adolescent character even fantasizes about modernity fading away so he could see the frolicking nymphs and hear the notes from Pan’s flute from the Sicily of yore. Ruins of Roman temples on an outcropping over the beach where the teens play in the surf remind us that all traces of ancient world have not yet passed away.

But ancient gods are not the only spirits around. The mafia also haunts this Sicilian town. No one speaks of them directly, but Luna’s parents forbid the girl from seeing Giuseppe, who seems like a fine boy, because of dark hints about his father. When the boy stops coming to school, no one besides Luna brings it up. She hands out fliers with the Giuseppe’s face on them; tight-lipped, no one offers a lead.

So far, the movie has been a straight drama, a chaste tween love story with a hint of mystery, but then Luna’s visions kick in. As if touched by a prophecy sent from one of those ancient gods, Luna sees the vanished Giuseppe; later, she has a visions of a house, partially underwater. Some of her dreams may be actual clues to the boy’s whereabouts. Queasy pans, blurry screens, and confusion between what is happening inside and outside of Luna’s mind add a fog of disorientation.

The two young leads do an admirable job. The movie’s overall tone is low-key, elegiac, and more than a little depressing. It ultimately shoots for a sense of hope, although the best it can come up with is a life-goes-on shrug coupled with an imperative to not forget. Appropriately so, because, magical realist love story aside, Sicilian Ghost Story is based on a real-life kidnapping that scandalized Sicily in the 1990s.

“…one of the strangest and most creative films released so far this year… a dreamlike, sometimes downright disorientating experience sustained by a tender heart beating beneath harsh realism.”–Ross Miller, The National (contemporaneous)