PLOT: Jessica is fresh out of the psych ward after a mental illness when her husband moves her out to the New England countryside, but the house they have purchased and the surrounding town have a Dark Secret™️. 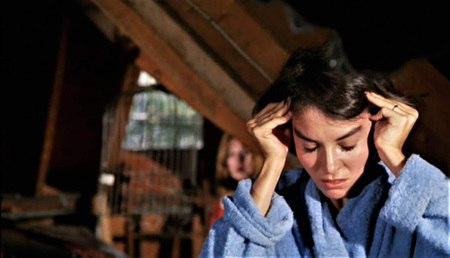 COMMENTS: Let’s Scare Jessica To Death (1971) is the directorial debut of John Hancock; nothing in his career would resemble anything like this movie ever again. Reportedly the script was originally written as a satire of horror movies, but Hancock wanted it reworked as a serious horror movie inspired by psychological thrillers like The Turn of the Screw and The Haunting of Hill House. Horror veterans may groan at this point, because movies like The Incredible Shrinking Man (1957) taught us that converting a horror satire into straight horror is a precarious proposition. Amazingly, this movie outshines these modest expectations as well as its low budget—though not by much. It’s a dubious mix of giallo and Gothic set in a Connecticut location just south of Lovecraft country. True to Hancock’s aim, the tone does land somewhere between Shirley Jackson and Howie P. Right from the opening monologue, we have the title character adrift in a rowboat raving madly to herself while Atlantic seagulls fuss off-screen, followed by our opening theme in somber piano notes. You’ll be double-checking to see if Aaron Spelling produced this for TV.

Jessica (Zohra Lampert) is a bubbly gal recently released from the mental hospital, whose hobby is riding around in the back of a hearse touring cemeteries so she can do charcoal rubbings of headstones—but don’t worry, she’s going to be right as rain! Her concerned husband Duncan (Barton Heyman) has bought a home out in the country for her, based on the old “fresh air and simple living” cure for the mentally twitchy. Duncan’s buddy Woody (Kevin O’Connor), along to help them move in, ends up staying on. Despite the fact that Jessica hears voices in her head every two seconds and sees phantoms that disappear in the space of a jump cut, she’s optimistic for her recovery. The strawberry blonde vagrant they discover squatting at this home when they move in (you better believe she’s revealed with a jump scare) isn’t helping matters any. Emily (Mariclare Costello) offers to pack her things and hit the road, but Jessica begs her to stay for dinner, then indefinitely. No sooner does Emily play her guitar over after-dinner wine (Duncan is a retired Philaharmonic orchestra player, so he brings out his double-bass for accompaniment) than Woody puts the moves on her. You see, this clan is set up to be hippies, or at least part of the counterculture, although the usual Hollywood portrayal of Flower Children is muted here.

They decide to hold a séance and then go swimming in the lake for some jump-scare apparitions. We’re given to wonder, who is the creepy silent woman who’s been playing peek-a-boo in Jessica’s peripheral vision? Let’s load up the hearse with furniture ransacked from the house to sell in town and see if we get some answers. A jovial antique dealer tells them the tale of Abigail Bishop, a name sure to get you burned at the stake in Salem, Massachusetts. Abigail allegedly drowned in the lake by their house but the body was never found, so she’s rumored to be roaming the town as a vampire. Well, that explains the band-aids on the townspeople’s necks! Jessica immediately tempts fate by visiting the grave of Abigail Bishop for one of her tombstone charcoal rubbings, triggering ghost encounter number six (or so). Jessica continues to experience spooky goings-on, while nobody around her believes her because she’s mental. She in turn gets paranoid and thinks everybody’s conspiring to drive her batty again. Meanwhile, in the B-plot, Emily stirs the pot with a love triangle or two, as Jessica starts mixing her up with Abigail’s ghost. Maybe that’s for a good reason? They adopt a mouse and then somebody kills it, but who? Bodies appear and disappear, but “I swear it was right here!” Once you see that we’re fixed to Jessica’s point of view as an unreliable narrator who is getting either haunted or gaslighted, you can fill in the ending yourself.

For a budget movie, Let’s Scare Jessica To Death does a lot with what it has. It’s not bad at all, just not outstanding in any way. Is it weird? Yawn, no! This is a tidy, quirky spook-story with plenty of atmosphere and a very slow burn, but absolutely zero surprise if you’ve ever seen any of the million movies just like it. It’s a bucket-list candidate for horror fans but weirdo fans can assuredly take a hard pass. The people out there calling it a horror classic need to watch more horror movies. The downsides: Jessica’s paranoid internal voiceovers get to be irritating and don’t add to the story. The group is set up to be “hippies” and the townsfolk are supposed to be hazing them for it, but there’s really nowhere for that to go, except to make the atmosphere “edgy.” Even by 1971, we’ve seen everything in this corny yarn done before. Most disappointingly of all, the story seems to be set up for more fascinating twists that never pay off. The upsides: the cast is capable, the camera makes good use of the Nutmeg State location, and darned if director Hancock didn’t really read his Shirley Jackson. This is a mildly amusing, if mediocre, exercise in cozy New England horror with sleepy pacing, but cursed with the wrong title. If I can get some support for this, I’d like to start a petition to change this movie’s title to The Haunting of Hippie House and release the original title back into the wild for a Kickstarter-funded giallo by any director from Italy with a name sounding like “Martino,” “Fulci,” or “Franco.” As the title stands, Let’s Scare Jessica to Death is a let-down for a movie that barely arouses mild interest.

“…a promising exercise in weirdness that will have you hanging until the end.”–Paul Chambers, Movie Chambers (DVD)