PLOT: Young Hikari is bullied because of the electric pylon growing out of his back, but he’s got a time machine; after using it to impress a girl, he finds himself twenty-five years in the future in a land plagued by cybernetically enhanced vampires. 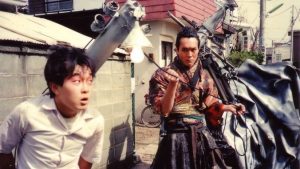 WHY IT SHOULD MAKE THE APOCRYPHA: Seeing as how Tetsuo: the Iron Man is Certified and this film has all the same weird ingredients–and then some–it would be remiss if this did not elbow its way into the growing Apocrypha crowd.

COMMENTS: For those with a smattering of Japanese, the title explains the premise: this movie is about the adventure of “electric rod boy”. Within the movie, he is given the more formal (and heroic) title by a mysterious servant of the time-tunnel: The Electric Pylon Boy! (“The” added for saga-worthy emphasis.) When the most normal character in a time-travel-cyber-vampire story has a metal rod growing out of his back, you know you’re in “weird” territory.

Of course, we’d expect nothing less from Shinya Tsukamoto. Two years before he graced the world with his chef d’oeuvre, Tetsuo: the Iron Man, he put together this pint-sized sci-fi epic that, visually at least, laid quite a bit of groundwork for his more famous tale of technological transmogrification. Not content to merely be the writer, director, and nearly every other role behind the camera, Tsukamoto puts in a turn as one of the doomsday vampires with a performance that fully develops his “fetishist” character in Tetsuo.

Back to The Adventure of Denchu-Kozo. Our hero, Hikari, is the butt of jokes—not just because he’s a nerdy weakling, but also because of the strange, prominent (and totally, totally non-phallic, I swear) growth on his back. He’s beaten up, because “boys will be boys,” but said boys get thwacked themselves by the protective Momo, ever armed with her stick. Thanking his savior, Hikari says, “I’ve got a time machine”, and before you can say, “Are you sure this is a good idea…?,” he zaps himself into the future!

What ensues after that involves a lot of wires (growing and otherwise), some highly self-consciously silly montages, and vague allusions to the explosive substance “Adam Junior” (not to be confused with “Atom…”) whose explosions block out the sun sufficiently for the Shinsemgumi vampires to emerge from hiding and conquer humanity. There’s also the first glimpse of the notorious drill-bit penis that everyone knows and loves from Tsukamoto’s follow-up, as well as plenty of that stop-motion/high-speed character movement that I personally can’t get enough of. And just in case you didn’t think this movie was serious, it also takes La Jetée-esque logic into consideration.

But no, this movie is not remotely serious. Denchu-Kozo‘s respect for coherent time loops is fused with so much random crazy metal junk (figuratively and literally) that any pause for intellectual or emotional reflection is almost immediately derailed by synthesizer-backed action platitudes, pylon bonking humor, or Tsukamoto’s character hamming things up even beyond the main course of Ham with Ham. Incidentally released the same year as science fiction classics RoboCop and Bad Taste, The Adventure of Denchu-Kozo nicely bridges their respective tones of cyber-science-fiction and silly-savage-slapstick.

“….[an] insane forty-six minute short… For such a brash and often perverse effort, it is curious to note that it is sweetly naive: it’s really a child’s story, a superhero origin story, wrapped up in a post-Apocalyptic nightmare, only with violence, nudity, and a woman turning into a doomsday machine.” -Mark Cole, Rivets on the Poster (DVD)