PLOT: A lonely ex-puppeteer tries to dispose of his demonic spider puppet, but it returns to his room every morning. 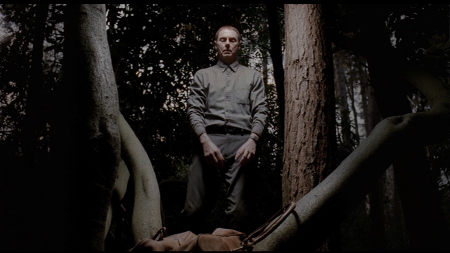 WHY IT MIGHT MAKE THE LIST: Possum earns a look due to its sheer intensity and commitment to a consistent mood of lingering, suppressed evil.

COMMENTS: You’ll know whether you are into Possum or not from the pre-credits scene. Sean Harris, with a face that can only be described as carved into a permanent frown, gray shirt buttoned to his chin, looking like a guy forced to sign up for the sex-offender registry solely because he looks like a pervert, stands in a field while he reads a corrupted nursery rhyme in voiceover: “…Can you spy him deep within? Little Possum, black as sin…” He places a bag at the base of an odd tree formation with seven trunks. Shot from a dramatic low angle, he stands before it, looking down at the package, pensive, uneasy, shoulders hunched, hands pointed inward toward his crotch; two trunks flank him on either side like splayed limbs. A flute plays a nervous melody, accompanied by the deep strings of the BBC’s Radiophonic Workshop, which explode into a cacophonic drone as the titles play. The atmosphere is already thick and dreadful, filled with a tension suggesting horrible repressed secrets.

Possum is great at suffocating you, making you feel like you’re inside the airless mind of a tormented madman. It fills you with apprehensive suspicion. But, up until the end, the story does not really develop so much as pile on. Every day, the same scenario repeats, with hallucinatory variations. Every day, Philip leaves his brown and dingy house with a large sack containing his puppet, Possum, a spider creature with a human head that looks suspiciously like its owner. He slouches about town, avoiding human contact; he throws the bag in the trash, in the river, burns it, but when he wakes up in the morning Possum is there again at the foot of his bed, or hanging on his wall. Other than a few awkward encounters with locals who shoo him away, Philip only converses with his housemate Maurice, an avuncular older man with a veneer of sarcastic friendliness, who obliquely hints that he knows things from Philip’s past—awful things, it goes without saying. Their daily conversations, though nominally about Philip’s indestructible puppet, are almost entirely subtextual. “You show that to children?,” asks a skeptical Maurice.

Although the movie initially plays as obscure, the symbolism is not difficult to tease out, and becomes fairly explicit by the end. But that hardly lessens Possum‘s effect. Although the repetitive first hour may lose impatient viewers, Possum is unforgivingly rewarding to those who stick with it. It wears away at your sanity drip by malicious drip. Armstrong, primarily known to British audiences for his portrayals of Dickens characters in stage and television plays, makes a wily and terrifying villain. Harris completely crawls inside the shell of his loner puppeteer; he generates sympathy while simultaneously remaining alien and creepy. The camera is bleak and the music oppressive. It’s a great movie for those who like their horror emotionally punishing, and no fun whatsoever.

Believe it or not, writer/director Matthew Holness was previously best known to the British public as a comic actor. I haven’t seen his comedy, but I believe he should stick with horror. Possum is an adaptation of a short story he wrote for an anthology themed on Freud’s notion of the uncanny. The movie did not play in U.S. theaters, but it was released on a DVD with extensive interviews with the director and cast. It’s also currently available free to Amazon Prime

“If you’ve dreamed of ‘Ken Loach’s “The Cabinet of Dr. Caligari,”‘ here is the closest such thing anyone is likely to ever commit to celluloid… Fans of conventional horror will no doubt sigh with boredom over the lack of action, but more adventurous viewers may lend this modest but distinctive enterprise its own eventual cult following.”–Dennis Harvey, Variety (contemporaneous)