PLOT: Two roommates rent a bargain flat on Manhattan’s Upper East Side that was previously owned by Jeffrey Epstein. 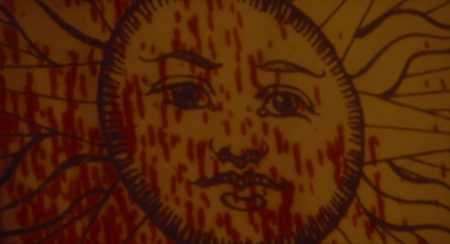 COMMENTS: The awkwardly-titled The Scary of Sixty-First is equally awkwardly made. It feels like an adaptation of a Jeffrey Epstein conspiracy podcast that realized it didn’t have enough crazy ideas to spin into a feature film, so a horror movie subplot was added. At least half the film is spent rehashing the Epstein case without developing any deranged (or even interesting) new theories: there’s the discovery of some arguably pedophilic tarot cards, some real estate research to see if Epstein’s properties form a pentagram, and a doppelganger of Ghislaine Maxwell (who looks almost nothing like the now-convicted socialite—intentionally?) walking around Manhattan, but the hints of occultism never really take root. A lot of potential craziness goes uncrazed: if they could have Q-Anoned the Epstein case into some kind of pareidoliac parody involving the ghost of RFK running a secret cabal out of a fleet of taco trucks or something, they might have had a movie.

While Scary does nothing wrong, cinematically, there is a strong “first film” sensibility at work here. As bold as the choice to center the movie around a contemporary atrocity might be, the rest of the stylistic choices tend to the conventional. The acting isn’t up to snuff: co-writer/director Dasha Nekrasova is fine, but co-writer Madeline Quinn (as roommate Noelle) gives some distractingly flat line readings, and minor characters (a crystal shop owner) go too far into caricature. Fortunately, Betsey Brown’s Addie saves the day—after she gets possessed—with sexual hysterics that include what surely will be the most bizarre Prince Andrew-themed masturbation sequence of the year.

“One oddity worth a look for the adventurous is Dasha Nekrasova’s The Scary of Sixty-First, which is exactly as peculiar and WTF as that not-quite-grammatical title… too eccentric for any easy classification.”–Dennis Harvey, 48 Hills (contemporaneous)

Where to watch The Scary of Sixty-First