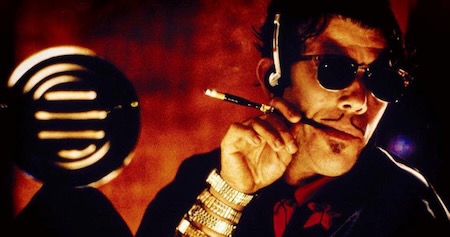 COMMENTS: Geometric backdrops, sweat, a hook-light, and pocketsful of confetti litter the screen as a strange presence raspily sings through songs from a time out of time. Tom is a dust bowl mourner, a piano-side crooner, a cabaret djinni, and a gravel-hammer blues man. He swaps guises at the drop of a hat, instantaneously—because Tom waits for no man. A dreamy New Years Eve alternately thwacks in your ears through a pipe rig percussion solo, or floats gently like the bubbles popping up from an on-stage bathtub. All sunglasses, cigarettes, and watches, Waits in ’88 is an amalgam of decades, fashions, and sentiments, and must be seen to be believed.

Directed by Chris Blum (a man so niche he doesn’t have a Wikipedia page), Big Time kicks off with an alarm clock summoning Tom Waits to sleep. While Waits serenely tosses about on an onstage and rooftop bed, Waits greets us to the show, greasy-haired and hustling time-pieces, running up his arm and set to the trendy times of Paris, Tokyo, Ann Arbor, and Sudan. On stage with his band, Waits shucks to his own quirky performance of his undefinable songs. He charms the audience with stories and quips. “I feel like I can look right into those black little hearts of yours,” he suggests. Later he kicks off a tune with, “The question I get asked the most is, ‘Is it possible to get pregnant without intercourse?’ To answer that, we have to go allll the way back to the Civil War…” Waits operates his own spotlight, and even mans the ticket booth outside—occasionally receiving telephone calls from an unknown agent.

In case anyone here is unfamiliar with the phenomenon, Big Time is the ideal primer for Tom Waits. This “concert film” not only covers a broad range of his musical stylings, but also offers a window into the mind of a man who, by all rights, probably can’t exist. Imagine if the piano bar at the Black Lodge was infiltrated by a radiant imp, or a flare of genteel id rained down over Brecht’s favorite boozer. While many good films inspire you to sit and think, this one makes you want to leap up and create something—anything—so I urge you to watch Big Time, and then smash yourself into that creative project that’s been teasing the corners of your mind.

Big Time has long been out-of-print on home video, but is currently available on scattered subscription services, including Paramount+ and Amazon Prime. For whatever reason, it’s still not available for purchase or rental anywhere else.

“…elements of vaudeville, burlesque and soulful balladry are orchestrated by what is evidently, for all the downbeat, offbeat imagery, a fantastically energetic imagination.”–Time Out

(This movie was nominated for review by Jake H. McConnell, who argued “from performing on stage and telling odd stories to standing on a roof with an umbrella on fire this is a odd film.” Suggest a weird movie of your own here.)