PLOT: A documentary profiling two fans of the pop singer Tiffany who have come to believe that they are involved in an intense and personal relationship with the celebrity. 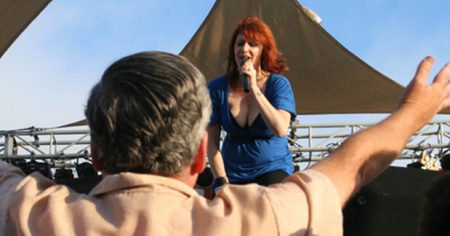 COMMENTS: A woman named Christina Grimmie found when she was very young that she had a real talent for singing. She created a YouTube channel to showcase her performances, which drew hundreds of millions of views and eventually brought her into the orbit of Selena Gomez, who mentored the teenager and brought her along as a backup singer and opener on her tours. At the age of 20, she dazzled the judges of the reality competition show “The Voice,” where she ultimately placed third. Still seeking professional success, she recorded singles and EPs and continued to tour. After a show in Orlando, she met with some concertgoers outside the venue. One of them, an obsessed fan who took advantage of the easy access, shot her dead.

I’m not sure what brings Christina Grimmie to my mind first, considering the number of famous people murdered and attacked by their deranged fans. But there’s something haunting about her youth, about how her potential was still largely unrealized, how her level of fame could best be described as “barely.” She had hardly done enough to inspire the kind of dangerous obsession that would lead to such a tragic end. So I suppose the career of Tiffany, purveyor of such late-80s monster hits as “I Think We’re Alone Now” and “Could’ve Been,” stands as a notable contrast. Given that her biggest achievements were like long-ago fireworks, captivating moments now 30 years in the past, she seems equally unlikely to be well-remembered at all, let alone talked about in the kind of messianic terms that mark the truly obsessed. Such, then, is the curious nature of some kinds of mental illness.

I Think We’re Alone Now follows two individuals whose adoration of Tiffany goes beyond mere rabid fanaticism to become genuinely disturbing. Jeff, a middle-aged man with a readily apparent case of autism spectrum disorder, believes that he has been a crucial part of the singer’s life for years and happily spouts deep-cut trivia and fabulist tales of his relationship to anyone who wanders into his path. He is surrounded by people whose kindnesses and selfish aims only encourage his behaviors. We also meet Kelly, an anguished intersex woman who has struggled with society’s cruelties and her own confused sense of her abilities and situations. She has lined the walls of her home with photo after photo of Tiffany, and while she also seems to believe that she is pledged to the star with the deepest of connections, those feelings seem more aspirational, as if validation of her belief is the only thing that anchors her in a world where she feels utterly at sea.

The movie seems to sympathize with its subjects by virtue of spending so much time taking in their points of view, but while they never confront them directly, the filmmakers present plenty of evidence that neither one is well. Consider a woman who identifies herself as a moderator of a Tiffany fan Yahoo group but is quick to protest that she’s not a crazy person, regardless of what you might think of someone who runs a fan message board for a teen star decades after that performer’s peak. She speaks kindly of Jeff but is quick to puncture his notion that he is in the singer’s inner circle: “Honey, no,” she explains, “see, when all of the security guards swoop in and surround you, it’s not because Tiffany’s protecting you. It’s because Tiffany’s afraid of you.” And she laughs, since it’s so obvious. But it’s most definitely not obvious, as we will see this same man wave about books on stalking and obsessive personality as if they are hilarious jokes.

This tone pervades the film, showing these hopelessly deluded people expressing their alarming thoughts in a light-hearted manner. We watch as Jeff places a bike helmet with some attached wires on his head and says it magnifies his mental connection to the star. There’s some discussion of the time he showed up at the airport to greet Tiffany with a sword and chrysanthemums (supposedly, the emperor of Japan got him off the hook). One of his advocates starts sharing his own cringe-worthy explanations of global conspiracy. It’s impossible to avoid the conclusion that “this man is not well.” So when Jeff follows the object of his affections to her concerts and even to an erotic convention (a restraining order having expired), it’s unbearably uncomfortable to watch, as his gleeful disregard for her comfort zone unspools with gut-churning irrepressibility.

This culminates in the film’s centerpiece, an unquestionably manufactured meet-cute in which Jeff and Kelly make plans to meet up at a Tiffany concert in Las Vegas. There, the differences between their psychoses become profound: Jeff’s imagined connection is entirely data-based, comprised of obscure facts and tied into his view of a conspiracy-laden world. Kelly, meanwhile, derives her obsession entirely from emotion, despairing as she tries to understand why her connection is so unrealized. When they meet the singer, Jeff is typically himself, disregarding any notion of personal space and spewing misguided notions of what Tiffany might find endearing. Kelly is considerably more disturbed by the experience, her ego visibly shattering as the desperate fantasy that has crystallized in her mind runs up against reality. But it’s also at this point that we see the inadvertent complicity of their target. Tiffany’s crowdwork during her concert is all about establishing a relationship: she promises to provide an autograph to everyone in her audience, and warns that she will talk their ears off. She is offering a level of connection that brooks no nuance in these damaged minds. And she has to. Her career is still coasting on the moment in 1987 when she was on top of the world. It pays the bills. It gives her purpose. Because only the very, very famous who can keep their fans completely at bay. The rest are a commodity, and they have to exploit that to the hilt. Smile for the camera. Sign the autograph. Go in for the hug.

It’s hard to understand what director Donnelly’s approach is intended to accomplish. The handmade aesthetic gives it immediacy, but it’s unsettling to think about how the cameras are this close, how much time the filmmakers have spent listening to their subjects’ absurd assertions, how much they are themselves enabling some very dangerous beliefs by giving them air. And in the face of these disturbing questions, we’re treated to an atonal jokey vibe. Consider the goofy supertitles that identify each interviewee. Evidently unable even to afford even the most basic chroma key titling, someone holds up a piece of paper or cardboard with the subject’s name handwritten upon it. This is extremely hard to take seriously, and makes it feel like all the weird behaviors we’re watching are supposed to be entertaining. And for who? Are we the audience? Or are we setting ourselves up to be the next victim?

The movie ends with a horrifying twist, as Jeff has transferred his affections to another unwitting 80s starlet. Kelly, on the other hand, seems to have had a small epiphany from her encounter with the star, and is trying to move forward in her life. The movie doesn’t bother to check in on Tiffany. (Her website says that she is offering special meet-and-greets to concertgoers throughout this year.) But having watched the behaviors of her most devoted fans, it’s hard not to feel that she’s lucky to be alive, an outcome that not everyone in her profession can share.

“…blends a kitsch pop-culture hook to the appeal of the freak show… I Think We’re Alone Now concludes with a mildly upbeat ending – no one gets hurt; one of the characters even seems to improve – which allows the documentary to be filed, like its subjects, into the category of benign oddities. ‘Harmless’ is about as strong a defence that the film can muster.” – Liam Lacey, Toronto Globe and Mail (contemporaneous)

(This movie was nominated for review by tally isham, who, in response to a request for suggestions for strange documentaries, said it  “might qualify as a weird doco. It follows the antics of Tiffany stalkers. And they are really, REALLY bizarre people. I recommend it.” Suggest a weird movie of your own here.)