PLOT: A reclusive photographer obsessed with fear discovers a network of underground tunnels beneath Tokyo, where he finds a mute young woman who feeds on blood. 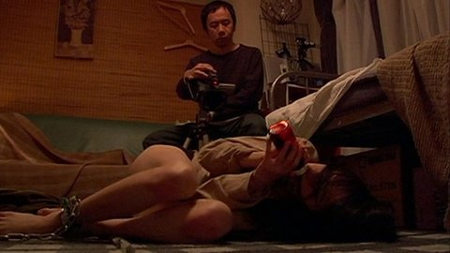 WHY IT MIGHT MAKE THE LIST: This slow-burn horror almost entirely eschews conventional horror narrative structure to serve as a character study of its eccentric, delusional protagonist.

COMMENTS: I still remember the J-Horror craze of the early 2000s—though, living in a mostly third-world country, I had to largely settle for experiencing them through their American remakes.

Thinking back, it really was a perfect way to bring Asian media to the Western world: films like Ringu or Ju-On or One Missed Call, with their foreign settings and basis in regional mythology, were “exotic” enough to feel different from the standard Hollywood fare, but not so overly different or extreme as to feel alienating. Even some of the genre’s more extreme offerings, like Audition, tended to join Cannibal Holocaust and A Serbian Film among the ranks of “extreme films that everyone’s heard about.”

(Of course, that probably renders all those remakes pretty much pointless, but that’s a whole other matter.)

One exception to this was Marebito. Despite coming from the creator of the Ju-On series, as well as its highly successful American remake, Marebito made little impact in the West—perhaps best reflected by the fact that it never got a remake.

And viewing Marebito, it’s not hard to see why: even among the standards of J-Horror (which, around the time, usually went for the slow burn), Marebito takes its time. Many shots simply follow the protagonist as he absently wanders the streets, or stares obsessively at his collection of recordings; and the vampiric young woman at the center of the plot doesn’t even show up until the half-hour mark.

Good for atmosphere, and consistent with Shimizu’s usual approach, certainly; but not very marketable.

Nonetheless, for those who appreciate a horror film with character, Marebito has a fair amount to offer. It’s made clear relatively quickly that the focus of the film is not its fantastical elements, but the eccentric mind of its protagonist. Masuoka (played by Shinya Tsukamoto, best known around here as the director of Tetsuo: The Iron Man) is a withdrawn and disenchanted individual with dark obsessions who is ever hidden behind his camera, relating to the world far better when seeing it through his viewfinder. And all of this is made sharply clear in the first few minutes of the movie, when we see him obsessively watching and re-watching footage that he shot of a public suicide on a subway, trying to discern what the dead man might have seen in his last few moments.

Masuoka is obsessed with the concept of fear, and seeks to uncover sources of fear unnamed and undiscovered by ordinary folks. This, in itself, will quickly endear him to any of us horror fans weary of the samey, formulaic junk that Hollywood has been passing off as “horror” for so many years now. For us, the notion of discovering an untouched, unnamed source of fear, rather than the standard “fear” fare that has already been identified, packaged and categorized, is what keeps us coming back to the cinema year after year. It’s a terrific way of whetting the appetite of the more jaded horror viewer.

Unfortunately, it also makes it a little disappointing when Masuoka does, eventually, discover that unnamed source of fear that he’s been so obsessively seeking.

That’s the thing, really: if there is anything negative to be said about Marebito, it’s that it isn’t as profoundly gripping or as intriguingly different as it feels like it ought to be. Masuoka’s search for the source of ultimate fear leads him to a system of tunnels that twist and turn beneath the earth, leading him to a set of crumbing ruins hidden from the world; but this engagingly Lovecraftian setup ends up feeling disproportionately intriguing compared to its climax, wherein he discovers a bloodthirsty, feral young woman chained to a wall. He brings her back to his apartment and attempts to tame her.

To be sure, it’s not a bad basis for a horror film; but you’d think that a film so heavily focused on the concept of discovering nameless and uncategorized sources of fear would be able to come up with something a bit fresher than a vampire girl.

Nonetheless, the way the film continues here does set it apart in many ways. The conventional horror plot formula is almost completely eschewed: the protagonist is reclusive and withdrawn, interacting with other people no more than he absolutely has to. The result is a film in which the only real characters are the protagonist, his vampiric captive, and the camera he obsessively carts around everywhere. We observe the steady development of Masuoka’s relationship with the bloodthirsty young girl he takes to calling “F”: his obsessive observations, her decline in health, his gradual realization that she requires blood to survive. All of this is intermittently interrupted by Masuoka silently observing his young captive, filming people in the street, or receiving threatening calls from “DEROs”—detrimental robots—who claim ownership of the young girl he has taken. It all fits together very strangely, and at certain points it might even be called incoherent; but it does make for a uniquely structured horror narrative.

Perhaps most importantly, though, the film is very light on explanations. Even when the film’s famous twist—which hints that the whole thing may have been a delusion—is revealed, it’s dropped lightly and casually, treated as if it’s only one potential explanation out of many. Whether real or imagined, Masuoka’s absurd world— where vampires and “detrimental robots” inhabit an underground world, and suicide victims hold casual conversations with the living—makes little logical sense. Perhaps the “ultimate source of fear” that Masuoka is seeking lies not in the vampiric girl herself, but in the intense atmosphere of the world she and he inhabit.

Like so very many of the films on the List, Marebito is most decidedly not for everyone; and to be perfectly frank, I’m not entirely certain I loved it myself. Nonetheless, there’s no denying one thing: as both a J-Horror film and a horror film in general, it broke many of the conventions of the time; and for those who fancy a horror film that prioritizes character and atmosphere, it’s more than worth checking out.

“Filmed on DV in a mere eight days, this dreamy, atmospheric movie does a great job of showing how a technophile exists in a completely artificial world (‘It doesn’t seem real until I see it on tape,’ says Masuoka) while contending with a demanding creature that can’t possibly exist, as his sanity slithers away.”–Staci Layne Wilson, horror.com (DVD)