PLOT: Young Zazie goes to Paris and stays with her exotic dancer uncle; the only thing she wants to see is the Metro, but the workers are on strike, so she explores the city instead. 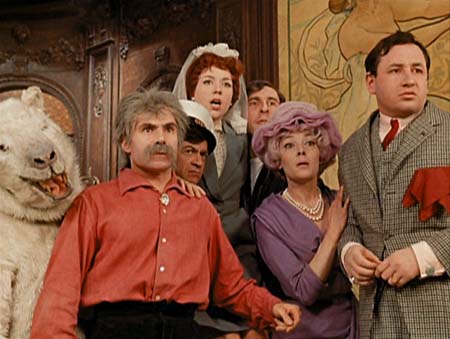 WHY IT MIGHT MAKE THE LIST: It might make the List thanks to its insane, anarchic soul. A minor character casually kills a waiter by firing a woman’s high-heeled shoe at him, and a parrot transforms into a dog when it’s sprayed with seltzer water; something of this sort happens in just about every detail-packed frame of the film.  Zazie’s transvestite uncle proclaims the film’s manifesto: “All Paris is a dream, Zazie is a reverie, and all this is a reverie within a dream…”

COMMENTS: Raymond Queneau’s 1959 comic novel “Zazie dans le Metro” was a surprise sensation in France; with its wordplay, neologisms and nonsense passages, it earned the author comparisons to a French James Joyce.  When Louis Malle decided to adapt it, he wanted to fracture the language of film in the same way that Queneau twisted words.  Malle used a constant barrage of editing and camera tricks as his main strategy for achieving this goal: speeding up and slowing down the film (sometimes within the same shot), having people unexpectedly pop into and out of the frame, and using rear projection effects and tricks of perspective.  There’s a shot where Zazie’s uncle talks to her as she sits on his right, and then the camera seamlessly swings around to show her now seated on his left; in another bit, one speaker in a conversation inexplicably appears in blackface in a reaction shot lasting under a second.  These editing pranks fit perfectly with the movie’s absurd scenarios: this is a film where the protagonists climb the Eiffel Tower and find a sea captain and a shivering polar bear at the top.  As she wanders about Paris, Zazie encounters a strange cast of characters, starting with her uncle (an artiste who dances in drag) and his wife Albertine (who has a mysterious power to hypnotize men with her beauty), and eventually including a dirty old man, an amorous widow with white and lavender hair, a parrot (who complains about the other characters’ yakking) and the aforementioned polar bear, among other eccentric denizens of Paris (the city is virtually a character itself).  Zazie almost has the form of a satire on 1960 Parisians, but it doesn’t work that way, because the outsider—the little tomboy from the provinces—is actually nastier than the adults she torments.  She has a foul mouth (by 1960 standards) and a habit of kicking her elders in the shin or tossing lit bombs at them; she’s inherently sadistic, and wants to grow up to be a teacher so she can torment France’s future brats: “I’ll make ’em eat chalk!  Jab compasses in their rear!”  In the context of the film—a child’s dream of the big city—Zazie still emerges as a likable ancestor of Bart Simpson, a prankster whose job it is to destabilize an already crazy world.  One facet of Zazie that may mildly disturb modern American viewers is the film’s attitude toward childhood sexuality.  Ten year-old Zazie’s curiosity about sex is mostly charming: she wonders what a “hormossexual” is, and brags about being a woman already.  But there are darker undercurrents.  She’s stalked by a pervert from the Humbert Humbert school, who butters her up by buying her blue jeans; over a lunch of fries and mussels she frightens him with a tale of how her mother buried a hatchet in her father’s head, and got off scot-free.  This strand of the tale doesn’t exactly come off as wholesome family entertainment, but it is surprising how innocent Malle manages to make it; from the freewheeling, slapstick tone of the film, we realize that no harm can come to Zazie.  This “disturbing” scene is followed by an extended chase that plays like nothing so much as a live-action Bugs Bunny cartoon.  In true slapstick tradition, Zazie climaxes with a pie-fight; true to its own off-center style, the “pies” are actually plates of spaghetti with sausages on top.  Malle may have attempted to “fracture” contemporary cinema with this comedy, but what  he ends up fashioning isn’t so much revolutionary as reactionary.  The camera tricks he uses hearken back to the earliest days of cinema, when every film was an experimental film; the comedy routines are in the tradition of vaudevillians like Charlie Chaplin (an avowed Zazie fan) and Buster Keaton, mixed with the anarchy of 1941’s mad musical Hellzapoppin’ (an explicit influence).  Thank goodness the Metro was closed during the story, because courtesy of Queneau and Malle, Zazie takes a much wilder ride above ground.

Though a cult hit in France, Zazie was all but forgotten in the rest of the world.  The Criterion Collection rescues it from obscurity with the usual top-notch transfer and collection of extras including contemporaneous interviews with Queneau, Malle, and a shy Catherine Demongeot and her parents, as well as reflections by screenwriter Jean-Paul Rappeneau, art director William Klein, and the mini-documentary Le Paris de Zazie.  Criterion issued Zazie as a companion piece to Malle’s other excursion into weirdness, Black Moon (1975), released on the same day.  Both films feature young female protagonists who don’t fully understand the absurd adult sexual world.  Compared to Black Moon, Zazie is less weird, less dark, and (I think) a lot more entertaining to watch.

“To Americans, Zazie seemed to go too far—to be almost demonic in its inventiveness, like a joke that gets so complicated you can’t time your laughs comfortably… some critics have suggested that for Americans this comedy sets off some kind of freakish, fantastic anxiety.”–Pauline Kael, The New Yorker