Pyotr Ilyich Tchaikovsky despised his own “Nutcracker Fantasy.” Forced into being a populist composer when careers in music were extremely rare in Russia, Tchaikovsky hated much of his own music, which masked a much darker personality: a self-loathing gay (it’s likely that he committed suicide) and a manic depressive. Yet behind that veneer of populism is an unorthodoxy. Leonard Bernstein found a soulmate in Tchaikovsky, conducting his music as if it was Mahler. When conductor Thomas Beecham arrived for orchestra rehearsal, he asked what was on the schedule. When someone answered “Tchaikovsky’s Pathetique,” Beecham quipped, “Let’s do what we can to cheer it up.”

When it comes to films with a Tchaikovskian theme, two come to mind in unmasking the dark-hued musician that classical fundamentalists prefer whited out. One is the infamous Black Swan (2010). The other is 1979’s criminally forgotten Japanese animated Nutcracker Fantasy (directed by Takeo Nakamura), which bypasses sugar plum fairies in favor of something spawned from a combination of Rankin/Bass, Lewis Carroll, and L. Frank Baum, along with slivers of Tchaikovsky and E.T.A. Hoffmann.  The result is authentic bizarreness amplified by considerable beauty (and vice versa).

Young Clara (Melissa Gilbert) is visiting her Aunt Gerda (Lurene Tuuttle) and Uncle Drosselmeyer (Christopher Lee), a clock maker and doll maker. Clara falls in love with uncle’s Nutcracker doll and requests it as a gift. Reluctantly, with his wife’s prompting, Drosselmeyer gives Clara the doll. We soon discover the reason for his reticence. 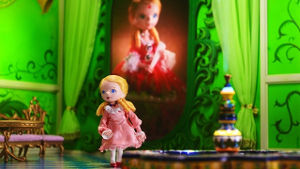 An army of rats prize the doll and steal it from Clara. Chasing the thieving rodents, Clara comes to blows with two-headed rat queen Morphia (Jo Anne Worley). Although the nutcracker comes to life to protect Clara, she still loses the battle and wakes up with a fever. She dreams again, entering the kingdom of the dolls by passing through Drosselmeyer’s grandfather clock; it is hardly a peasant trip, as the dolls are at war with Morphia.

The nutcracker is now Franz (Roddy McDowall), the captain of the guard, and he’s trying to restore the princess (who looks like Clara) back to her old self. The King’s wise men try to break Morphia’s curse, but they suck. So, Clara tracks down the Queen of Time (Eva Gabor) for assistance in breaking the evil spell.  No problem, just destroy the “nut of darkness,” AKA Morphia’s heart. How the hell do you destroy a nut of darkness? With a pearl sword, of course, which Queenie happens to have handy.

A war breaks out, the enemy mice are slaughtered and, it turns out, they were children kidnapped by the creepy Ragman. A tad angry, the captain kills Morphia, but she curses him before croaking, turning him back into a nutcracker. Morphia’s rat son sets out for revenge, but Clara sacrifices herself, saving her nutcracker and thus breaking the evil spell.

That is as good as a synopsis as I can give, because if it sounds like a hodgepodge, it absolutely is. Characters like the Ragman are built up and dropped, and there are loopholes and inconsistencies aplenty. But who the hell watches something like this for coherency anyway? Yes, there are dull stretches, but you will not give hoot or a holler one, because the three-dimensional characterization of Clara, animation, music (which bizarrely includes animated ballerinas morphing into live action ballerinas and then disappearing), and superb voice acting across the board are dazzlingly impressive. Gilbert, Worley, and Gabor give what may be their most impressive performances, and Christopher Lee gets to sing (he actually voices several characters), sounding damned fine.

By, the way, I suppose I should add that it’s weird as hell, and far preferable to all the saccharine Nutcracker productions we’ve all been sadistically subjected to. Why would anyone ever want to watch another Nutcracker in the place of this one? I’d like to think Pyotr finally had his revenge.