PLOT: Part one of a three part documentary on cult movies. 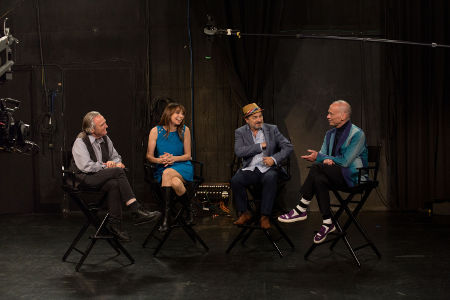 COMMENTS: The charm of Danny Wolf’s talking-heads-plus-clips documentary Time Warp: The Greatest Cult Films of All Time is that, at bottom, it’s just a bunch of knowledgeable film fans sitting around yakking about some of their favorite films, which just also happen to be some of the wildest, weirdest, and most unique visions ever committed to celluloid.

The presentation, however, is a bit ho-hum. There isn’t a great flow from one movie to the next. It starts with a panel briefly attempting to define the term “cult film” (John Waters proposes, “To Hollywood executives, ‘cult film’ means that twenty people who were smarter than them liked it and it lost a lot of money”). They start the survey with an examination of The Rocky Horror Picture Show (1975), not because it was the first cult movie or midnight movie, but because it’s inarguably the most successful repertory feature film of all time. Coverage then segues into The Big Lebowski—because that’s the second most beloved film—and then wanders around, finding opportunity to slip in oddities like blaxploitation movies and Reefer Madness seemingly at random. A more structured approach might have allowed for a deeper appreciation of the historical context and development of these films, but that shouldn’t be a huge obstacle to your enjoyment. The ramshackle order of presentation arguably fits the subject: movies that captivate their audience through passion rather than logic.

Of course, the cult movie geek in me wants to point out that only a few of the pieces covered in this introductory volume were actually “midnight movies” intended to be shown at 12 AM screenings. With Ben Barenholtz (the inventor of the “midnight movie” as a marketing gimmick) on hand, the doc misses a great opportunity to explore a 1970s cultural phenomenon that endures (in an enervated form) to this day. Although it’s relatively senseless to complain about omissions in a subjective project like this, I do think Alejandro Jodorowsky‘s El Topo (1970) deserved at least a name check, seeing as how it was the first film regularly and specifically programmed for midnight theatrical screenings.

But, to be honest, most true “midnight movies” dive deeper into the cult catalog than Time Warp cares to go. The “Midnight Movies” subtitle is therefore a misnomer for this particular doc (volumes two and three, covering “science fiction and horror” and “comedy and camp,” promise to be more tightly focused). But we’ll give them a break, because Time Warp isn’t a graduate cinema course; it’s a freshman “Introduction to Cult Movies 101” offering. And that’s absolutely fine. While I can think of a number of recommended documentaries devoted to individual films or cult figures (Hearts of Darkness: A Filmmaker’s Apocalypse,  I Am Divine), I’m not aware of another film that covers quite the same introductory ground. Time Warp therefore fills a gap. And even if there is a similar documentary out there that I’m overlooking, there’s no way it got this incredible lineup of celebs and icons to chip in their thoughts. I mean, if I told you I had a movie whose cast featured Jeff Bridges, Gary Busey, Fran Drescher, John Turturro, Jeff Goldblum, and Pam Grier, would you watch it?

Four of the sixteen movies discussed here are canonized on our own list of the best weird movies ever made, with Freaks, Pink Flamingos and Eraserhead joining Rocky Horror. I’ll let you tune in yourself for the reveal of the full list of titles they highlight. As we here know as well as anyone, large part of the enjoyment of any list are friendly arguments about what should and shouldn’t have made the cut. We’ll bring you the scoop on the other two volumes as they are released (the horror is set for May 19, while the camp and comedy one drops on June 23).

At the moment, it appears that Time Warp can be rented on Itunes, Vudu, or Fandango Now. We’ll try to update this post if it shows up on other services.

“Beyond the clunkiness of its construction, however, Time Warp nevertheless does cinephiles a great service with its homage to the oddities of the cinematic past. I, for one, was not unhappy with the visit.”–Christopher Llewellyn Reed, Film Festival Today (contemporaneous)