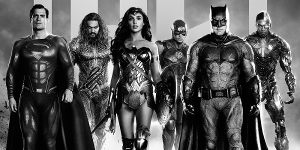 Like the Mango Mussolini cult, Snyder’s fan base heaps their rabid obsessions on the least deserving object of adulation. While HBO Max’s Justice League had strong viewership on its premiere, it eventually got knocked out of the public consciousness when the ape and lizard started strutting their stuff. In a 2 plus 2 equals eight moment, a faction of Snyder disciples made like QAnon (or like Snyder’s Taliban, or Jehovah’s Witnesses at the door—take your pick) to review bomb Godzilla vs. Kong (2021) on IMDB, revealing their barrel-dwelling lunacy. Snyder himself came out of his narcissistic closet, mantling his best Dotard impersonation, thanking his believers for sharing the dream.

Snyder epitomizes macho movie-making for low-demanding pubescents. There’s nothing authentically masculine or aesthetically competent in his Triumph of the Will for the funny papers. Some critics have heaped praise on it, pontificating about its better sense of depth. No, that’s merely excessive exposition from characters that have gone from symbolic (and vulnerable) heroes of justice to two-dimensional combatants, straight out of a soulless Transformer movie, who will eventually team up against a big black shiny villain named Darkseid (Ray Porter) who makes for one of the most personality-bankrupted antagonists in all of cinema.

Wonder Woman (Gal Gadot) is portrayed in sharp contrast to her character in Patty Jenkins‘ films (and although WW 84 is flawed, it’s considerably better than this excrement). She’s merely a video byte here and the only time she manages to emit any light is when she kills (yup, she kills).

The Flash (Ezra Miller, who pales next to Grant Guston) provides the 7th grade humor. Aquaman (Jason Momoa) provides the yawn-inducing macho one-liners, variations of quips we’ve heard in hundreds of action pics. Batman (Ben Affleck, delivering a white trash portrayal of the Dark Knight, repeatedly seen riding a horse) channels Terminator‘s talk of “the looming war” in a banal landscape that literally zaps out all the color that Whedon infused into it. Cyborg (Ray Fisher) and Steppenwolf (Ciarán Hinds, as a digital blob) compete with Darkseid for dullest characterizations. Lois Lane (Amy Adams) waxes wide-eyed, hand-wringing desperation awaiting the resurrection of Superman (Henry Cavill). One would think a literal resurrection would be accompanied by bells, whistles, and a jubilee. Nope. You see, these mother boxes… just don’t ask.

Our “heroes” (i.e., nationalist deities), step down from a Nintendo Mount Rushmore and stand in the drab, ashen horizon. Checking the watch here, one might be thankful for the finale. Nope. That was just a teaser, because there’s epilogues galore to come, all of which practically announce the sequels (which apparently are not not going to happen and/or will be Hack Snyderless).

Patty Jenkins’ Wonder Woman (2017) is reaping critical praise, and opened with an astounding one hundred million dollar weekend box office. It’s being hailed as the best movie in the DCEU—i.e., D.C. comics extended universe—although I’m not sure how exactly that’s different than the DC movies that preexisted that label. Regardless, this is the first big screen standalone treatment of the character, which originally debuted during the Second World War, created by William Moulton Marston and Harry G. Peter. Wonder Woman was always a kind of female variation on Superman. Paradoxically, she was both a symbol of female empowerment and a pinup bondage fantasy. Initially, under the original artists, she was more feminist than titillating. Predictably, it was the pinup quality that drove the bulk of her fan base and informed most of her subsequent incarnations, the notable exception being the series helmed by George Perez’ silvery pencils. Even then, “Wonder Woman” comics never equaled the sales of her male counterparts. When it was announced that Israeli actress Gal Gadot was being cast as the big screen Wonder Woman, a lot of fanboys harped, comparing her unfavorably to 1970s TV Wonder Woman Lynda Carter—because, frankly, Carter has more robust cleavage. In 2011, an updated TV movie was planned, but once publicity stills were released of actress Adrianne Palicki wearing a long pants version of the red, yellow, and blue suit, the DC fundamentalists were up in arms. They wanted legs, dammit, and went the politically correct route of whining about political correctness. The movie, which apparently was a pilot for a series, was purportedly wretched anyway, and seems to have vanished from memory. Five years later, when Gadot’s cameo proved the only bright spot in the execrable Batman vs. Superman, the fanatics were finally appeased, and thankfully silenced.

Wonder Woman is well-crafted, entertaining, and has a charismatic lead, which says a hell of a lot more than the recent crap fests Man of Steel, the aforementioned BvS, and Suicide Squad. It gets right what all those films missed—it remembers that simplicity, primary colors, and ethical nostalgia, all wrapped up in a lasso of fun, are the attraction of the DC characters, who are really more appealing than their angst-ridden Marvel competitors. With a few exceptions, the multiple DC based TV series (live action and animated) get that right (i.e., “The Flash,” “Supergirl,” and the recent “Batman: Return of the Caped Crusaders,” which could as easily have been dubbed “The Return of Adam West, Burt Ward, and Julie Newmar”).

One of the main positives here is the direction of Jenkins, who is far better suited to the material than the dullard boys have proven to be. Predictably, right-wing fan boys, while giving faint praise and END_OF_DOCUMENT_TOKEN_TO_BE_REPLACED