His name may not exactly be celebrated among cinephiles, but K. Gordon Murray‘s impact on the mid-20th century movie scene is undeniable. Growing up in an environment of circus performers and vaudevillians, Murray made a fortune in the 1950s and 1960s by importing low-budget family films (among other genres) from Mexico and Europe, dubbing them in English, and re-releasing them on the US market, showing them at cheap weekend screenings. Providing affordable afternoon film screenings aimed specifically at children (and at pre-digital age parents looking for a way to keep the kids occupied for a few hours) earned Murray the title “King of the Kiddie Matinee.” 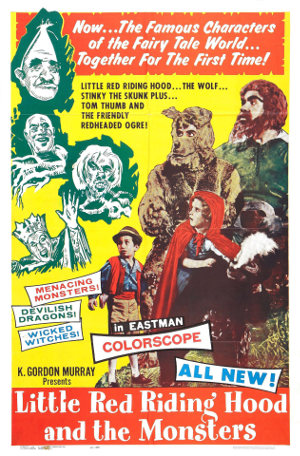 But besides revolutionizing the concept of the children’s matinee, Murray also inadvertently assisted in the creation of a certain subgenre of film that flourished in and around the 1960s —one which, though rarely discussed, is the source of some of cinema’s finest examples of unintentional weirdness.

This particular subgenre has never been given an official name, but the term “grindhouse children’s films”, coined by internet critic Brad “Cinema Snob” Jones, encompasses its nature quite well. With their grainy visuals and audio, hokey acting, and flimsy sets, these movies do indeed call to mind the grindhouse cinema aesthetic. The films’ content, meanwhile, are clearly crafted for a kid audience. This dissonance results in distinct examples of mid-century cinematic weirdness, some of which have made it into 366’s Canon.

While a many entries in this genre were the work of Murray himself, many more were made in his wake, churned out at minimal cost to take advantage of the easy profits of the matinees Murray had helped invent. Perhaps one of the most bizarre (and egregious) was 1965’s Fun In Balloon Land. Produced by Giant Balloon Parades Inc., and the sole directorial credit of Joseph M. Sonneborn Jr., this little absurdity pushes itself to 52 minutes by poorly slapping together two unrelated segments. One consists of a young boy wandering around a cavernous warehouse filled with assorted parade balloons (which, with their vast sizes, bulbous shapes, and poorly-painted features, are frankly the stuff of children’s nightmares) and holding awkward conversations with them; the other is a recording of a Thanksgiving-themed balloon parade with a narrator gushing over the (equally ugly) floats with frightening enthusiasm. 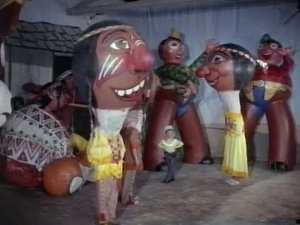 It’s clearly one of the worst examples of the subgenre, but at the same time, Balloon Land exemplifies what makes it distinct: content so family-friendly and “wholesome” that it’s intensely condescending, played out against a backdrop of desolate, empty-looking sets and set-pieces so poorly made that they become horrifying, all put together so haphazardly that what little narrative there is becomes unintentionally abstract. And despite the usually nonexistent budget of such films, they ironically feel almost impossible to recreate; they’re shaped by a total cluelessness of even the most basic aspects of filmmaking that simply cannot be faked.

Other examples are rife. Besides Murray, there’s a few other individuals make noteworthy contributions to children’s grindhouse. Perhaps the most infamous is Barry Mahon. A World War II veteran and prison camp survivor whose post-war career consisted mostly of directing softcore porn, Mahon also peppered his directorial resume with low-budget children’s films. 1969’s The Wonderful Land of Oz was a reportedly accurate adaptation of the second “Oz” book with production values only slightly higher than a school play.  Actors murmur their way through the script, a papier-mâché cow head is about 30% nostril, and the costumes, while not nearly good enough to be convincing, are just elaborate enough to be disquieting. Mahon’s later Thumbelina, a fairytale adaptation best known for making up the greatest part of Santa and the Ice Cream Bunny, had a similar school-play aesthetic, complete with grainy rear projection and animal costumes so crude that many of them are impossible to identify.

Indeed, a resemblance to elaborate school plays might be considered a calling card of the subgenre. 1967’s The Magic Land of Mother Goose took this to its logical extreme by literally being performed on a high school stage. It consists of a cast of stock fairy tale characters prancing about, and Old King Cole shooting off a few misogynistic quips. At times, a viewer can believe that they’re watching a recording of a surprisingly elaborate school play rather than an incredibly cheaply-produced film. The result is a jarring, disorienting experience. 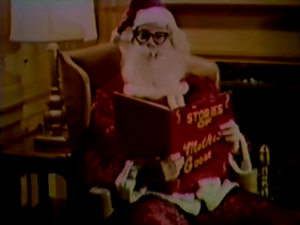 Incidentally, The Magic Land of Mother Goose (which, in a similar vein to Thumbelina, was later slapped with an unrelated Santa-themed opening and re-released as Santa Visits the Magic Land of Mother Goose) was created by infamous “Grandfather of Gore” Herschell Gordon Lewis. The casual relationship between children’s matinee schlock and established exploitation directors explains a lot about the genre.

Returning to Mahon, however, perhaps his most distinctively matinee-styled film was his final directing credit, Santa’s Christmas Elf (Named Calvin). Telling the simplistic story of an incompetent elf stowing away in Santa’s sleigh and accidentally being given away as a present to a little girl, the film is composed entirely of still shots. Most of the characters are portrayed by dolls propped up and photographed in various poorly-lit poses, with the story conveyed through voiceover from the narrator of Santa and the Ice Cream Bunny. It’s a fractionally more polished version of what a child with a camera and basic editing software might put together in their very first attempt to make a film. It is deeply strange, and rather frightening, in how naively inept Calvin is at every aspect of filmmaking.

Christmas films are a staple of the subgenre; after all, what better season to squeeze a few extra dimes out of kids? 1959’s Santa Claus, one of Murray’s many Mexican imports, set the precedent, and it was followed by a number of similarly cheap Christmas-themed films. Almost as popular was the approach taken by Santa and the Ice Cream Bunny or Santa Visits the Magic Land of Mother Goose: take old films wholly unrelated to Christmas, clumsily attach new, unrelated segments featuring Santa and a few store-bought Christmas decorations, and re-release the film as a Christmas movie. This approach, besides being deeply cynical, also underlines the unintentional cinematic weirdness of children’s grindhouse by producing a line of movies that are like unrelated strips of film stuck end to end, intensifying their narrative incoherence.

In a day and age where entertainment platforms are more widely accessible than ever, the notion of low-quality, low-value, unintentionally frightening media aimed at children is more familiar than ever (remember Elsagate?) But there’s something about this particular sort of exploitative children’s entertainment—something about how deeply infused it is with mid-20th century culture and technology—that makes it a distinct piece of cinematic history, and one which ought to be remembered.

12 thoughts on “THE WEIRD WORLD OF CHILDREN’S GRINDHOUSE”