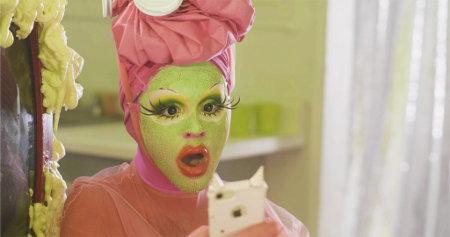 COMMENTS: The character in the Marge-Simpson-sized fishnet hat stuffed with pink balloons wearing two-inch lashes with lime-green eye shadow only gets a couple of lines. She is not a sideshow freak in Holy Trinity‘s strange world, but just a regular background character[efn_note]She is, in reality, the Imp Queen, a Chicago-based trans woman drag performance artist of some notoriety.[/efn_note], like the pattycake-playing human kitty cat or the big bearded medium in lavender robes with flowers in their hair.

By contrast, Trinity, our friendly orange-haired dominatrix protagonist, and her sweet submissive slave, the shaven-headed Baby, are almost “straight” characters. Their relationship is tender, despite the fact that Trinity keeps Baby tied on a leash about ninety percent of the time. They exist in a flipped fantasy world where alternative culture and sexuality is the norm, and normality is nowhere to be found. The giant Glamhag corporation supplies all this world’s needs, from diet sodas to Orixaoco spiritual air freshener. Every living room looks like it was conceived and designed by a drag queen art major while tripping on ecstasy. TV sets are draped in decorative foam. Everyone spends two hours a day putting on makeup and selecting their wardrobe just to go to the corner grocery store. The bananas aesthetic reaches its height at Sunday “church” service, where the local weirdos all gather for a weekly bacchanalia that’s a cross between a Halloween pride parade and a makeshift disco set up at a school cafeteria held on “come-as-a-sexy-nun” night.

Besides all that, there’s visions of the afterworld, a big butch angel, discussion of the ethical implications of psychic powers on the consensuality of bondage and discipline sessions, and shots at the hypocrisy of religion (typified by a priest who’s a big Madonna fan). Also, although everyone in the movie speaks like an American (with the exception of one character who speaks subtitled Portuguese), they pay for everything with Euros. That currency choice is one of the least strange features of Holy Trinity‘s universe, but it strikes me as a good reminder of how far the movie goes to ensure that absolutely everything is off-center.

John Waters is the obvious influence here, but instead of the witty misanthropy and satirical ugliness of his early years, or the campy nostalgia of his later works, the movie sets a sunny, optimistic tone of triumphant intoxication and celebration of eccentricity. Holy Trinity‘s universe is a sex-positive, kink-positive, freak-accepting psychic utopia.

Holy Trinity makes its debut at the Outfest Los Angeles LGBTQ  Film Festival tomorrow, July 19. I have no doubt it’s an appropriate and welcoming venue. But while there are plenty of obviously gay and lesbian characters in the film, the central relationship explored here is heterosexual (although ultra-kinky). Holy Trinity is “queer” in the original sense of the word, but I’d hate to see it pigeonholed as an LBGTQ special interest film: like The Rocky Horror Picture Show or the works of John Waters, it speaks to all free spirits and outsiders, even the straightest among us. If, like me, you’re the kind of person who relishes the opportunity to tell casual acquaintances “I saw this movie about a paint-huffing dominatrix who talks to the dead the other night,” you’ll want to prioritize this one.

PLOT: The Son of God recruits retired Mexican wrestler “Santos” to help him defeat the

vampires who are preying on Ottawa’s lesbian population.

WHY IT WON’T MAKE THE LIST:  It’s defiantly odd, but not consistently funny or entertaining enough to rank among the all-time greats.  If you saw any two-minute stretch of JCVH selected at random, you might be convinced that this was a work of camp genius; but string 45 such segments together, and the comedy value runs a little thin.  It’s a hard movie to peg: in its own way, given its low budget, its a sort of masterpiece, and at the same time it’s sort of a disaster.  I think that if it had offered us one less overlong kung fu battle, and one more song and dance number, it might have had a shot at exalted weirdness. Ultimately, though, just as the tone is more irreverent than blasphemous, the style is more zany than weird, and that should keep it off this particular List.

COMMENTS:  Jesus Christ Vampire Hunter is a stew of pop-cinema leftovers, mixing kung fu with horror, Mexican wrestling and even scraps of blaxploitation, all seasoned with a hint of sacrilege.  Like all peasant cuisine, it will be comfort food for many, but offend some refined palates—it’s definitely an acquired taste.  The technical aspects effectively evoke the feel of late seventies/early eighties exploitation movies, with drab urban cinematography, sound obviously added in post-production, and even a cheesy “waka-waka” funk theme as the heroes cruise down the highway. The action scenes are a problem here: for one thing, there are too many, and they’re too long. They’re just competent enough to remind us that they’re not quite up to snuff; Phil Caracas’ Jesus shows reasonable high-kicking athleticism, but he’s no action hero, and it would have been funnier and more endearing if he’d been clumsier. At any rate, the movie can’t be accused of false advertising. The campy/sacrilegious title scares off the squares and the fundies (though it’s obvious the filmmakers are clearly fans of JC’s philosophy of love and tolerance, if not proponents of his divinity). More to the END_OF_DOCUMENT_TOKEN_TO_BE_REPLACED

SEAWEEDHEAD GREASER: Coo Coo.  I wish I could put my arms around each and every one of them, and let them know that everything is going to be okay.

PLOT: Perpetually constipated Seaweedhead Greaser and his gang of hired guns run a small Western village in the middle of the desert. One day Jessy, a mild-mannered hispter in a zoot suit, parachutes into the nearby countryside. Jessy, who is traveling to Jerusalem to become an actor/singer, stops in town to walk on water, repeatedly resurrect Greaser’s son Lamy Homo after Greaser has him killed, and do a boogie-woogie song and dance number before winding up crucified.

INDELIBLE IMAGE: Jessy, still in his striped suit and white gloves and shoes, crucified, with his pink and lavender hat perched atop the cross.

WHAT MAKES IT WEIRD:  Set in a barren town in the old West, Greaser’s Palace is a series of bizarre sketches which run a gamut from arid comedy to hints of disturbing perversion. These absurd anecdotes hang off a storyline that loosely and enigmatically follows the outline of the New Testament. In a movie where the Holy Ghost appears as a cigar-smoking man wearing a bedsheet with eyeholes cut in it and a black stetson, whether the movie is weird or not is the last question you’re likely to be asking yourself.

COMMENTS: A man leaning on a crutch waits for the “messiah” to come and heal him. END_OF_DOCUMENT_TOKEN_TO_BE_REPLACED