PLOT: A disaffected teenager investigates the mysterious disappearance of his ex-girlfriend, confronting untrustworthy allies and vicious enemies to uncover the truth. 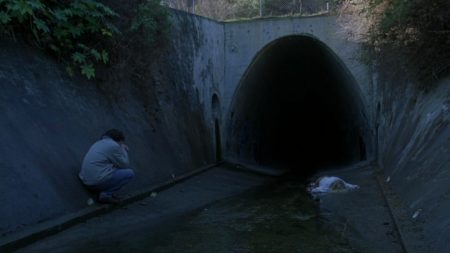 COMMENTS: For reasons that can only be attributed to a breathtaking lack of imagination, a surprisingly large number of contemporary reviewers of Brick made a direct comparison not to the large number of noir classics from which Rian Johnson’s debut feature clearly takes its inspiration, but instead go all the way back to 1976 for the cult oddity Bugsy Malone, a gangster pastiche in which all the parts are played by minors (including Jodie Foster and Scott Baio) wielding Tommy guns that shoot whipped cream. The thinking, one imagines, is that just as one film mocked the conventions of the gangster picture by populating it with children, so does the other diminish the power of noir by setting it in a high school.

The comparison is stunningly short-sighted and backwards. Johnson’s high school noir draws its power not from the dissonance of substance and style but from their harmony. It’s often said that everything in high school feels like a life-and-death situation, when in reality things couldn’t be less serious. But the stakes in Brick are no joke at all. Blood is spilled, bodies drop, and nearly everyone is laden with secrets and lies. Those feelings you had as a teenager? Brick makes them all very real.

Famously edited on a Macintosh back when that was a symbol of scrappiness and indie cred, Brick is a debut of astonishing power and confidence. Johnson is not necessarily a visual stylist. (By way of illustration, this parody pinches his entire shot list while placing a discussion of the fallout over the filmmaker’s foray into  the Star Wars universe into all of Brick‘s locations.) But his vision is so self-assured, it’s absolutely easy to see the rich career that lay ahead of him.

Someone who must have spied Johnson’s talent even earlier is lead Joseph Gordon-Levitt, who had to have recognized that he had been gifted with the role of his dreams (and he has been appropriately grateful, taking a starring role in Looper and offering voice cameos to The Last Jedi and Knives Out). He manages to walk the line between embodying a hard-bitten detective while looking like a bookish 17-year-old. His perfectly weathered burgundy shoes and increasingly bruised face make him a worthy successor to Sam Spade, which makes him a natural focal point for the film’s rich and quirky cast of characters. In particular, he gives tremendous power to Zehetner, a END_OF_DOCUMENT_TOKEN_TO_BE_REPLACED

PLOT:  Bloom is the passive brother floating in the wake of his older sibling Stephen, a Dostoevsky among con-men, who devises one last elaborate grift to rip-off a pretty, rich and very eccentric widow. WHY IT WON’T MAKE THE LIST:  Quirky, not weird.  For the weird fiend, watching a film like this is the equivalent of taking cinematic methadone while waiting to score some big-screen bizarre.

COMMENTS:  Though supposedly set in Montenegro, Prague, Mexico, St. Petersburg, and on a luxury steamer crossing the Atlantic, the real action in The Brothers Bloom is set firmly in Hollywoodland, a mythical, ultra-sophisticated realm where con men dress in pinstripe suits and bowlers to keep a low profile.  Our guides through this wish-fulfillment landscape of daring capers and champagne breakfasts are as quaint a collection of quirks as one might expect to bump into outside of a wine and cheese party held inside Wes Anderson’s noggin: Stephen, a master grifter who writes real-life dramas for his marks designed not only to make him money, but to keep them happy by fulfilling their need for romance and adventure; Bloom, a mopey soul who has lost his own identity through playing out Stephen’s scripts since childhood; Penelope, the socially backward heiress with a prodigal talent for absorbing other people’s skills, whether juggling chainsaws or making cameras out of watermelons; and Bang Bang, the nearly mute Japanese munitions expert, the screenplay’s most original invention and the one character who leaves us wanting more.  The cast does well, especially Brody as Bloom and a bubbly Weisz as Penelope (though however eccentric and awkward she might be, one has to seriously suspend disbelief to imagine that this pretty and very wealthy young thing isn’t swamped with suitors and hangers-on).

The con game is one of the toughest scripts to write, depending on its ability to surprise viewers who’ve seen many a twist ending in their day, and Johnson makes the task even tougher on himself by raising expectations and promoting his guys as the best in the business.In the end the final execution of the game doesn’t surprise, but the alert viewer has lots of fun along the way playing the multiple angles in his head, imagining possible double crosses as new players come into the field.The film runs out of gas before the end and sputters through a disappointing and overly sentimental epilogue/fourth act, but it doesn’t erase the enchantment built up until that point.A whiskey drinking camel and some interesting live action puns round out the fun.

“‘The Brothers Bloom’ is set on a planet somewhat like our own, but far wackier… The movie is wonderfully weird.”–Kurt Loder, MTV