There’s something inherently weird about hotels. After all, they are a temporary domicile, a place you call home for a limited time, and you share the experience with dozens of other people you will never know. (I’ve stayed on more than one occasion at a chain dubbing itself “Home 2,” like it’s the sequel to the much-loved original.) It might explain why we see so many films about them on this site, from hotels that house transient mental patients to hotels stored in the private parts of ancient vampires to hotels where couples meet again and again to decrepit hotels to hotels on the edge of the apocalypse and beyond. So maybe it shouldn’t be too surprising to find two different films in our suggestion box that are content to leave the title at Hotel. Arguably, that alone should tell you it’s about to get strange up in here.

Notably, this pair of films offers us differing points of view: one largely concerning the guests, the other centered on a member of the staff. 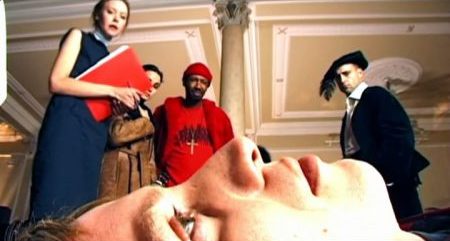 PLOT: A film company attempts to shoot a guerilla-style version of “The Duchess of Malfi” while based in a hotel that practices cannibalistic vampirism.

COMMENTS: This hotel variant is a directorial showcase. Figgis indulges all the techniques at his disposal: handheld cameras shooting hyper-saturated video, improvised dialogue, and the same quad-split screen storytelling that he indulged in Timecode. Some have suggested (and a line of dialogue insinuates) that he’s actually playing with Dogme 95 techniques, although his production violates most of Dogme’s rules. What he really seems to be doing is utilizing the same let’s-film-and-see-what-happens philosophy that he’s depicting. So it’s improvised. Real. Which is potentially interesting, especially when his actors are up to the challenge. But it can be equally deadening if they’re not. Sometimes there’s a payoff, like Burt Reynolds’ inexplicable turn as the director of a flamenco troupe, yes-anding his way through a scenario that would not seem to call for him at all. But you’re as likely to get a scene like Salma Hayek and Lucy Liu screaming at each other. Is that really the most interesting thing they could think of to do? It’s weak improv, which makes it weak cinema.

The all-star cast is a huge part of the appeal. It ends up playing like one of those live theatrical experiences where you get a different experience based upon which actors you choose to follow. The real-world examples of this can result in something classy or trashy, and much the same is true here. Consider Rhys Ifans’ gleefully confident turn as a power-mad director, a performance which borders on parody but is the liveliest thing in the film, until he is curiously sidelined before the halfway mark. His counterpoint is David Schwimmer’s END_OF_DOCUMENT_TOKEN_TO_BE_REPLACED