DIRECTED BY: Lana Wachowski, Lilly Wachowski (as The Wachowski Brothers)

PLOT: He’s Speed Racer, and he drives real fast; the corporate goons at Royalton Enterprises fail to hire him, and so try to sabotage his family and career. 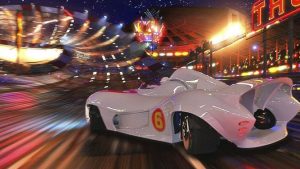 WHY IT MIGHT MAKE THE LIST: Made up of equal parts technical prowess, tremendous passion, and mind-boggling stupidity, the Wachowski siblings poured all their knowledge, soul, and their massive bag of Matrix-era goodwill into this videogame-cum-technicolor-comedy-melodrama that, while obviously the movie they had in mind, raises the question of whether or not it actually should have been assembled at all.

COMMENTS: Our weekly to-do list of new and re-released opportunities was sparse, so I instead pondered the Venn diagram of “reader suggested movies” and “movies I have access to.” Three titles presented themselves, and it was Speed Racer that managed to zip to the top of that last. (This may have been, in part, because its alphabetical position meant it was the closest to my Blu-ray player.) I hadn’t seen this movie since before I began working with 366, and it was just a hazy memory of bright colors, flying sparks, and a strange pathos provided by John Goodman and Susan Sarandon. My memory did not disappoint me.

As a facsimile of a racing computer game, Speed Racer has just enough plot to justify the on-screen zip-bang-light-up race shots. Speed Racer (née “Speed Racer”, played by Emile Hirsch at his charmingly blandest) lives up to his name and follows in the Racer Family tradition of racing race-cars. (His older brother, Rex Racer, disgraced the family and died in a horrible explosion during a sketchy rally race.) Purple-clad corporate bad guy E.P. Arnold Royalton, Esq. (played with effete glee by Roger Allam) tries to woo Speed to work for Royalton, Inc.—but Speed has none of it. Not used to being snubbed, Royalton uses his considerable resources to destroy the Racer family, not knowing that in the end, “the truth will out.”

I’m admittedly a sucker for a well-told story, no matter how stupid the underlying material. This movie brings stupid into overdrive with countless “just because” elements. There are Cockney gangsters who act as fixers and enforcers; there is, among other themed teams, a Viking racing crew obsessed with animal fur; and then there’s the thread that boldly attempts to hold this movie together, the “Inspector Detector” character investigating corruption in the racing leagues. (The less said about the recurring deus-ex-Spritle/Chimp-machina, the better.) The Wachowskis then painted all this with halogen colors that would have sent more cynical members of our staff into a tailspin of bitter, whiskey-fueled reproaches.

I am not that sort. I can appreciate the fact this extravaganza had an estimated $120,000,000 poured into it. I can also believe that it did not recoup the outlay. But that’s why it falls so firmly into our orbit. To see two of the best technical film-makers of their day so wholeheartedly stake their years-built reputation with something as confounding as Speed Racer gives me, at least, hope. (What gem might, say, Michael Bay concoct if told he could really do anything?) The Wachowskis did the world a disservice with the whole Matrix nonsense. They made up for it with Speed Racer: a movie that had me rooting for the good guy even as my eyes melted and my brain tried to shout down the cacophony of electro-Singh-visuals, “Lifetime Channel” monologues, and top-tier talent somehow grounding this eye-candy-fluorescence. The stars are likely to never be so aligned again.

“This toxic admixture of computer-generated frenzy and live-action torpor succeeds in being, almost simultaneously, genuinely painful — the esthetic equivalent of needles in eyeballs — and weirdly benumbing, like eye candy laced with lidocaine.”–Joe Morgenstren, The Wall Street Journal (contemporaneous)