“I remember I had some exaltation about color. I see colors not like they are normally – we see colors in the object. In this case, I saw colors, just as they are, detached from the object. I had for the first time the feeling of the presence of the color in a detached way.”–Federico Fellini

PLOT: Juliet, a wealthy housewife, has reason to suspect her husband is cheating on her. She has always been attuned to the spirit world, and after a seance she begins seeing visions and hearing voices; one of the whispering entities tells her that her neighbor, the strange, sexually liberated Suzy, will be her teacher. As her marriage disintegrates, her visions become harder to distinguish from reality, until Juliet snaps and banishes the spirits. 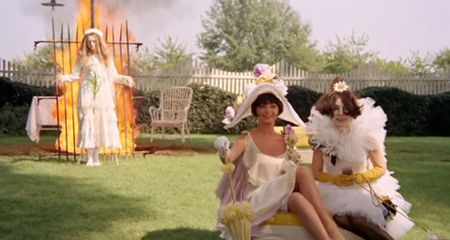 INDELIBLE IMAGE: Juliet of the Spirits parades a host of bizarrely costumed Felliniesque grotesques across the screen in its 130 minutes, but aside from the perpetually smiling eye-of-the-storm Masina, the one who makes the biggest impression is buxom, bodacious Suzy (Sandra Milo). In one of the movie’s unforgettable scenes, she disrobes (offscreen) in the blink of an eye to demonstrate one of the hedonistic accoutrements in her bordello-like haven: a slide winding directly from her bedroom to her personal post-coital swimming pool.

WHAT MAKES IT WEIRD: Like his previous 8 1/2, Juliet of the Spirits is a Fellini trip where dreams and fantasies—the more baroque and colorful, the better—intrude into reality as a way to explore the psychology of the film’s protagonist.

Original trailer for Juliet of the Spirits (1965)

COMMENTS: Juliet of the Spirits is transitional Fellini—most obviously, in updating the director’s palette to the full color spectrum, END_OF_DOCUMENT_TOKEN_TO_BE_REPLACED

AKA The Night the Screaming Stops

“…Viktor Shklovsky wrote about how the job of the artist was to come up with a device that made the familiar seem strange. The ‘strangeness’ sets our brain a challenge, and the process of dealing with it is engaging – not just on an intellectual level, but an emotional one too… In Possession, Żuławski made a marital breakdown ‘strange’ by showing ‘the horror’ – this was not Scenes from a Marriage – it was something else.”–Daniel Bird

“Nothing wants to bite anymore – they want to lick.”– Andrzej Zulawski, from the Possession commentary track.

PLOT: Mark, an agent for some unspecified agency, returns home to his wife, Anna, and son in Berlin only to find that Anna has taken a lover. She splits her time between her home and her lover; however, Mark still wants her, causing extensive conflict between them. He uncovers a previous affair with a man named Heinrich, but she also left him for another—and finding the identity of her current lover leads to mayhem and a rising body count. INDELIBLE IMAGE: In a film with many memorable images, mainly close-ups of the characters in various stages of mania, the one that sticks is of Adjani’s Anna being serviced by something coiled around her… and writhing.

WHAT MAKES IT WEIRD: It starts out as a domestic drama turned up to 11, which then goes up to 15. The intensity is compelling, especially when most other relationship films at the time went for quiet decorum. Possession throws all that right out the window. And then at the midway point, it drops the bottom out of expectations with the introduction of the Creature.

COMMENTS: There seems to be no major disagreement about Possession joining a list of “weird” anything. The fur begins to fly in the END_OF_DOCUMENT_TOKEN_TO_BE_REPLACED

Possession has been officially promoted onto the List of the 366 Weirdest Movies of All Time. This post is left here for historical purposes. Please read the official Certified Weird entry.

AKA: The Night the Screaming Stops

PLOT: A secret agent finds himself in a real mess when he hires a detective to track his unfaithful wife. WHY IT SHOULD MAKE THE LIST: With campy acting, absurdist elements mixed with existentialist philosophy, arty cinematography, and a story full of all kinds of bizarre and wacky stuff like sex with sea creatures, pointless self mutilation, and people making funny faces for no apparent reason, Possession is practically tailor made to make the List. While I personally don’t think Possession represents a serious effort to convey meaning substantial enough to qualify for the List, I am confident that most viewers will strongly disagree with me.  Possession has a resolute feel about it that will be enough to convince most fans of weird movies that it is a meaningful and significantly weird cinematic endeavor.  Out of deference to those fans I hereby recommend it without reservation.

COMMENTS:  A love triangle among eccentric characters spirals out of control and becomes a love octagon. And the protagonist’s girlfriend is in love with some of kind of octopussy thing.

Sam Neil plays a spy who quits his job to spend more time with his girlfriend and out of wedlock son.  She leaves him, he has a nervous breakdown that leads to a three-week black-out, he meets the new boyfriend who is quite completely insane and possibly a little queer for Sam.

In the midst of all of this, the characters physically and verbally convulse in spastic apoplexies END_OF_DOCUMENT_TOKEN_TO_BE_REPLACED

“I only include things that are psychologically true in my stories, no matter how bizarre, stupid, silly or gratuitous the episodes in them may seem… I can only hope that the spectacle of me trying to inflict pain on hard-to-reach places on my own body is amusing to some people.”–Guy Maddin

PLOT: Amateur hockey player Guy Maddin falls in love with the proprietor’s daughter when he takes his current girlfriend to a hair salon/brothel for an abortion. The daughter, Meta, will not give herself to a man until her father’s death at the hands of her mother is avenged. To accomplish this, she wants to transplant her dead father’s hands onto Guy, so that it will be her father’s hands that strangle her mother. INDELIBLE IMAGE: As Veronica lies on the operating table undergoing a clandestine abortion, the blood streaming between her legs forms itself into a Canadian maple leaf.

WHAT MAKES IT WEIRD: Cowards features Maddin’s trademark in-your-face style (a mix of silent film artifacts and glitchy hypermodern editing); crazed, dreamlike narrative (incorporating hockey matches, beauty salons, murder, infidelity, ghosts, and a hand transplant); and a wildly veering, yet somehow coherent tone that moves from melodrama to slapstick to absurdist vintage pornography to Greek tragedy in the space of a few frames. If that’s not enough, there’s the fact that the entire story is observed by a scientist, who witnesses it being played out while looking through a microscope at a dab of semen on a slide. Weird enough for you?

COMMENTS: Maddin’s Cowards Bend the Knee is a dream, and like all dreams it is at the END_OF_DOCUMENT_TOKEN_TO_BE_REPLACED