PLOT: A pack of violent misfits take a bullied boy into their gang on the rough streets of Reykjavik. 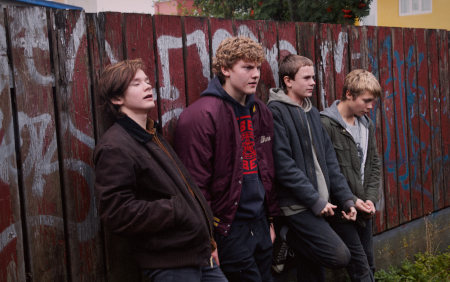 COMMENTS: When you grow old and think back on your childhood bullies, you realize that they were bullied themselves, most likely by their own parents or siblings. The hate and scorn was nothing personal; they were only transferring their own pain onto someone conveniently weaker than them. Of course, that idea never crosses your mind when you’re a victim of bullying, and wouldn’t comfort you if it did. Because the foursome in Beautiful Beings are, for the most part, both bullies and victims, we can sympathize with them and forgive them as they indulge in childish cruelties.

Iceland consistently ranks in the top ten in the World Happiness Report, but even paradise has an underclass. Violence is ever-present in the lives of these working-class children from broken families. The film begins by following the misadventures of pimply 14-year old Balli, much-abused by his peers and living with neglectful single mom in a what his friend calls “a bum house.” But the story soon changes focus to Addi, who has a modestly better life. He’s a member of a three-member gang under the erratic but benevolent leadership of Konni, nicknamed “the Animal” due to his fighting prowess and uncontrolled ferocity. Although he’s also from a single parent home, Addi’s mother is caring and stable, if a little embarrassing in her devotion to mystical rituals, yoga, and dream-interpretation. After Balli is beaten so badly he makes a local hand-wringing news broadcast about teen violence, Addi’s empathy is slowly and slyly roused. He convinces the others to let Balli into their clique—helped by the fact that they can use Balli’s half-abandoned home as a club house when the boy’s mother is away for days on end. The others gradually come to accept Balli, but their individual troubles start to pile up, all brought to a boil by the reappearances of absent (and unwanted) family members.

As the film progresses it flirts with the supernatural. Addi discovers that his mother’s precognitive gifts may not be all in her head—and that he’s inherited them as well. At about the midpoint of the film (with a push from magic mushrooms) his powers manifest themselves: he sees demonic shadows, finds his fingers drilling holes in his torso, and dreams of racing down a skyscraper with Konni. The visions are scarce, but set up the idea that Addi can see into the future, creating third act suspense whenever he gets a “bad feeling.” His precognitive abilities symbolize his superior intuition, setting him apart as the character who is in this world but not of it… the one who’s able to see what’s wrong with this picture and thus, perhaps, able to glimpse a different path. That’s not much to grasp onto as far as the film’s weird credentials go, but it’s just enough to get it into 366’s sights. (The movie also flirts with teenage homoeroticism—e.g. some casual sensuous hair caressing—without really exploring those feelings, making it  LGBTQ-adjacent as well as weird-adjacent).

Other critics have pointed out—and I can’t really argue—that Beautiful Beings breaks no new ground in the “coming of age” genre, and that its visionary aspect is mostly just window dressing. Nevertheless, I think the movie’s ample strengths outweigh a certain lack of originality. Technically, it’s nearly flawless. (It was Iceland’s submission to this year’s Oscars, although it was not shortlisted.) All the performances, especially from the young central quartet but including the extended families and the surrounding teenagers, are excellent. The cinematography plays with yellow sunlight and sepia shadows; perversely, the camera focuses on dirty fingernails, the dusty corners of Balli’s hovel, or an industrially bleak warehouse rooftop overlooking the harbor, only occasionally emerging onto a majestic beach to remind us of the beauty of the wider world these boys rarely have the chance to appreciate. The bottom line is I found myself engaged with these characters and empathizing with them through their travails, which is all you ask of a film of this sort.

“Here, with a combination of drifty realism and jolts of the fantastic — Addi has strange dreams and visions, which add unfruitful mystery to the narrative — he persuasively conveys the feverish intimacy of adolescent friendship, with its vulnerabilities and inchoate desires.”–Manohla Dargis, The New York Times (contemporaneous)

“Folk Horror” is a buzzword that has blossomed over the past decade to become a marketing phrase. It brings to mind things British, pagan and ancient/medieval, usually in that order. This makes for a nice narrow niche to categorize and sell to the audience; if a film has certain elements that are on the checklist checked off, it’s officially Folk Horror®.  The genre even has its Unholy Trinity: The Wicker Man, Blood on Satan’s Claw, Witchfinder General. Of course, with some digging, we find that there’s a lot more to the subject to beyond those tentpoles.

It’s a massive subject tackle, and we’re fortunate that the person taking it on is Kier-la Janisse (film-programmer/editor; founder of The Miskatonic Institute of Horror Stories; author of “House of Psychotic Women“) with Woodlands Dark and Days Bewitched (2021), a 192 minute documentary serving as a primer/immersion into Folk Horror. It’s the foundation for “All The Haunts Be Ours,” a massive boxs et with 19 feature films (some making their debut on Blu-ray) and tons of bonus material. In short, this is a college semester course compressed into 15 discs; and although it’s pricey, it’s a lot less than what one would be paying for an actual college class. This is the most ambitious box set  that Severin Films has done to date—and they’ve done collections of Al Adamson, Christopher Lee’s European Films, and Andy Milligan in just the past three years!

Woodlands (the first disc in the set, also available as a standalone release) comprehensively examines Folk Horror, beginning with its roots in folklore and literature and moving into film, starting with that Unholy Trinity and other British films, plus television programs like “The Owl Service,” “Children of the Stones,” “Doctor Who,” and the work of Nigel Kneale. The documentary then shifts to North America, examining it by region: New England (Washington Irving, H.P. Lovecraft, Stephen King); the South (influences of folk music and Evangelicalism), and the West (Native American lore). After that, the film goes global, focusing on horror in Eastern Europe, Australia, Japan, and Brazil, addressing a lot of films you’ve heard of (Viy, Valerie and Her Week of Wonders, and the Coffin Joe movies, to name just a few), along with many more that you probably haven’t.

For a 3+ hour documentary, you don’t feel the time drag, and you’ll spend a lot of time afterwards Google-searching availability of titles. Even though it’s a deep dive into the subject, it also feels like it’s just scratching the surface and not even close to being the Last Word in Folk Horror. The subject is thoroughly examined, and even though you could walk away with some sort of definition, “Folk Horror” doesn’t seem “defined” in a way that traps it in a box. It’s a fluid term END_OF_DOCUMENT_TOKEN_TO_BE_REPLACED

PLOT: A childless couple living on a remote farm in Iceland become attached to a newborn lamb.

COMMENTS: Debuting director Valdimar Jóhannsson has been adamant in interviews that Lamb is not a horror movie. While that may not be strictly accurate—Lamb abuts the supernatural, relies on ominous music cues and a bit of shocking violence, and nurtures a sense of unease throughout—the lack of intent to horrify is an important consideration to get your expectations in order.

Anyone going in expecting a stately A24 horror outing a la St. Maud (2021), The Lighthouse (2019), or Hereditary (2018) will likely grow impatient in the first forty-five minutes as the movie languorously spends its time following the slow rhythms of farm life. Maria and Ingvar, all alone except for a dog, a cat, and their livestock, spend long days grazing their sheep, preparing and eating meals (including lamb chops), and servicing their temperamental tractor. The only event that breaks up the idyllic monotony is the unexpected birth of a new lamb. After pulling the babe out of its mother, Maria gets that motherly look in her eyes. The couple take the lamb inside their home and care for the newborn like a favored pet, lavishing as much affection and attention on it as they would on an infant. The cute-as-a-button critter is usually lovingly wrapped in swaddling clothes, and it’s only when we get a brief glimpse of its lower extremities that anything resembling horror starts to take root.

Things perk up a bit after the overly-long introduction, helped by the arrival of Ingvar’s ne’er-do-well brother, who crashes at the farm and, like the audience, looks askance at the couple’s unnatural attachment to the animal. Things still proceed relatively slowly, but the viewer’s interest is held by dreamy visuals of the verdant Icelandic valley and the strangely expressive lamb (formed from a variety of techniques, including CGI composting and puppetry, into an aberration that’s simultaneously ridiculous and uncanny). The narrative is thin, but the metaphorical implications are broad; the story is driven by a likable couple’s need for something to love. (Coincidentally, displaced and delusional parental love is also a key feature of the recent Titane). It falls just short of earning a general “recommended” tag, but for those who enjoy slow but offbeat art-house movies that focus as much on gorgeous scenery as horrific visions, Lamb may serve to fill an empty space inside of you.

“…a kind of WTF object of fascination… Even the (excellent) trailer from boutique studio A24 can’t find a way to entirely hide the movie’s hyper-bizarre premise.”–Taylor Antrim, Vogue (contemporaneous)

Rotating, flowing, and boiling imagery collected from the natural world is paired with a mysterious instrumental track. We don’t often post music videos here, but it’s quite apparent why “Black Shore” caught our attention.