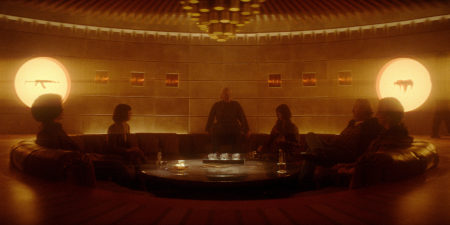 COMMENTS: At the start of each episode, Guillermo del Toro waddles in from a pool of darkness and stands before his prop cabinet, pulling out a small item relevant to the plot of the upcoming feature and a figurine representing the episode’s director. In heavily-accented, hard-to-understand English, he chokes out a few  stiff sentences about the story. Rod Serling or Alfred Hitchcock he is not; but fortunately, del Toro proves a much better curator than host.

Other than the esteemed Vincenzo Natali, del Toro and the producers choose mostly up-and-comers to script and direct the eight episodes. Although perhaps it shouldn’t, given del Toro’s Hollwyood pull, it comes as a small surprise that these short features are largely acting showcases. The series standout is Academy Award-winner F. Murray Abraham as a clever but understandably-weary coroner in “The Autopsy.” Tim Blake Nelson, lending an earthy believability and even a little sympathy to his bitter xenophobic caricature in “Lot 36,” is also worth a mention, while “The Outside” is entirely built around Kate Miccuci’s nerdy-but-secretly-sexy persona. Essie Davis, as a bereaved ornithologist, also carries “The Murmuring,” Jennifer Kent’s marital-drama-cum-ghost-story. Then, there are a couple of cameos to appeal to cult movie fans: Crispin Glover in “Pickman’s Model” and Peter Weller in “The Viewing.” The relative star power on display here lends respectability and brings in viewers from outside horror fandom: mainstream critics were particularly drawn to the “The Murmuring”‘s realistic depiction of a husband and wife tiptoeing around their issues while burying themselves in their studies of bird-flocking behaviors on a Bergmanesque island.

When we first saw the names attached to direct, we were salivating over the inclusion of Ana Lily Amirpour and (especially) Panos Cosmatos (as well as the prospect of Crispin Glover in an H.P. Lovecraft adaptation). Those two directors do deliver both weirdness and quality, but the other episodes are all worth watching. Even the least of them have something to offer, usually in the acting department. The Glover episode is “Pickman’s Muse.” As previously mentioned, it’s a Lovecraft adaptation of the “man is driven mad by peering into the Beyond” variety that is eerie and atmospheric, but END_OF_DOCUMENT_TOKEN_TO_BE_REPLACED

PLOT: Against a Cold War backdrop, a mute cleaning woman forms a relationship with an aquatic creature she finds imprisoned in a military facility. WHY IT WON’T MAKE THE LIST: Although Water gets points for its bizarre premise—which is just enough to get it onto our radar screen—the execution is almost unfailingly conventional. It does feature 2017’s weirdest musical number outside of The Lure, however.

COMMENTS: Give Guillermo del Toro great actors,  cinematographer Dan Laustsen, and the right script, and magic is assured. After an over-extended stay in Hobbiton and some near-misses (Pacific Rim, Crimson Peak) the pop-fabulist is back on track with a unique vision that draws on the auteur’s twin loves of classic horror and fairy tales (the high-concept tagline is “Creature from the Black Lagoon meets Beauty and the Beast“).

It’s a nice role, done nicely, for Sally Hawkins, who conquers the challenge of playing dowdy, mute cleaning woman Elisa while showing moments of passion and even sexiness—all while acting across from a guy in a fish suit. Michael Shannon doesn’t stretch in his role as a sadistic army colonel and vivisectionist, but his innate unhingedness is well-suited to villainy. Richard Jenkins, as Hawkins’ closeted next door neighbor, has his own solid subplot, while Octavia Spencer rounds out the main cast with a bit of light comic relief. Del Toro perhaps humanizes his amphibious monster a bit too much in order to make the inter-species relationship palatable to general audiences, although he does play up the ick (or “ich”) factor every now and then with girl talk discussions of the gill-man’s genital quirks. The Cold War setting adds a tension and texture that would be missing if the story were set in the present day.

Water may not be terribly deep—it’s little more than an ode to unconventionality, and maybe a disguised metaphor for the love that dare not speak its name—but it’s delivered with elegance and panache. It isn’t weird, except perhaps by Academy Award nominee standards. Its thirteen nominations virtually assure it will nab something, with Original Score and Production Design seeming the most likely to this observer. Among the major categories, only a Best Director award seems likely for Del Toro, as a reflection the general level of excellence spread across the film—although there are a surprising number of pundits who consider this bestiality-themed fantasy the “safe, if a little boring” choice. A last-minute, low-merit plagiarism lawsuit may effect Best Picture/Original Screenplay voters, consciously or unconsciously.

“…with someone as strange and singular as del Toro, each film is something to anticipate and savor like a four-star feast. The good news is, The Shape of Water doesn’t disappoint. It’s both weird and wonderful.”–Chris Nashawaty, Entertainment Weekly (contemporaneous)

DIRECTED BY: None credited COMMENTS: Schlock movie fans who came of age in the pre-YouTube era of the 80s and early 90s remember the VHS phenomenon of the “trailer tape”: feature-length compilations of “coming attractions” that showcased just the “good parts” of some bad movies.  With titles like Terror on Tape and The Best of Sex and Violence, these tapes always covered B-movies (I never saw a compilation tape dedicated to tear-jerking British coming-of-age-dramas, but there were plenty packed with grindhouse-era sexy shockers); they often featured footage from obscure, otherwise unavailable titles.  They were a nice way to spend an evening when you couldn’t find something that caught your fancy at your local VHS venue, and, if you were like me, you’d jot down “must-see” titles from the most bizarre and salacious trailers (which almost always turned out to be letdowns when you saw the real thing).  Director Joe Dante (Gremlins, Amazon Women on the Moon) remembered trailer tapes, too, and decided to resurrect the dormant phenomenon with a 21st century twist: he added DVD-style commentary on the films from an array of his knowledgeable Hollywood buddies.  Launched as a website in 2007, the Trailers from Hell project has now annotated hundreds of films, mostly B-movies, but with a sprinkling of classics like Casablanca and even the occasional weird art film like Valerie and Her Week of Wonders.  The free trailers on the website are representative of what’s available on Vol. 2—although these selections are exclusive, there’s nothing especially premium about the ones chosen to be burned to disc.  Each pundit provides basic background on his or her movie, some trivia, some opinion, and a lot of enthusiasm: John Landis cracks himself up remembering how he responded with awe to the British Godzilla ripoff Gorgo as a kid.  If you don’t like it when loudmouths yammer over the coming attractions, you can turn the commentary off for a true circa 1989 trailer tape experience.  Films covered include several Hammer films, creature features, and the occasional overlooked mainstream film or blockbuster hit like Jaws.  The trailer of most interest to weird movie fans will be Guillermo del Toro‘s reverent analysis of Dario Argento’s Deep Red (“a very strange movie made by a very strange, and thin, man… doesn’t make logical sense, but makes lyrical sense.)”  Other commentaries you may want to check out are writer Larry (Ed Wood) Karaszewski’s take on Polanski‘s The Tenant, Lloyd Kaufman discussing his own Terror Firmer in his typical carnival barker style (he provides the collection’s only trailer with graphic violence and nudity), and Mick Garris on Flesh Gordon, the only-in-the-70s porn parody mixing silly sex with some remarkable Ray Harryhausen-inspired stop-motion effects (leading Garris to the odd observation, “the great god Porno and the penisaurus really [stand] out”).  Trailers from Hell defies recommendation: you’re either a B-film geek who finds this stuff fascinating, or you have no idea why anyone would actually spend money and waste an hour watching experts discussing ads.

Many people will find the “extra” feature more intriguing than the main feature.  It’s a remastered version of Roger Corman’s cult classic man-eating plant horror comedy The Little Shop of Horrors, presented (for the first time on DVD) in its original widescreen format.  It’s unclear just why Little Shop has never been released in anamorphic widescreen before—it seems whoever had access to the original prints would have thought of putting it out a long time ago to stand out from the glut of full frame public domain copies made from old TV prints.  I guess a widescreen Little Shop wasn’t considered economically feasible as a standalone release, but as an extra, it’s horribly cool.

DISCLAIMER: A DVD copy of this film was provided by the production company for review.

“I’m more interested in truth than in reality.”—Guillermo del Toro, Time Out interview

PLOT:  While blood trickles backwards from the ground into a prone girl’s nostril, a voiceover tells of a princess of the Underworld who escaped to the mortal realm and forgot her divinity. We then meet Ofelia, an eleven-year old girl who is traveling with her pregnant mother to stay with her new stepfather, a brutal Captain in the employ of the dictator Franco, who is hunting the Communist/Republican resistance hiding in the forest around a Spanish mill. With her mother’s difficult pregnancy and the cruel Captain’s indifference to her needs, Ofelia’s life becomes intolerable, until she is visited by a faun who promises to restore her to her rightful place as an immortal fairy princess if she can complete three tasks. INDELIBLE IMAGE:  The Pale Man, murderer of children, who sits eternally in front of an uneaten banquet with his eyeballs lying on a golden plate in front of him.

WHAT MAKES IT WEIRD:  Pan’s Labyrinth is the textbook example of our rule that the better a movie is, the less weird it has to be to make the List of the 366 Best Weird Movies of all time. On one level, by blending a realistic wartime drama with a fairy tale that could almost be viewed as a conventional fantasy, the movie could be seen as merely novel, rather than weird. The way that Ofelia’s “fantasy” terrors bleed into and ominously echo the real world horrors of Franco’s Spain creates a sort of a weird resonance even when we are lodged in the “real” plot. The film is also suffused with weirdness’ close cousin, ambiguity, in that it never proves the realm of fairies and fauns to be a phantasmagoria; the evidence is deliberately conflicting on whether these wonders are all in Ofelia’s  head or not. The film is filled with masterful, memorable, visionary images, such as the moving mandrake root that resembles a woody baby and the giant toad that coughs out its own innards, though such marvels might be glimpsed briefly in a regulation fantasy films. Those elements are enough to nudge Pan’s Labyrinth from a mainstream fantasy in the direction of the surreal, but it’s the nightmare centerpiece with the Pale Man that tips Pan‘s scales into the weird.

COMMENTS:  You can have brilliant cinematography, masterful acting, awe-inspiring END_OF_DOCUMENT_TOKEN_TO_BE_REPLACED