DIRECTED BY: Mattie Do

PLOT: In the remote Laotian countryside, an old hermit and a young boy are united by the fact that only they can see the mute woman wandering the long dusty road to the nearest village.

COMMENTS: We recommend not reading the official synopsis for The Long Walk posted on the IMDB, Rotten Tomatoes, or the distributor’s own website, as it seems to carelessly give away major plot points. Perhaps the promoters thought there was no other way to get American viewers interested in a Laotian movie, most of which takes place on a barren dirt road, than by giving away the main twist. Regardless, this is a movie you will likely enjoy more the less you know going in.

The movie opens on an older man (a haunted Yannawoutthi Chanthalungsy) stripping motorbike parts in the jungle, just off the path. He leaves an orange at a roadside shrine, then checks the time on his wrist—not on his wristwatch, on his actual flesh, in one of the few indications that this movie takes place in the future. Selling his scrap in town, he learns that the local noodle shop owner is sick and demented and on her last legs. He lives alone in an elevated hut where he vapes, brews strange teas, and ritualistically tends items in a cabinet shrine, including a female figurine. The locals believe he can talk to the spirits of the dead.

The action then shifts to follow a young boy living on a farm. He prefers exploring the jungle to hoeing the fields; his mildly abusive father thinks he’s lazy and good for nothing, but he’s devoted to his mother, who sells the family’s vegetables at a roadside stand. The family is barely getting by, the mother is ill, and there is no money for medicine. The boy makes a macabre discovery in the woods, and soon after he begins seeing a pretty but mute woman standing in the road. The old hermit from the previous paragraph sees her, too; and soon she brings them together, as the nature of the old man’s shamanic practice comes clear.

The Long Walk is set in a world where government-issued microchips coexist with ghosts; a world like our own but with a touch of sci-fi shamanism. The movie slips into its liminal spaces—life and afterlife, past and present, and through genres like drama and horror—gracefully, but also sometimes perplexingly. As with all time travel tales, it traffics in paradox; the movie’s morality, too, is far from black and white. It takes some patience to tease out basic plot elements, but clues and new developments are laid out at regular enough intervals that my attention rarely wandered off the dusty path that winds its way through the decades. The third act takes a potentially controversial turn towards horror; it provides a resolution to a subplot about the daughter of the noodle shop owner, which was otherwise a welcome digression from the main plotline, but has the disadvantage of forcing our protagonist into a heel turn that feels a bit too arbitrary and severe. Still, this decision adds to the mystery and complexity of the story and feeds into its theme about the unpredictable effects of good intentions, as it leads us to an inflammatory ironic conclusion.

The background Buddhism, and the presence of the mundane and the mystical in the same frame, will put viewers in mind of Thailand’s Apichatpong Weerasethakul, although Do’s work is a more plot-driven and less audaciously poetic. I found the ambiguously emotional payoff to be well worth the effort, but the impatient should beware: the title does not lie, it is indeed a long walk.

“Ghost stories — and especially those aimed at art house audiences — might benefit from a little ambiguity and a certain poetic strangeness. But it’s a problem when the story becomes nearly impossible to follow for long stretches of time.”–Boyd van Hoeij, The Hollywood Reporter (festival screening)

PLOT: Diagnosed with Alzheimer’s, an elderly bohemian decides to end his life, and stages a celebratory “fun-eral” party ending with his suicide. 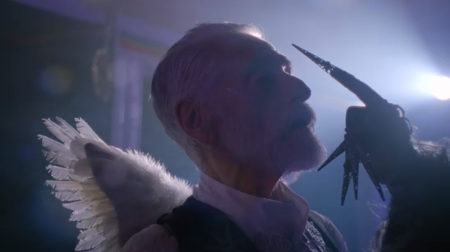 COMMENTS: Moon Manor has a strong point of view, and for better or worse, it sticks to it. It’s structured not as a movie, but as a memorial service. It’s both didactic and celebratory. Jimmy, a former singer and moon real estate salesman, suffers from dementia that’s only getting worse. Deciding to take control of the end of his life, he avails himself of liberal West Coast laws allowing physicians to prescribe lethal doses of barbiturates and invites his friends over to celebrate his last day on earth. Along for the final ride are a death doula who reads from the Tibetan Book of the Dead and a neophyte local journalist covering the eulogy beat who hopes to leverage Jimmy’s death into a feature article. Most of Jimmy’s old friends are dead, but younger folk touched by his mentorship come along to the party to give testimonials, a drag queen supplies entertainment, and Rikki Lake shows up to give some words of encouragement. Jimmy is a swell guy and no one has a bad word to say about him, as is appropriate. We get to know him through flashbacks (Jimmy met the love of his life at an audition for “Hair,” a musical whose revolutionary potential he still staunchly defends). The only pushback to the general sense of how wonderful the whole suicide plan is comes from a pair of evangelical protestors who park outside his house and shout Bible verses through a bullhorn—although these antagonists are quickly overcome and sidelined. (They are basically intolerant, unempathetic strawmen, although one of them does receive some unexpected character development).

The movie has a heavy neo-hippie, New Age vibe, which can come across as a bit naïve but is in keeping with its subject’s spirit. Moon Manor is a feature-length advertisement for a radical species of death with dignity, and, though one-sided, it successfully makes the decision seem rational. But is it weird? Not if you’re the kind of guy who recognizes the pot of San Pedro cactus growing in the corner of the kitchen. There are a few fast-cut montages with colored lights, and there’s a shambling apparition hanging around (Jimmy assumes it’s Death, but it names itself “Intuition). The editing in the hallucination sequences is indie-psychedelic standard, competent but not transcendent. It’s not as weird as you’d expect from a movie co-directed by someone named Machete Bang Bang.

Moon Manor aims at persuasion, and how well you like it will depend on your position on the right to die (and on whether you think opposing viewpoints should at least get a fair hearing). But it’s also a living eulogy for an extraordinary man, which makes the movie harder to criticize or dislike. Jimmy is endearing and authentic, because he is playing a version of himself: many of the details, including his love story and his career as a working musician, are taken from the actor’s real life. Knowing the factual basis of the fictional story makes it easier to accept the film’s argument: this may not really be happening, but you know the actor you’re seeing onscreen wholeheartedly endorses the scenario. Fortunately, there is no indication that the real-life Jimmy has advanced Alzheimer’s, or intends to die soon.