Film Is a Man’s Best Friend

By now, I should be able to slow down to mere double features to match last year’s tally; but that would mean slowing down.

I’ve been mulling over what to say about this movie for close to twenty-four hours and I’ve still got nothing. My fear is, I suppose, that if I started going on about the various misteps, I might not stop, and that would send an inaccurate message about Jennifer Reeder’s earnest, feminist, melodramatic feature debut. Various crummy home lives are explored as we observe a small cross-section of No Name, USA, in this movie about people making decisions of varying degrees of emotional stupidity during the aftermath of a student’s disappearance and death.

But why do these women (and they are predominately women) insist on conducting their lives in such a way? From all the narrative facts revealed, they each have far more agency than they care to take advantage of. There’s a quasi-rape scene of a young woman set up to dismay the audience, but there’s also a quasi-rape scene of a young man that is just dropped by the wayside. I’ve noticed acutely since this Festival began that there’s far too large a market for emotional movies about emotional idiots. I wanted to care about these people, and I managed to do so briefly for some of them, but when they keep shooting themselves in the foot over and over, I can only invest so much sympathy. (And frankly it didn’t help that the filmmaker dissected, a-capella’d, and dirge-ified Modern English’s new wave classic “I Melt With You.”) If anyone wants to tell me in the comments what’s up with this movie, I would be very happy to talk with you. 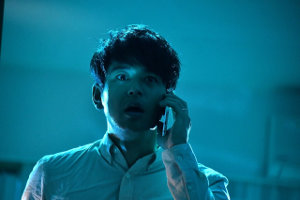 And boy did it. And in so coming, my faith in J-Horror was restored. Obviously this is mainstream fare—I wasn’t jumping out of my seat or suffering nightmares afterwards—but it had an unsettling edge to it, characters who evolved, and a really gangbusters finale involving exorcists from all known religions, cracking timbers, and blood-soaked caterpillars. Director Tetsuya Nakashima made what will be looked upon fondly as one of my favorite Christmas movies (yep, things come to head on 12/25), as well as one of my favorite dream sequences, where we can see the rice-omelette visions of a cheerfully sleeping two-year-old girl. I’ll admit it was a bit long-winded, but that allowed for a rare, full dissection of all the characters’ motivations—and while I didn’t find them entirely END_OF_DOCUMENT_TOKEN_TO_BE_REPLACED

PLOT: Chan Hung, a gangster, sees his brother paralyzed in a kickboxing match with a cheating Thai fighter. Later, he is rescued from a rival’s ambush by an apparition of a Buddhist monk. Chan Hung travels to Thailand to challenge the evil boxer, but while there he discovers that a local Buddhist temple has prophesied that he will defeat a black magician who has waged a longstanding war against the holy sect. INDELIBLE IMAGE: Covered in maggots which buzz like bees, a nude woman is magically birthed from the sealed corpse of a crocodile after an elaborate and disgusting ritual involving (no joke) a regurgitated chicken rectum.

WHAT MAKES IT WEIRD:  The Boxer’s Omen is pure Shaw Brothers desperation and delirium, an excessive black magic oddity that holds nothing back, with gratuitous nudity, kung fu, rough sex, vulgar Buddhist mysticism, and ample viscera.