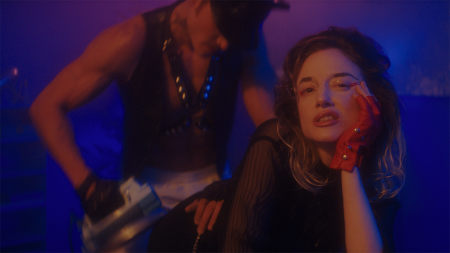 COMMENTS: Please Baby Please is queer, defiantly so, in both the new and the old senses of the word. This movie is proud to be what it is—which is a perverted, experimental non-binary comedy/melodrama/musical, or something like that. This is a film that describes itself as featuring “bisexual lighting,” and that somehow makes perfect sense when you see it. It seems like the script was written to answer the question, what would happen if the leather daddies from Scorpio Rising took over the set of West Side Story?

That last connection is referenced explicitly in the movie’s opening scene, where a leather clad gang prowls the streets in finger-snapping rhythm. These aren’t the Sharks or the Jets, though, but the Young Gents, an ultra-macho bunch of reprobates with a dangerously non-hetero vibe. When happily (if platonically) married couple Suze and Arthur come across the gang standing over a couple of freshly beaten corpses on the street right outside their apartment, their libidos are separately ignited by the heart-pounding excitement. Please Baby Please doesn’t feature a lot of narrative; there is an arc to the couple’s journey, but most of it is revealed through oddball exposition (most of the characters in this movie talk like Dead End Kids enrolled in NYU’s Gender Studies masters’ program). Much of the rest comes in musical production numbers: Suze’s sexual awakenings are depicted in a series of musical fantasies, including one where the Young Gents take turns ironing her ass.  We’re also treated to interludes like a drag queen in a Bo Peep bonnet and flowery eyelids singing a love song in a phone booth. The fine musical accompaniment ranges from exotica to mellow acoustic bass jazz to poppy torch songs; the choreography is simple but effective, more dependent on the dancers’ outrageous wardrobes than on the moves they perform. True to the 1950s style, everything is repressed, and there’s little actual sex: we come upon two motorcycle dudes doing nothing more than hugging passionately in the men’s room. The characters do talk dirty, but in the context of gender roles rather than personal desires. Only the final scene breaks the no-onscreen sex rule.

Please Baby Please is obsessed with masculinity. Arthur has built his entire life philosophy around how doesn’t want to be a man, doesn’t want the pressure of always having to be a contestant in a toughness competition with other males. That doesn’t mean he’s not attracted to masculine surfaces, though; to the rippling abs, mesh-clad pecs, and leathery bulges of the Young Gents. The motorcycle gang stands for the masculine ideal in all its muscly, sneering, rough-mannered charm. In 1953, Marlon Brando in The Wild One evoked an outlaw desires for rebellion and domination in female audiences; Tom of Finland was simultaneously (and more lastingly) co-opting the same biker imagery for the gay subculture.  Please Baby Please is aware how ludicrous a caricature of manhood all this chrome and black leather is; that’s precisely why it’s fascinated with this iconography. This objectifying beefcake spectacle is especially weird because it’s shot through multiple lenses: a female director looking at men through the homosexual male gaze.

Handsomely geeky Harry Melling ably handles his duties of playing a closeted homosexual in a rewarding but familiar way, but much of the praise for Please Baby Please comes for Andrea Riseborough, whose over-the-top vamping wins over even the film’s detractors. Her acting choices all seem to be formed by asking the question, “how would Nic Cage play this scene if he were a housewife caught in a sexless marriage?” She gyrates in a corset, howls at the moon, breaks into a spontaneous Bert Lahr impersonation, and acts crazier and crazier (and more and more like a man) as the movie progresses. This risky material could sag limply if not aroused by hyperbole, so it’s hard to imagine the movie succeeding without Riseborough’s committed insanity setting the tone.

Demi Moore‘s cameo was much-hyped, but underwhelming; the most significant thing is the vote of confidence she casts by lending her name to this esoteric project. We did notice an old friend showing up as co-writer: Noel David Taylor. Please Baby Please is currently in a limited run exclusively in theaters; we’ll update you when it becomes more widely available.