“Alfred Eaker’s Fringe Cinema” is a column published on Thursdays covering truly independent cinema: the stuff that’s so far under the public radar it may as well be underground.   The folks making these films may be starving artists today, but they may be recognized as geniuses tomorrow.  We hope to look like geniuses ourselves by being the first to cover them.

Jim and Robin approached me about six weeks ago, inviting me to participate in this year’s 48 Hour Film Festival.  Since I assisted in last year’s event with them to do Hallow’s Dance, I was a tad reluctant to do all this again.  However, they shrewdly threw out a couple of temptations when they told me they wanted to do something surreal, which is my forte, along with inviting me to write and direct with Robin.  Jim would be producing.  If I recall correctly, my response was something akin to “Oh, alright, goddammit.”

For those who don’t know the set up of the festival, it goes like this: the teams go in on Friday night at 7:30 pm and draw a genre out of the hat.  Jim drew Horror, which was apt as this is Jim and Robin’s forte. Then, everyone is given the same character name, his profession, a line of dialogue, and a prop.

The character name was Professor Sherman Kane, the prop was a ball and the line of dialogue was “I’m not talking to you”.  Now the teams leave, write their script, shoot it, edit and turn it in by 7:30 pm on Sunday night.  Showing of films: Wednesday and Thursday evening at the IMA.

I would imagine the whole idea for said festival came from Roger Corman.  The story is well known among film aficionados.  Corman had finished The Raven 48 hours ahead of schedule, with the actors, including Boris Karloff and Jack Nicholson, still on contract for the remainder of the shooting schedule.  That night Corman went home, wrote a script called The Terror, came back the next day and shot it within the 48 period.  The problem with this story is that The Terror is indeed a terror to watch and Corman actually took several months to edit it.

Taking that lesson, the 48 Hour Film Festival seems an open invitation to produce mediocre films; and indeed, 98 percent of the resulting films have tended to bear that out.  The vast majority of the 48 Hour films are unimaginative, low budget films which attempt to look, act and think like Hollywood films without tinsel town backing.  Since Jim and Robin agreed to do something aesthetically challenging, and expressed no desire for trying to win an award, I felt we could take an enthusiastic, earnest shot at it.

I knew I wanted to work with avant poet John M. Bennett, who I  collaborated with on Jesus and Her Gospel of Yes, W

the Movie, Stations (in post production) and The Water Scene (in pre-production).  John and I have become comfortable with each other by now, so he agreed and sent recorded poetry.

We had a small cast of myself, Jim, Robin, Jennifer Davis, Randy Cox, Nathan Duncan and Victoria Elliott.

Robin, Jim and myself hashed out a few random visual thoughts before I literally kicked everyone out, wrote the script 9, and finished it up about midnight Friday night.

Robin, who is big into numerology, shared with me the malevolent, almost apocalyptic qualities of the number 9, thus supplying the title.  I was not aware  until the following day that Tim Burton was making a film with the same title and wouldn’t know as I lost all interest whatsoever in the esteemed Mr. Burton quite some time ago.  Naturally, I was duly informed of  the upcoming Burton opus on Saturday.

Our 9 is a western fable of horror and redemption.  I took Bennett’s poem “Meat, Mute” and sprang from that, doubled up on the Sherman Kane character and created a father-son relationship between Jim’s character and my own.  In a previous short film I did with Liberty or Death, called First Friday (in post production), Jim had teamed up with Robin’s character and I with Jennifer.  Here I did a reversal and we acted as the ladies’ tormenting husbands.  Randy Cox (who I worked with in W, the Movie, The Gravediggers, and Curse the Werewolf , the latter two for The Asylum House), was cast as death, Nathan Duncan as a death child (symbolically the younger version of Sherman Oliver) and Victoria Elliott as a Franciscan nun.   Scott P. Allan supplied still photography, Victoria supplied both locations and costumes.  Jim manned camera and edited with assistance from Robin and myself on both.

My goal, with my own character, was to create a sort of deconstructed variation of Tom Mix.  With no apologies to Tom Mix fans, I suggest you  take your deconstruction like a man.  Robin, Jim, and I agreed on using black and white film, later decided on sepia tint, along with irises and primitive silent film aesthetics.

The resulting film will, hopefully, be temporarily posted on this site next week (we’re doing some fine tweaking and it should be a few seconds shorter in the final cut).  Perhaps the biggest compliment our film was paid came from a departing group chanting “Meat, Mute”.

Thursday Night, Aug 6th:  Unfortunately, this year’s Indianapolis 48 Hour Film Festival predictably bore out the 98 percent dreck ratio.  A couple of films stood out, mainly I’m not talking to you which cleverly played up on the assigned line of dialogue, but was a bit worn on cutesy sleeve and Sea of Green, which had a quaint poetic quality.  However, the bulk of the films were execrable examples of Independent cinema at it’s worst, following every tried and true formula which Hollywood and it’s wannabes have been blindly following and mass shitting out for the last 40 years or more.  Instead of anything remotely resembling a challenge, we were subjected to 4 and a half hours of  “decorative and relaxing” stale, popped corn.

The 48 Hour set up, with it’s sophomoric genre labels, all too easily invites pedestrian results.  Of course, the challenge to produce a short within the constraints and time-frame is the main goal and for that there has to be some sort of commendation for at least posing challenge of sorts, even if it only has all the equivalence of a glorified paint-by-number set.  The Big Car Art Gallery and Jim Walker should be highly commended for highly proficient organization. 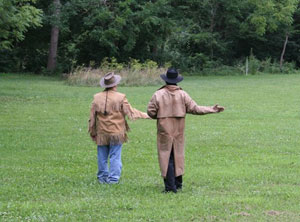 The 48 Hour event could and should be one of those events in which art transforms societal conventions, expectations. The “festival” hardly qualifies as an experience, let alone a gaged, or profoundly aesthetic one.  It held no communitarian implications.

Instead, 2009’s 48 Hour Indianapolis Festival was merely a lethargic passing of time.  Perhaps the festival itself needs to be challenged.

Runner Up for Best Film
I’m Not Talking to You, by Spontaneous Combustion & Magnet Films.

Best Film
Gno Man is an Island by Talk to Todd Productions.

We're in the nominations/RSVP phase for our next Weird Watch Party, scheduled for Dec. 11 (rescheduled from the 4th!) at 10:15 PM ET. As always, we are looking for five likely attendees, so RSVP even if you don't have a suggestion for a movie to screen. Join the discussion here.