PLOT: Picking up where Season 1 left off, Alma continues to investigate the past, uncovering more family secrets as she travels through time. 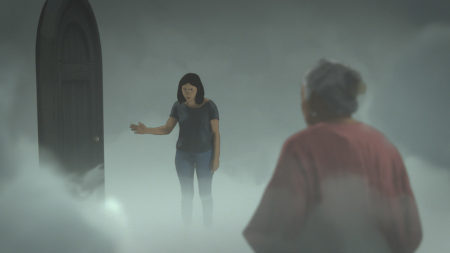 COMMENTS: When we last saw Alma, she was sitting in front of an Aztec ruin in Mexico, waiting to see if her dead father was going to walk out of a cave. If he doesn’t emerge at dawn, it likely means she’s schizophrenic.

We can’t tell you if Jacob walks out of that cave, but we can say that in Season 2 Alma will go on more adventures through time, exploring other family secrets, and that this season forefronts a couple of characters—sister Becca and mother Camila—who played supporting roles in the previous series. We’ll also meet other members of the extended clan, both ancestors and newcomers, as Alma and Becca travel back further into the family’s past to uncover generational scandals and traumas.

Season 1 relied, to a large extent, on the ambiguity of whether Alma was going insane, hallucinating from a coma, or whether her dead father really was teaching her to harness the mystical powers hiding in her ancient Aztec blood in order to travel through time and create a new timeline where he survived his car crash. With that arc completed and that ambiguity no longer sustainable, it’s inevitable that some tension drains out of the series. Furthermore, Alma shares the spotlight this go-around, and the confused bursts of anger and sarcasm that made her character so endearing are greatly missed. (Here, she is too often relegated to playing the role of motivational speaker, trying to convince others to go along with her bold schemes.) Season 2 largely replaces that reality-or-insanity dynamic with a traditional mystery structure—with the twist that the investigation requires slippery, loosely defined time travel powers and confrontations with metaphors (an “unopenable” door is a key symbol). The demands of the narrative make a refocus necessary, but although Season 2 is less mysterious than the original, returning writers/creators Kate Purdy and Raphael Bob-Waksberg keep us invested as the saga takes a slight shift into melodrama and ancestral mystery. Returning animator/director Hisko Hulsing assures that the visuals keep up the high and distinctive standard set by Season 1, with the rotoscoped actors remaining oh-so-slightly uncanny even when washing dishes or plinking out a tune on the piano. And he conjures up more than a few trippy landscapes, with lots of fog-shrouded temporal voids and one impressive M.C. Escher inspired psychescape.

“Undone, Season 2” successfully solves its central problem of revisiting a scenario that, frankly, seemed perfectly whole in its original eight episode run. This story could easily have been refashioned into an independent project, but it is richer for continuing with the characters we’ve grown attached to (even if the most popular ones sometimes get shuffled to the background here). It’s not the revelation Season 1 was, but it does have more than enough magic, old and new, to make it worth a visit. It helps that the efficient eight episodes, barely exceeding 20 minutes each, make for a highly bingeable package. And fans need not fear: the second season’s ending leaves no doubt as to the creators’ intent to continue the story. The final episode is one long setup for a new plotline, one that has the bonus of returning star Rosa Salazar front and center.

“With some new help, this time around, the show’s metaphysical trips examine the festering wounds in Alma’s family tree as well as within Alma herself, doubling down on its surreal premise on a new non-linear journey that creates puzzle pieces of their personal histories.”–Kambole Campbell, IGN (contemporaneous)