PLOT: Two FBI agents/weirdos harass criminals and innocents alike as they search for a couple of murderers to whom they might have ties. 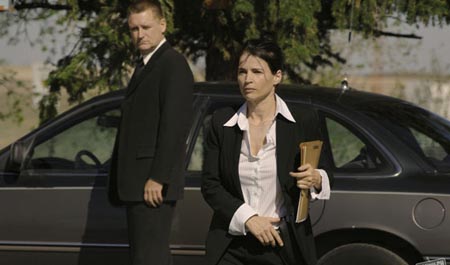 WHY IT WON’T MAKE THE LIST: Think CSI or NCIS meets Natural Born Killers. The weird quotient is totally crushed by the earthbound whodunnit quotient. It shows promise early on, and while the subtleties of the genre don’t escape my grasp, I don’t think that, in a truly weird movie, I should be asking “whodunit?,” but rather, “what the hell’s going to happen next?”

COMMENTS: Surveillance is the sophomore directorial effort by possibly-nepotistic director Jennifer Lynch, her first being the acclaimed/notorious Boxing Helena. This little nugget of info was what really interested me about seeing Surveillance, and I was hoping, no, begging for it to be just as weird as Helena without, hopefully, the punch-in-the-dignity twist ending.

What I got, unfortunately, was a moderate amount of sadism and unusual behavior, but a decidedly pedestrian tone. It’s a pretty good film, but it’s simply not weird enough to keep me thinking about it or talking about it after I’ve seen it. The leads, Bill Pullman and Julia Ormand, are good, and I like the dangerous chemistry between them, but it’s nothing I haven’t seen before verbatim in other movies. The stand-out here is the vicious Michael Ironside, who plays the torturous Captain Jennings, a psychotic cop with a penchant for roughing up people and generally acting schizophrenic. I love his character, and I love his particular intensity that recalls his heyday, circa Scanners.

The script, also by Lynch, is devious, with plenty of funky, uneven dialog that recalls, in small doses, her father‘s wording from Wild at Heart (“Those are dummies, dummy!”). Her direction isn’t bad, either, although far from inspired. She has a good time playing with different filters and tones here, but it’s pretty standard fare. Surveillance is solid feature that I actually enjoyed a bit, and would recommend as a definite rental possibility, but don’t come looking for something genuinely freaky here, because this film can’t sustain real-deal strange in large doses. Jennifer Lynch somehow manages to makes a better film than her debut, but at the expense of creating anything exceptional.

“…director Jennifer Lynch tried way too hard to follow in the deep blue surrealist footsteps of her father, David Lynch… But she finds her own voice in Surveillance, a grubby, disturbing serial-killer mystery, a kind of blood-simple Rashomon.”-Owen Gleiberman, Entertainment Weekly (contemporaneous)