FEATURING: The members of “Spindrift”

PLOT: Four musicians record sights and sounds from their “Ghost Town Tour” in a pastiche of performances, wandering about acid-infused scenery. 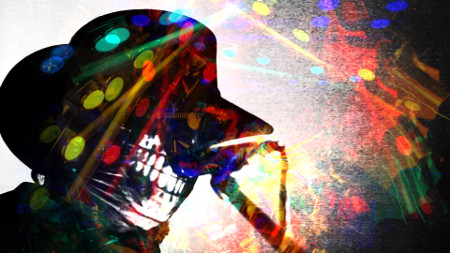 COMMENTS: What better way to write a movie review than while listening to that movie’s music in the background? Normally I don’t have the film playing while I write my reviews, but having reached the half-way mark in Spindrift’s Haunted West, I have figured out what’s going on and can be certain of two things.

The first thing: this isn’t really a movie. Haunted West begins in wide (wide wide) screen, its opening credits over what could be the establishing shot of a top-tier spaghetti western. Blue sky, jagged hillside, and a day-time moon lurking above. But Spindrift quickly show their hands in the opening scene: the band wanders around a derelict town while their music plays non-diegetically. Things move forward, in their meandering way, with shots from performances in historical saloons, shots from performances around campfires, and the occasional music-video-esque backdrop of gibbets, “Olde West” thoroughfares, and some neat-o pointy rock sites.

The second thing: Haunted West is the perfect thing to play on a grainy projector with dodgy speakers during your next Western-themed party. Delaware-born band leader Kirkpatrick Thomas must have spent a youth saturated in Western movies, Western television shows, and acid rock. His band’s sound veers from Prog-Western to Ballad-Western to Acid-Wibblies, with even some visits from what I can only describe as “Mariachi Luau.” The one constant is an Ennio Morricone vibe, as might be expected; Morricone was God’s gift to Spaghetti Westerns.

I often mention the length of short movies–whether it be a comment on efficient story-telling or a bafflement at how something so short could seem so long. Spindrift’s Haunted West moseys onto the screen, showcases some considerable musical talent, and then moseys away. This travelogue music video is a much better investment for your seventy-seven minutes than some movies I could mention, so pull out the Bulleit, slap on a stetson, and rock on, rock in, and rock out with Spindrift.

WHAT THE TOMBSTONE SAYS: