PLOT: Chuck Barris is a producer of game shows by day and a free-lance CIA agent by night; the successes and failures of his parallel careers are remarkably in-step with one another. 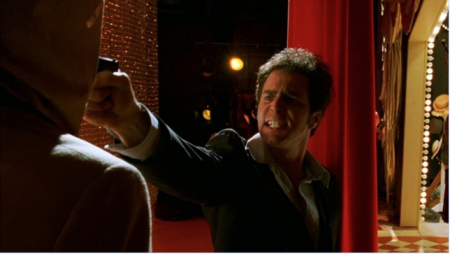 WHY IT WON’T MAKE THE LIST: With Charlie Kaufman as screen-writer and television’s slimiest visionary as the subject matter, we might have been on course for a nomination. However, director George Clooney grounds Confessions of a Dangerous Mind as conventional, hip Hollywood fare, embellished with some creative window dressing.

COMMENTS: An unlikeable protagonist, an unbelievable premise, and an odd fixation with montages add up to a dark and breezy viewing experience in George Clooney’s Confessions of a Dangerous Mind. In his directorial debut, Clooney artfully weaves a tale of Cold War intrigue, mental collapse, and really, really bad television programming. Screen-writer Charlie Kaufman’s fingerprints coat Confessions, but while self-examination-through-self-debasement oozes throughout it is simultaneously an odd character study as well as a Hollywood thriller. Chuck Barris strikes us as a skeezy guy doing the CIA’s skeezy work.

Confessions‘ budget hovers just below the thirty-million-dollar mark, but considering the actors involved, Clooney makes that outlay look altogether frugal. To accommodate, he uses a lot of novel sets to  create an illusion of grandeur, some deal-making with his fellow heavy-hitters (Julia Roberts, for instance, agreed to work for a mere $250,000), and plenty of vintage television footage. Beyond that there are the montages. In fact, the whole thing feels like a montage of montages: a montage of Barris’ rise, a montage of Barris’ CIA training, a montage of Barris’ conquests, a montage of… you get the picture. With Confessions, the point where flashback montage and current montage meet is blurred by further montage.

Perhaps it’s appropriate. Chuck Barris is constantly running just to stay in place as Sam Rockwell’s sickly charm carries the character through all the depressing motions, showcasing someone that we cannot help but loathe while simultaneously rooting for. After the suicide of an assassin buddy, he refers to him as a “stagehand.” That description is strangely apt: Barris and his cohorts were the kinds of guys that constantly lurked around the periphery, making sure the show went on without others’ awareness. Confessions of a Dangerous Mind acts as a eulogy for these men and women. All those spooks and hitmen were at heart ordinary people trapped in the giant reality show of the Cold War. And though heavily laden with regret and contemptuousness, this darkly comic biopic shows the tenderness and humanity of history’s dirtbags.

“The whole is less than the sum of its parts: the dueling Kaufman and Barris takes on self-flagellation don’t exactly mesh. This film, a shape-shifting apologia-biopic as weird as Adaptation, is too cold for its own good.” –Elvis Mitchell, the New York Times (contemporaneous)