PLOT: An unassuming campus priest is asked to help interrogate a prisoner who proclaims himself a vampire, then is forced to embark on a quest to hunt him down after he escapes. 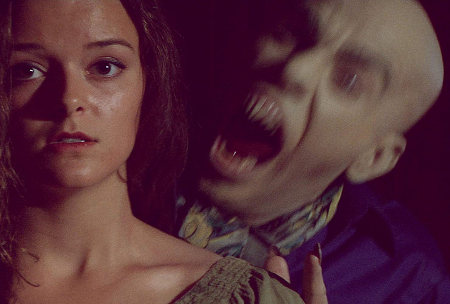 WHY IT MIGHT MAKE THE LIST: This seemingly simple shoestring-budget vampire tale takes a roundabout turn midway through, turning into an absurd neo-noir set in a world only vaguely similar to our own.

COMMENTS: In retrospect, I’m actually glad I watched Bloodsucker’s Planet before this one. Where Planet made me conscious of the issues that arise when a low budget film tries to tackle a concept outside its resources, Handbook left me appreciative of films that embrace their limited resources, using them to enhance the effectiveness—and, in this case, the weirdness—of the concept.

Clearly looking to spring its weird side on an unsuspecting audience, Bloodsucker’s Handbook starts out about as ordinary as a low budget tale of a modern vampire can get: Father Noah is approached by a group of sharp-suited G-men, who ask for his help questioning the film’s resident vampire overlord, Condu. The first half or so of the film is (primarily) concerned with this interrogation; and, simple as it is, it demonstrates ideal filmmaking sensibilities for a limited-resource indie production like this one. Working on a minimal scale, the film embraces its limitations, allowing a handful of actors and sets to carry the film.

And carry it they do. Or at the very least, one of them does. Despite his limited screentime, Jeremy Herrera, as Condu, really couldn’t be better cast. Whereas Planet’s villain had the air of a classic, Lugosian vampiric count, courteous and urbane, Condu has a more Orlok-like demeanor: leering, menacing, and blatantly evil, yet at the same time, strangely charming, in his shifty way. Condu takes charge of the interrogations right away, his delightfully evil presence dominating the screen. While Cory W Ahre’s performance as Father Noah is perhaps a little flat and understated, his passive bearing works well in these scenes as a counterpart to Herrera’s charisma. The two of them form a wonderful dynamic that genuinely sparks in the claustrophobic atmosphere of the interrogation room.

It’s around the film’s halfway point, however-–-when Condu escapes, kidnapping Father Noah’s illicit lover for leverage-–-that things take a turn for the extremely bizarre. Father Noah heads out in pursuit of Condu, and as we see more of Bloodsucker’s Handbook‘s world (which suddenly takes on a distinctively noirish tone), we learn that it is far less ordinary than it seemed at first glance. Dinosaurs and anthropomorphic animals mingle with humans in seedy bars, and sucking on toads is an epidemic addiction. At this point, it becomes clear that the film’s setting, which at first seemed quite ordinary, if somewhat retro, is in fact a bizarre alternate version of our own world.

This, of course, poses the danger of Handbook running into the same issues as Planet, undermining its coherence and effectiveness in an effort to tackle concepts bigger than its budget will allow for. However, much like the rest of the film, Handbook’s approach to its setting is self-aware; rather than attempting to delve deeply into the intricate workings of this bizarre world, it reveals its oddities in an almost incidental manner, showcasing them in casual shots. Like the protagonist, we only give them a brief glance before continuing on our journey. And like any good, weird indie ought to, Handbook embraces its limited resources and uses them to enhance the weirdness. The various non-human characters are represented by stop-motion figures, whose crude and janky motions lend them an unreal quality that fully immerses us in the feeling that this is a world unlike our own. (In one brilliantly self-aware sequence, the vampire’s historical origins are related in a stop-motion sequence that leaves the animator’s hands in the shots.)

That’s not to say that everything about the film’s second half is what I’d call precisely the right direction for the film to have taken. For one thing, it would have been nice if some of the weirdness of the setting had been at least vaguely hinted at earlier on. (In my opinion, rewatch value and post-viewing clarity are some of the most gratifying aspects of weird cinema.) More significantly, I regretted that showcasing the bizarre setting came at the cost of relegating Condu, easily the film’s strongest presence, to the background. Ahre’s performance simply isn’t strong enough to carry the narrative on its own; and while Valentine, the hard-boiled anthropomorphic dog P.I. that he hires to help him track down Condu, is an intriguing character, he simply isn’t enough to fill the void left by Herrera’s absence.

Still, Bloodsucker’s Handbook is an intriguing effort, and most assuredly the better sort of weird indie effort. I do think that the subsequent prequel grows a tad too ambitious and loses sight of what made the original film work; but nonetheless, I do hope that director Mark Beal continues this series and develops the unusual world it is set in… especially if he intends to continue the trend of including a token anthropomorphic animal who talks like a hardened noir character in every movie.

“… despite the low quality Beal has shaped surrealistic tackiness into a thrilling dark horror film experience, probably most prudently undertaken with some absinthe on hand.”–Bradley Gibson, Film Threat (DVD)