Submission for the reader review writing contest #4 by Shane Wilson

PLOT: There are two plots running simultaneously in The Tingler. In the first, Dr. Warren Chapin (Price) frees the parasite that lives in the human spine and grows when the host experiences fear, and must save the unsuspecting public from the menace he’s unleashed by stressing the importance of screaming.  In the other plot, film director William Castle raises his penchant for outrageous gimmicks to new heights by running shocks of electricity through auditorium seats. 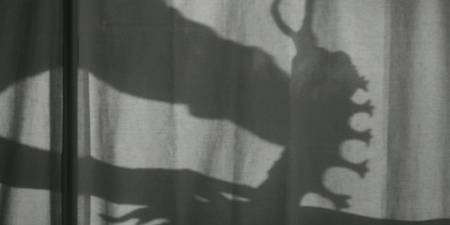 INDELIBLE IMAGE: A blank projection screen, onto which ambles the shadow of a large rubber insect puppet, followed immediately by blackness, the sound of faux audience members shrieking their heads off, and the unmistakable command of Vincent Price: “Scream! Scream for your lives! The Tingler is loose in this theater!”

WHY IT SHOULD MAKE THE LIST: William Castle always dabbles in oddness. The Tingler’s means of engaging the audience certainly ups the ante in this regard. Whereas previous auditorium gimmicks were content to merely startle theater patrons, The Tingler was now actively complicit in harming the audience, by attempting to electrocute select viewers.  On another level, though, The Tingler represents a fascinating metatextual experience. On the one hand, Percepto pushes the film beyond the boundaries of the screen by affecting the audience physically, rather than through the usual avenues of picture and soundtrack.  The movie not only breaks the fourth wall, but actually rebuilds it behind the audience. Consider Price’s admonition: “The Tingler is loose in this theater!”  He means the very theater we are sitting in.  We have suddenly assumed the role of the audience in the film-inside-the-film, and for a moment, we are actually part of the action, not merely in front of it.  Castle’s prank destroys the proscenium.  Many films play games with the insurmountable distance between the screen and the seats.  Castle is happy to throw it away entirely.

COMMENTS: Vincent Price’s legend is built on a reputation for portraying elegant, velvet-throated villains, but The Tingler stands as an unusual break from type.  Ostensibly our hero, Price’s Dr. Chapin conducts ethically-dubious experiments, engages in acid-tongued repartee with his wife, and exhibits a cavalier disregard for good judgment.  Still, in this film, he’s all the hero we’ve got (aside from his pretty boy assistant Hickman), and Price carries the film with his fully-committed acceptance of the absurd premise.  In the capable hands of Vincent Price, the battle with the ridiculous rubber centipede that plays the title character is fun, rather than ludicrous.

Castle has a lot of screen time to kill before the revelation of The Tingler’s great gimmick. So he spices up the film with bizarre interludes that range from the darkly comic to the genuinely creepy.  The fun begins right from the outset, when Castle himself introduces the film, as well as the pseudoscientific nonsense contained within.  Outwardly mild-mannered, Castle betrays a prankster’s eye, like a carnival barker daring wide-eyed innocents to enter his hall of mirrors. (He looks like John Mahoney. Interesting that, to embody a Castle-like character in the film Matinee, director Joe Dante chose the booming personality of John Goodman.)

Early in the film, we learn about the state of Vincent Price’s marriage to the shrewish Isabel (Patricia Cutts) through a bitter exchange with his spouse which sounds like a meth-fueled reading of Private Lives.

Isabel: You know, Warren, you’ve lost touch with living people. Nobody means anything to you any more unless they’re dead – and you can root around inside them with your sharp little knives. There’s a word for you.
Chapin: There are several for you.

Later, in an attempt to better understand the terrified mind, Price takes LSD, thereby providing the American cinema with its first ever acid trip, and Price with a histrionic acting showcase. (Castle is so determined to show the audience what Dr. Chapin is up to, he prints the name of the scientific monograph Price is reading on the back cover.)

In another thread of the plot, he introduces a deaf-mute character whose condition renders her physically unable to release the tension of horror by screaming (a clever device, and the woman is portrayed by Judith Evelyn, who previously went speechless as Miss Lonelyhearts in Hitchcock’s Rear Window).  Her terror is depicted in a surprising color sequence spotlighting a bathtub full of bright crimson blood.  Even if the film weren’t black & white, the vivid color and texture of the blood would be shocking, and it’s no surprise that it does Evelyn in.

But when all is said and done, The Tingler is all about its gimmick, and neither home video nor repertory cinema can re-create the expectation that yours might very well be the seat that will fire a few dozen volts of electricity into your tuchus.

“…it’s a complete original. There’s nothing like The Tingler. No film made before or after it quite matches it for its mix of the imaginative, the creepy, the funny, and the downright weird.”—Lyz Kingsley, And You Call Yourself a Scientist!

“It is as much fun – deliberate, campy, tongue-in-cheek fun – as any movie from that grand era of drive-ins and Saturday matinees. It is a very silly movie, but a movie that has no desire to be thought of as serious.”—Tim Brayton, Antagony & Ecstasy

“…William Castle at the height of his gimmick-based ingenuity…a wonderful little B film that lives up to its cult reputation in every way.”—Richard Scheib, Moria: The Science Fiction, Horror and Fantasy Film Review

Top 10 William Castle Film Gimmicks: The Tingler only places third on the list, which seems low by about two slots, but this does serve as a nicely compact-yet-comprehensive roll call of some of the master’s greatest stunts.

) hit stores in 1999 in a crisp 40th anniversary edition, including a featurette about Castle and the drive-in theater version of the fabled “Scream for your lives!” scene.  In 2009, The Tingler was packaged as one of the eight films in The William Castle Film Collection (buy

), along with such Castle classics as 13 Ghosts and Mr. Sardonicus. The set also includes a feature-length documentary, Spine Tingler! The William Castle Story.

One thought on “READER RECOMMENDATION: THE TINGLER (1959)”