PLOT: Four rednecks in wrinkled geriatric masks wander around nearly deserted streets drinking wine, demolishing abandoned television sets, tormenting the bizarre outcasts they come across in their wanderings, and humping trash. One of the humpers explains to the camera that, unlike the suburbanites sleeping in their homes, they “choose to live like free people.” By the end of the video the focus shifts to a single humper who may be having doubts about the trashy lifestyle. 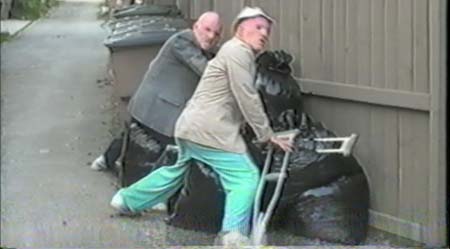 INDELIBLE IMAGE: It seems impossible to think of the title without immediately calling up the mental picture of actors in creepy geriatric masks in an alley grinding their groins against garbage bags.

WHAT MAKES IT WEIRD: Any film in which four rednecks in latex masks that make them look like escapees from a nursing home for the criminally insane force a pair of Siamese twins connected at the head by what looks like a giant tube sock to eat pancakes doused in Palmolive has weirdness in its corner.

COMMENTS: Weirdness obviously counts for a lot. For a movie that goes so far out of its way to alienate the viewer, Trash Humpers has a surprising number of fans, and even a decent number of defenders among established critics; that’s a tribute to the power of the odd imagination on display in this trashy trek through the armpit of America (i.e. the garbage-strewn back alleys of Nashville, TN). The film’s shabby, uncanny feel flows first from the faces of the wizened old farts themselves: their geriatric masks are calibrated to look almost like real makeup, but are just artificial enough so that you never figure out whether the humpers are actually intended to be old timers, or just miscreants disguised for anonymity. Watching a gang of hoodlums bumping and grinding bagged refuse would produce giggles; but, put these frightening masks on the figures and it the activity turns from silly into creepy. And violating the bags you left out for the garbageman last night isn’t the humpers only strange activity. They like to break TVs with sledgehammers and ride around eerily deserted, trash-strewn suburban streets with baby dolls dragging behind their bicycles. In the course of their wanderings they meet a boy in a Sunday suit whom they teach to slip razor blades into apples, abuse pancake-making fake Siamese twins, consort with overweight hookers who serenade them with a chorus of “Silent Night,” and throw firecrackers while a man dressed in a French maid’s costume dedicates a poem to them.

Among Trash Humpers many qualities, however, weirdness isn’t necessarily the pre-eminent one. The movie is also repetitive, ugly, pointless, unsavory, deliberately annoying, and tedious. In fact, the surrealism here is likely just another blunt weapon used to bludgeon the viewer; the film is intended as an anti-audience provocation. As such, it’s a slog to get through the rubbish: your bourgeois sensibilities may or may not be offended, but they’ll almost certainly be bored and irritated. The humpers all affect shrill Southern accents, and are prone to endlessly repetitive nonsense chants: “make it, don’t take it, make it, don’t fake it…” One of them constantly breaks into mirthless cackles. We get long, lingering shots of streetlamps, toilets, and the rear end of a man’s motionless body found in a field. We get performance artists improvising: the transvestite poet is joined by a trumpet player who toots an “extrapolated monstrosity of redemption.”  We get tap-dancing. All this makes Trash Humpers, even at a slim 78 minutes, an avant-garde endurance test. My favorite, and perhaps the most honest, reaction to the film came from Bill C. of the Film Freak Central Blog: “Harmony Korine dares you to hate this movie…and I accept.”

Mimicking the lo-fi aesthetics of VHS tape, complete with horizontal hold tracking errors and blocky-fonted “play” and “rew” legends appearing on the screen, is a great trick to give Trash Humpers an antiquarian, found footage feel, and the film’s unique look is one of its few undisputed strengths. The low-tech cinematography makes the picture alternately murky and glaring, depending on the lighting.  At times the lack of sharp detail makes shots look like impressionist paintings: yellow flowers in a field show up as garish smears. And there is a sad sort of harsh beauty in the montage of streets and parking lots at night, with sickly gold and green glows of neon and halogen casting unnatural light on asphalt and cement surfaces.

But the look isn’t the only anachronistic thing about the movie, which evokes (like a third or fourth generation dub) the punk spirits of earlier shock auteurs like Paul Morrisey (1960s), John Waters(1970s), and Nick Zedd (1980s). First rejecting conventional cinematography for the camcorder’s glare, Trash Humpers next dispenses with narrative in favor of disconnected episodes celebrating the beauty of vandalism and sadism. Korine indulges his peculiar obsessions with the grotesque and with white trash anti-culture to the hilt here; the targets of the film’s satire are dumb rednecks, and the implicit sense of classism and self-satisfied superiority grates just as it did in Gummo. In fact, Trash Humpers resembles nothing so much as the work of a budgetless student filmmaker determined to emulate Korine’s notorious first film.  But the inspired moments that gave life to Gummo, like the spaghetti in the bathtub scene, are missing, as is the stylistic variety and any semblance of emotional involvement with or sympathy for the characters.

Philosophically, the movie is reprehensible. Some generously see in it a critique of disposable consumer society, and the transvestite’s poem supports that view (“Are they not our true seed?”). But, if you take Korine at his word, he likes and admires the humpers, seeing them as the stand-ins for the outsider artist free from society’s conventions. His director’s statement calls the film “almost an ode to vandalism” and he has said in an interview, “I have a real deep love and admiration for these characters… There can be a creative beauty in their mayhem and destruction.” The director finds “creative beauty” here in vandalizing narrative (and other cinematic) conventions. The humper he portrays expresses disdain for working Americans sleeping in their comfortable suburban homes, while he prowls the night looking for something to smash. “That’s a stupid way to live… We chose to live like free people.”

The humpers’ freedom is Sadean, however; they live with no consequences to their actions, free to torment Siamese twins and kill transvestites with hammers for a thrill. They’re hick Übermensch, living outside of society’s conventions according to their own laws, but they’re too stupid and unimaginative to do anything interesting with their freedom. They smash idols (television sets) but can build nothing of their own. It’s this “creative,” poetic,” “mystical” form of destruction that Korine, the artist, identifies with in the humpers; at the very least, he finds it preferable to the boring, bourgeois existences of the unseen respectable family folk slumbering inside their homes while the elderly roam the night, raping their trash cans and peeping in their windows.

Or does he? As in Gummo, Trash Humpers features seventy to eighty minutes of grotesque, pornographic nihilism and ends with quick climax suggesting sudden epiphany, repentance and redemption. The strategy here is reminiscent of what used to be called, in old roadshow exploitation films of the forties and fifties, the “square-up” reel. A salacious feature would display with as much explicitness as possible whatever sex, crime, drug abuse, and general depravity the producers could get away with, then end quickly with a finale showing the socially corrupt anti-heroes getting their just deserts (prison, addiction, or a social disease). The punishment “squared-up” the degeneracy, in a moral sense, and the depravity could be excused as a cautionary tale. Like a bizarre exploitation film, Trash Humpers is detailed and leering when it’s time to describe surreal debauchery, but glancing when it addresses salvation. The ending almost comes off as insincere and ironic, but a biographical fact—the director was a new father at the time the film was made—suggests the conclusion was honestly intended.

Korine is very good at shining a flashlight on American ugliness, but his art seldom progresses beyond that point. All he does is look for a new skewed expressionist angle for that beam, and fiddle with the contrast.  He tries to transmutes hideousness to beauty, and in small doses he nearly succeeds (the wrinkled rubber faces of the humpers, or with the tune he himself warbles in a folk-falsetto about the “three little devils” as he films weed-strewn fields.) But a geek show is no substitute for poetry; he gives us novelty but not insight. Like the failed cinematic alchemists of ugliness before him, the universal formula remains as elusive as ever.

NOTE:  Trash Humpers originally received a negative review; that stance has been softened only slightly in this reassessment.  366 Weird Movies readers voted the movie onto the List of the Best Weird Movies of All Time, over editor’s objections, and we respect their will; even though we don’t necessarily like the film as cinema, on a pure weirdness level it’s clearly worthy of enshrinement.  We do preserve the original “beware” notice we gave the film, however.  After all, a “beware ” rating on a film isn’t a guarantee you won’t like it… it just means, well, “beware.”

“Korine works in an almost blissfully weird utopia of marginalized naughtiness here, and more craftily distills his willful transgressiveness into something strange and watchable.”–Robert Abele, The Los Angeles Times (contemporaneous)

“…the most bizarre movie you’ll see this year, guaranteed, maybe ever… proves to be less a scary, ‘found tape’ whodunit than a jaw-dropping shocksploit with one very weird agenda.”–Kam Williams, kamwilliams.com

OFFICIAL SITE: T!R!A!S!H! % H!U!M!P!E!R!S – Features the trailer, links to buy the video, three sound clips suggested for use as ringtones, and dozens of hi-res stills (available in the “press area,” which is open to all)

His Humps – Interview with the director for the New York Press

Harmony Talks Trash – Less an interview, as the title suggests, and more an expansive profile of Korine from Clodagh Kinsella of Dossier

“TRASH HUMPERS” TOO TRASHY FOR NETFLIX? – Blog report on the minor controversy regarding Netflix’s reluctance to stock Trash Humpers

) contains the widescreen version of the film (which is odd, when you think about it—oversight, or joke?) along with a xerox-style 24 page “fanzine.”  It includes a 2 minute short film called “Blood of Havana,” which features one of the masks used in the film but is otherwise unrelated in theme or style.  There are also 16 minutes of outtakes, along with the 27 minute “Mac and Plac,” which, although presented as a freestanding short, is actually one very long deleted scene showing how the Siamese twins got separated.  Though this raw footage is an even tougher slog than Trash Humpers itself, the clip does give the viewer insight into the improvisatory process.

(This movie was nominated for review by our own Cameron Jorgenson, who said “looks very promising [but] it may not make it, because Gummo is already on the list.” Suggest a weird movie of your own here.)

We're in the RSVP & nominations phase for our latest Weird Watch Party, scheduled for Saturday, Aug. 20 at 10:15 PM ET. Make your nominations and/or vote in the comments. RSVP and (optional) nominate the movie you'd like to screen here.